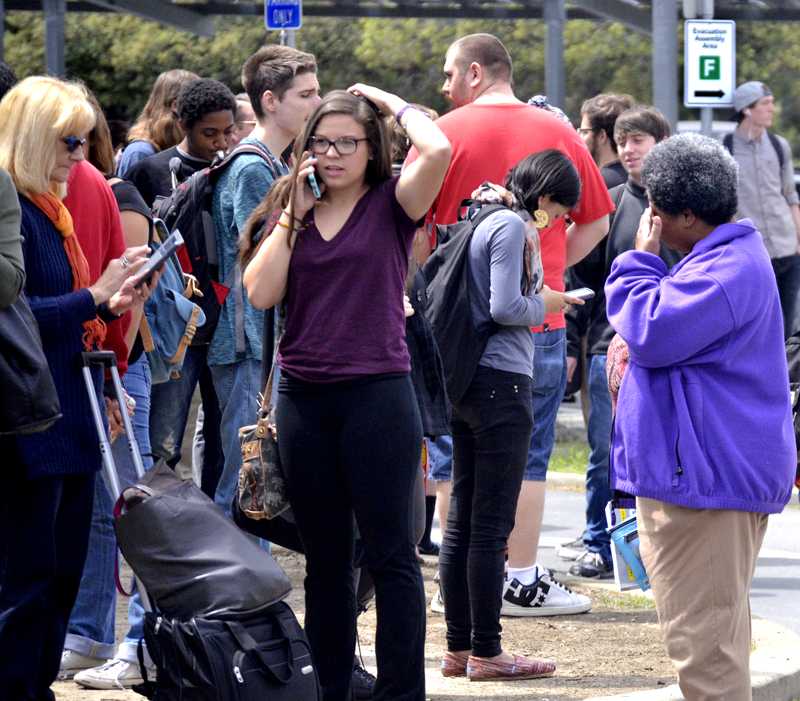 Members of the Los Medanos College community evacuated Tuesday, April 26 after a fault in the alarm system indicated a problem in the College Complex.

The College Complex was evacuated shortly after noon Tuesday, April 25 after a fault in the alarm system caused it to activate, causing confusion and classroom delays throughout the area.

Many of the students speculated as to the cause of the alarms.

Despite an odd smell around the Drama Department, Kelly Murell and Anise Gonzalez both thought it was a drill.

“Every time the fire alarm goes off, it’s always because someone burnt something in a microwave,” she said. “So that’s what I think happened.”

Both students were in their directing class and in the middle of building a set for an upcoming production when the alarm sounded.

Many students, like Murell and Gonzalez, recounted the strange smell while being escorted out to the safe zones.

Student Briana Solis said she smelled something burning, but did not know where the lingering smell was coming from.

For most, the time taken to evacuate and re-enter the building was just time away from the work they had been doing.

“I’m a bit peeved,” said Yazmyn Rahimi about the alarm because she was “in the middle of making a set.”

Behind the scenes, however, things were not as calm as they may have seemed.

There were rumors that the alarm was in response to a bomb threat, according to numerous faculty members, including Fire Technology professor Mike Grillo.

That rumor was given credence as members of Police Services, including Officers Michael Hotton and David Oleski were scrambling around the campus, looking for the problem.

Amongst the confusion, and when asked about what was causing the alarms, Hotton said there might have been a threat of some kind.

“No threats came into the college in any way, shape or form,” said Lt. Ryan Huddleston when asked about the bomb threat rumors and about Hotton’s comment.

In the end, it was determined that a fault in the alarm system caused a false positive, triggering the alarm system, this according to a source in the maintenance department.

‑ Adria Watson and Tyler Mortimore contributed to this report