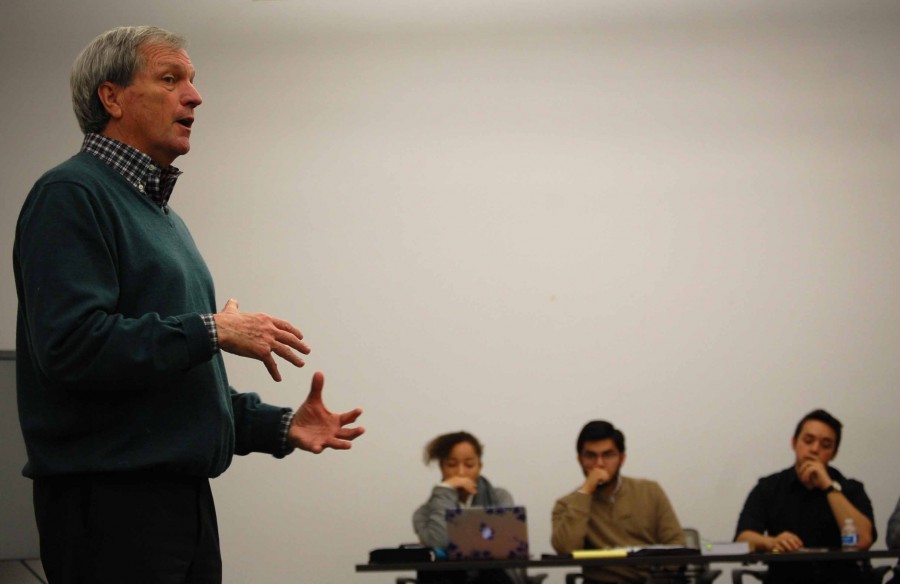 United States Congressman Mark DeSaulnier joined a group of Los Medanos College Honor Students this past Wednesday in L-109. LMC was the final stop on his most recent listening tour after speaking at both Contra Costa College and Diablo Valley College.

“We saved the best for last,” he joked.

After a brief introduction from LMC President Bob Kratochvil, DeSaulnier jumped right into his speech. He started by outlining what he was going to be talking about, saying a lot of the people Desaulnier has talked to have similar concerns — especially in relation to socioeconomic problems and social justice issues including relationships between the community and the police.

“Your generation is much more challenged in a lot of ways,” he said.

His main point however, was to explain the importance of accessible higher education. “We plan to make an argument for community colleges to be more accessible and free for everyone,” he said.

DeSaulnier then opened up the floor for questions and comments. LMC student and LEO club member Richard Stanfield had a lot to say about the interest rates students are charged when trying to pay off their debts.

“I know I have to pay for my loans, but I want to know why I have to pay a higher interest rate than say, a bank. It just seems obscene to me,” said Stanfield. “It’s almost as if the federal government is trying to make college students into a source of revenue.”

Desaulnier responded by saying you can renegotiate your loans and in the meantime “we’ll keep trying” to make sure the cost of paying off loans is easier for college students.

“You have to change the tax system to reward wages and benefits,” said Desaulnier.

Student Colin Brown then asked a question about textbook expenses in which Desaulnier replied with some of the ideas floating around.

“We did pass something finally to make sure community colleges have more leeway” in terms of paying for textbooks. “It’s ridiculous that textbook costs would be higher than other school expenses,” he said.

He noted “every year, the textbooks get updated a little bit” and that one of the possible solutions is to print the updates themselves and give those out instead of making students pay for an entire updated book.

DeSalunier said this wasn’t the first time this issue has come up and that he’s willing to work with his colleagues to correct the issue.

“We’d be happy to engage because it’s come up multiple times at the other campuses,” he said. He added he’d like to “Get together with a few of you to work out the language for a bill. Often times when we work together, it’s really beneficial.”

He suggested LMC students talked to some of the neighboring community colleges like CCC and DVC.

Other panelists took issue with what they perceive as a less than preferable amount of aid in their fields.

“This is a wonderful school. I definitely feel like the professors really care,” said student Sonia Bustos, but she also said that there needs to be more people available in the MESA center.

She said the MESA services are great and there is help available for students but they need more staffing. “The amount of help we’re getting is not enough.”

She also said that she “would like to see more MESA programs throughout the United States.”

DeSaulnier agreed with this, saying that he’s spoken to students involved in similar programs who also happen to be understaffed or underfunded.

“We’ll have to see what the funding possibilities are,” he said. “We have to spend more money on education.”

Bustos also inquired about what could be done to allow more minorities to get internships.

Student Sergio Ramirez also asked a similar question about how to get men of color, ‘specifically brown men from immigrant families’ into college institutions.

Desaulnier responded by saying one way to solve equity issues is ‘by making institutions like this culturally aware … we have to keep working at it.’

Saying that it was a deep-rooted issue, DeSaulnier also said one of the problems with people not getting equal opportunities has to do with the fact a lot of people seem to think that because the economy is better, it’s going to “trickle down to the economically disadvantaged.”

“We can’t just count on the economy to go up, you have to change the tax structure to make things progressive, not regressive,” he explained.

Changing the way that taxes in the United States work was a major part of DeSaulnier’s speech and his point was reiterated when an Economics major asked if he was in favor of raising taxes.

He explained there is “class warfare,” but not how it’s typically known— “We’re all getting rolled by — and I know this is a cliché, but it’s true— the top one percent,” he said.

Desaulnier said Congress needs to show taxpayers know they’re getting value from their tax money in addition to changing the tax code. He noted that he isn’t a socialist— they’d just be reverting back to the higher marginal tax rates Americans saw under the Eisenhower administration.

The conversation then shifted to veteran’s benefits. LMC student and veteran Tito Ramos said that oftentimes, veterans are forced to pick between working and going to school because veteran benefits don’t cover the expenses, especially when you come from an economically disadvantaged household. He said he talked to some of the people who are a part of the process of allotting vets benefits, but that they were confused as well.

“If they’re unsure,” said Ramos, “then who’s teaching them?”

DeSaulnier replied by saying those issues are often brought up at the annual town hall meetings he holds for veterans and that he’s aware that veterans often miss out on benefits made available to them.

He stated that a huge part of fixing this issue is getting accurate information out to vets about opportunities perhaps through a stronger social media presence.   He also said that effective communication is key.

“Communication and human interaction is so important which is why funding these programs are so important,” said DeSaulnier.

He stressed this point further when asked about why there isn’t more funding for LMC’s debate program. He said though it would be a challenge addressing the issues of the students but that it needs to be done.

“I don’t mind being challenged — that’s what this is all about,” said DeSaulnier. “We all come from different perspectives and it’s important to respect them.”

To contact DeSaulnier’s office, email him at [email protected]