Getting to know the law

Aides are 'another set of eyes and ears' 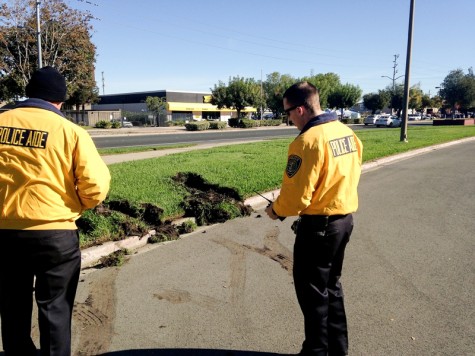 Alexandra RivaMost students at Los Medanos College have probably seen a police aide drive by on their golf cart or walking the halls of the college complex, but few actually know what they do.

“They lock and unlock everything, they do escorts when people ask for them,” said LMC Police Lieutenant Ryan Huddleston. “Basically they’re another set of eyes and ears for the police.”

There are three different shifts that the police aides, who are all students, get assigned. The morning shift starts at seven o’clock in the morning.
“It’s tough getting up that early,” said police aide Deven Neville.

Neville usually works his shifts with his partner, Michael Macias, whom he met at a Police Explorer Program through the Brentwood Police Department several years ago. Both Neville and Macias are criminal justice majors, however this is not a requirement for the job.
“As long as you’re a student, you can apply,” said Huddleston about the application requirements.

Students looking to become police aides must be currently enrolled in at least six units at LMC, and have a minimum 2.0 GPA. Although any student can apply for the position, criminal justice majors are given a unique opportunity to use what they have learned in their classes in real life and prepare for their future careers.

“It’s really good for the experience,” said Macias about his position. Neville and Macias both have other jobs in addition to this one, but their work is similar. The pair does armed security all over the bay area. “I am licensed to be armed and wear everything a California Police Officer wears.”

On the LMC campus, however, police aides do not carry guns and do not regularly get into physical altercations with students and staff. This is not to say that there isn’t a certain level of excitement involved in the daily routine.

“See that car there? We could ticket them for parking like that if they were blocking other cars,” said Neville about a crooked car in parking Lot A.

Writing tickets for cars without parking permits and those illegally parked is a normal part of their day.

“If the machines are out of order we don’t write tickets. That’s not really fair,” said Neville.

Police aides at LMC do not have a set amount of tickets that need to be written during a given shift, but every fine paid and parking permit purchased goes directly back to the school. After Neville and Macias leave the parking lots they often walk around the campus and perform odd jobs that staff members ask them to do.

“We’ll bring people their mail. It’s not in the job description, but we’ll do it,” said Neville.

Neville and Macias are often tasked with putting up and taking down all of the yellow ‘class cancellation’ signs around campus. Talking to students about how their days are going is another role the police aides fulfill.

“We’ll say hello to people. We talk to a lot of the students just to make sure everything is going smooth,” said Neville about his interactions with the students.
Courtesy goes a long way when it comes to bringing a sense of unity between the police aides and student body.