Getting to the ‘core’ on campus 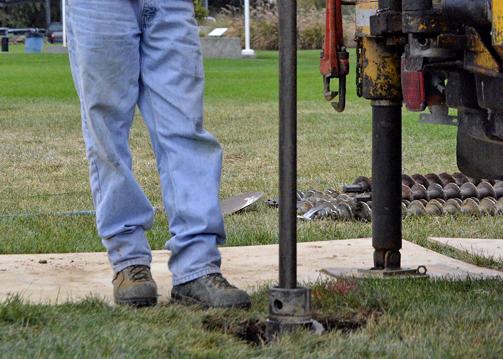 Core sample drilling for the new Student Union Building. 10-27-15. In front of the Math Building. Brant Wilson of RMA group (geotech stuff. Younger guy in green vest) Krazan are the drillers. This hole was dug about 50ft or until they hit the water table. other holes in the are were dug 15-20 feet. "We're investigating the soil." you need to know what's underneath the building.

Progress on the construction of the Student Union and PE Complex buildings was furthered Oct. 27 as core samples of the ground beneath the planned zones were drilled.

The extracted samples taken will be used in order to analyze the make-up of material underneath the areas around the campus desired for positioning of the new student facilities.

“As a part of the project, we need to sample and evaluate the soil in the areas where the new buildings will be located,” said Los Medanos College Vice President Kevin Horan in an email.

Drilling of the cores was the next step after a designing period of the buildings drew to a close.

Knowing what condition the ground is in is important for the planning and construction phases, this according to Brant Wilson, staff engineer for Concord-based geological survey company, RMA Group of Companies.

Soil beneath the tested zones is expected to bear the weight and footprint of the two-story Student Union and the PE Complex, and be resistant to shifting for various reasons, including earthquakes.

The ideal outcome for the analysis is that the soil is stable, and the survey will come back without any problems, he continued.

RMA Group, along with site development engineering firm Krazan, who actually drilled the cores, was on campus Oct. 27 and 28 to do the work.

Most of the holes were dug to a depth somewhere between 15 and 20 feet, said Wilson, although a couple were drilled up to 50 feet for exploration or until the water table was reached.

Groundbreaking for the complexes is expected to take place in 2017. The new construction will help to bring LMC into the modern age.

“It will be a night and day comparison. We will have the best athletic facilities within our district,” said Horan.

– Garrett Belme contributed to this report.