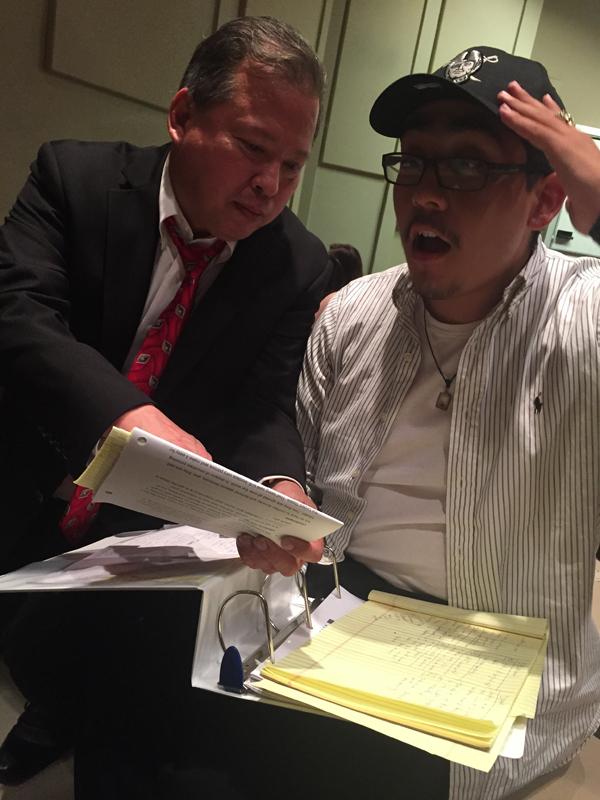 Richard and Genaro prep for one of their 8 debates taking place.

The Los Medanos debate team brought home two awards after competing in the USU National Debate Championship at Claremont McKenna College this past weekend. Team members Grace Babayan and Taylor Gonzalez captured the Community College Champions award, and teammates Genaro Mauricio and Richard Stanfield’s communication netted them the First Year Division Champions award.
Debate coach Marie Arcidiacono expressed her admiration for her team’s efforts. “I’m extremely proud of not just the two teams that placed at the tournament, but of all the teams we traveled down. For many of our competitors this weekend it was the very first time they ever participated in a debate tournament and the energy and excitement they all had toward competing was amazing to witness. We had a long tournament weekend and the fact that on our seven hour drive home the debaters were actively engaged in discussing current events and rehashing the motions from the weekend was awesome. As a coach, I couldn’t have asked for a more productive tournament.”
Half of the duet that earned the Community College Champion award, Grace Babayan, reflected on the moment she and her partner won said award. “Winning the award was so surreal; it almost felt as if I were dreaming. Afterwards, as the reality sunk in, the validation for the hard work my partner Taylor and I had been putting into our practices was so apparent. We didn’t need an award to mark our success, but recognition for our hard work was wonderful to receive,” she said.
Debate rookie Genaro Mauricio had similar feelings upon finding out he and his partner would also be winning an award saying, “Winning the award was a complete surprise to me but my partner Richard and I were ecstatic to have received an award for our first tournament.”
While winning awards at tournaments will no doubt leave a good impression on the debate judges, award-winning debater, Richard Stanfield, explained another way the LMC debate team is leaving judges with smiles on their faces.
“I think it’s really important that we represented LMC really well. We are a junior college among these big prestigious four-year universities and we equated ourselves very well. The judges in fact singled out our college as the most congenial polite professional as far as our appearance and demeanor, and that we were the nicest college that we have ever dealt with,” said Stanfield. “I thought that that showed how we want to represent our college.”