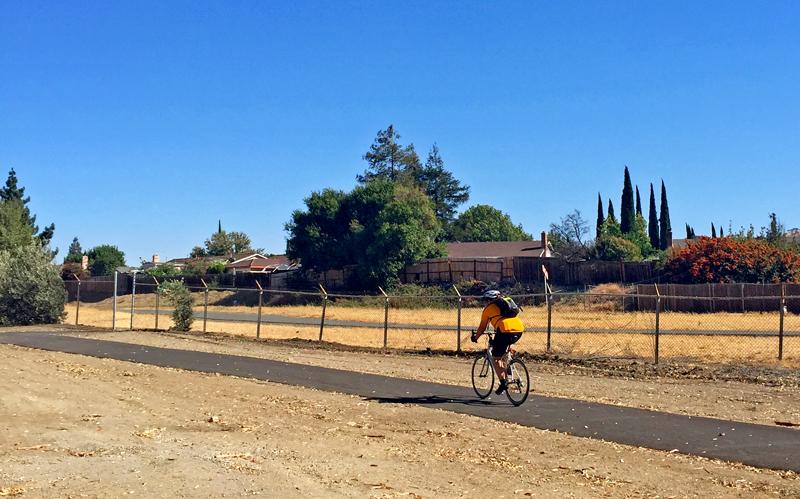 The new south entrance from the Delta De Anza Regional Trail to the Los Medanos College Pittsburg campus is complete and ready for use.

“It is much more welcoming,” said Kenneth Alexander, who is head of the humanities and art departments at LMC and regularly uses the route to bike to work.

The new access point to the campus from the trail was completed over the summer and is about 50 yards east of the original entry point, which Alexander described as just a dirt road leading to a hole in the chain linked fence that runs along the south border of the college.

Now, there is a new opening only about ten feet directly off the De Anza, opposed to the previous hundred foot bumpy access road that ran parallel to the campus that pedestrians used to get from the trail to LMC.

“A need was identified by several people, including a member of our faculty, Curtis Corlew, to provide better walking and bike access from the trail south of the campus,” said LMC President Bob Kratochvil.

And this was a much needed change according to Corlew, who rides his bike to work everyday and said the south route has always been the prime choice for pedestrians to access the campus due to lack of a better option but it was not a very functional one.

During inclement weather, the old, unpaved path became muddy and slick, making it hard to navigate said Corlew in a video he made last year advocating improvements to the trail, which he sent to various local bicyclist groups, along with Kratochvil and LMC Vice President Kevin Horan.

Corlew described the former access point to the campus in the video as “not as convenient, practical or inviting as it could be.”

There is another entrance to the campus, which pedestrians can access at the south west end of the LMC lake, but Corlew said it adds at least five minutes to travel time, has several rigorous hills and various areas on the trail around the lake flood when it rains, making it an impractical alternative.

After Kratochvil and Corlew took a walk along the trail to assess the situation last spring, the task to make the college more accessible to students and visitors traveling the De Anza was given the go ahead.

“There were three quotes requested for the work,” said Kratochvil.  “Two came in in excess of twenty thousand dollars, and one was submitted at around $17,000, which was the bid selected for the work.”

Russ Holt, manager of buildings and grounds at LMC, who coordinated the project, said, although the new entrance is open for use, their work is not quite complete.

He said the installed path is finished on our side of the fence but has “yet to obtain permission from East Bay Municipal Utilities District to finish the path from the fence line to the De Anza Trail.”

“The trail is operated and maintained by the East Bay Regional Parks District but the land belongs to EBMUD,” said Holt, who already has permission to build from the parks district but needs approval from both organizations to pave the last ten feet and connect the entrance to the campus directly to the De Anza.

But although there is still some work to be done, Kratochvil has gotten positive feedback regarding the changes.

“Several of those who have utilized the new pathway have expressed huge appreciation for the new access point, and I am glad the campus responded favorably to such a need,” he said.

Praise for the improved entrance also comes from students, who find it a useful alternate route as well.

Students, like LMC freshman David Kluzek, now have the opportunity to safely and effectively use the trail on a regular basis thanks to the renovations.

“I ride my bike to LMC in the morning, because it is a great form of exercise and it helps me to start my day by clearing my mind,” said Kluzek.

Journalism student April Castro said she uses the trail most days to get to campus because it is convenient.

Corlew is also happy with the improvements and said the new entry point has improved his commute to work but now he would also like to see the trail finished, the addition of proper signage and have it made to look more appealing — like the rest of the beautiful LMC campus.