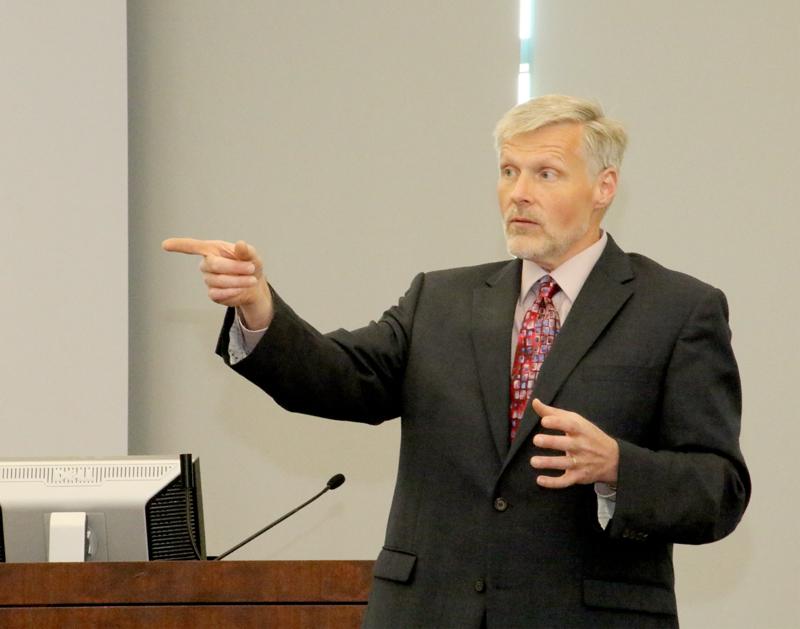 Despite weak enrollment for the third consecutive year, the Contra Costa Community College District’s budget is relatively balanced, according to district representatives during a series of budget forums for faculty and staff April 27.

While enrollment numbers for the current year show a shortfall of almost five percent from what was projected, the district reported just a $242 thousand structural deficit.

Gene Huff, executive vice-chancellor of administrative services for the district, said the deficit was to be expected.

“The budget last year was slightly in the red because we expected ongoing expenses to exceed ongoing revenues by that much,” he said.

Lower enrollment equals less money from the state. For each Full-Time Equivalent Student, the college receives approximately $4,600, which is figured using a state formula based on the total number of students enrolled — which goes toward the operating costs of the district and the colleges within it.

Reasons for the decline in enrollment for the past few years vary. Some of the shortage can be attributed to construction on campus.

Huff said that when Los Medanos College was undergoing construction, and being “gutted,” there was a drop in headcount.

Other issues arose from the lack of funding in the years beforehand as well.

“We had to lay people off and cut classes dramatically because the state wouldn’t fund us as they had prior,” said Huff.

The district is currently utilizing state stability funding again, which it returned to after ending the most recent round of that service in the 2013-14 fiscal year. The funding help allows the colleges to receive money for projected FTES enrollment for the next fiscal year.

The increase in funding would allow the district to have the opportunity to expand after such a period of contraction.

When the district projects FTES enrollment for each college, it is banking on the projection becoming a reality. It stands to reason that a shortfall in enrollment would equal a shortfall in FTES funding from the state, and that is exactly what has been the trend.

In the fiscal year 2012-13 the district was unable to capture funds totaling $900 thousand due to a 200 FTES deficit. The same was true for the 2013-14 fiscal year, when the district had to borrow the FTES numbers from the summer session to make up for the loss in enrollment according to documents presented at the forum (the documents will be made available online with this story).

This fiscal year, the district had, yet again, a stalled enrollment. The lackluster period has resulted in the district losing out on potentially $2.7 million in revenue.

The hope is the district can end the cycle of having to borrow FTES from summer sessions and return to a self-sufficient model.

Raising enrollment is crucial. The college has been working to raise awareness of the classes offered at Los Medanos College and to get more people involved in college directly out of high school, among other things.

One of the trends the district looks at, in terms of estimating FTES, is unemployment. Jonah Nichols, vice-chancellor of finance for the district, said during the forum “employment is a significant enrollment factor.”

He clarified that as the unemployment rate rises, so does the enrollment in the district colleges.

Through efforts in funding innovative ideas from campus community members and marketing — such as with the district wide, and college specific commercials filmed earlier this spring — the district hopes to raise enrollment to adequate levels in order to release itself from the need for stability funding.

During the budget forum Laurie Huffman, who is a language instructor at LMC, asked whether the college is working to attract the 16 thousand students left stranded by the collapse of Heald College and its parent company Corinthian Colleges, Inc. — the largest collapse in history for U.S. higher education.

“We are sending reps to Heald … as part of a transfer program for their students,” said Huff. He added that while he was unsure whether they were going to attempt to get any students from Corinthian’s other colleges, including WyoTech, he said “we will be certain to work with them on those students too.”

LMC Vice President Kevin Horan said changes on campus are in effect to help counter the stagnant enrollment and boost the number of FTES at the college.

“We have strategically expanded our course offerings at the Brentwood Center,” said Horan. “We have expanded the number of courses being offered in English and math that enable students to accelerate through the remedial level course to college level courses.”

The budget will go to revision later this month, with the hopes of being adopted June 30 of this year.