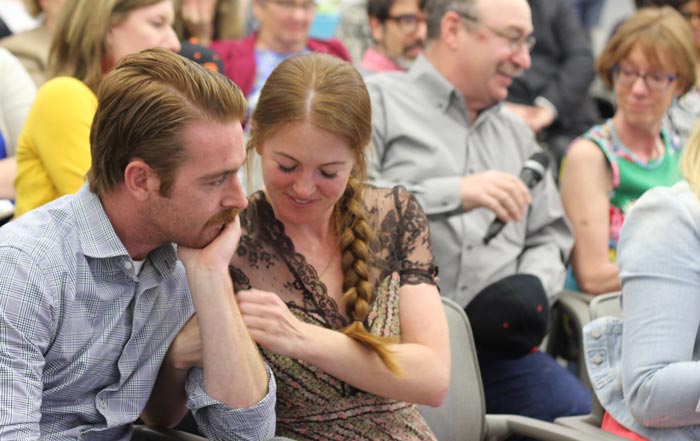 The lights were dimmed and a somber song from Fleetwood Mac played as guests embraced and were seated for the April 10 memorial of English Department Chair Karen Nakaji. A photo slideshow of Nakaji and her loved ones was displayed at the front of the room while guests arrived to celebrate the life of a beloved friend and colleague.

Karen died March 7, three months after being diagnosed with pancreatic cancer. The loss was unexpected and a great loss for many as she had been a part of Los Medanos College for over 30 years as a student, tutor, professor and the first director of the Center for Academic Support. She accomplished a lot in her career, including creating a new degree for English majors, and inspiring countless people along the way.

“Karen loved Los Medanos,” said her sister Jodee White. “More importantly, she loved the people who are Los Medanos. From her students to co-workers, many became family and enriched her life in so many ways. I’m sure we all know of lives she touched, careers she launched and people she supported with her friendship and attentive care. Her mark at LMC will live on for many years, I am sure.”

The memorial was open to everyone from noon to 1:30 p.m. and all the seats in the Library Community Room were filled with standing room only.

LMC President Bob Kratochvil opened the celebration with a quote from Buddha: “Thousands of candles can be lighted from a single candle, and the light of that candle cannot be shortened. Happiness never decreases by being shared.”

He compared the light in this quote to that of Nakaji, before passing the microphone to master of ceremonies and former LMC President Peter Garcia.

“We’re going to celebrate, but if we’re not sad, we probably can’t have the celebration she deserves,” Garcia said through tears.

But then he lightened the mood by speaking of Karen’s character while at work.       “She knew how to not let you know how stupid you really were,” said Garcia, who recounted that she would often laugh, smile and wait until you left to fix whatever work you’d presented her with. Judging by the laughter in the room, Garcia was not the only one to meet this type of response.

Hobbs spoke on Karen as an educator and colleague. She recalled the time when they were both part-timers and interviewing for the same job at LMC. They’d become close and were sad that only one of them could get the job, until a new position opened up and they were both hired. They were best friends ever since.

Of their many collaborations, Hobbs said, “the magic was working together and creating wonderful lessons and projects and supporting each other along the way.”

When one of them was not entirely prepared for class, the other would readily provide handouts and any other material needed that day. They spent a lot of time working together on curriculum and lesson plans to keep classes interesting for their students. And, of course, they supported each other endlessly.

Hobbs quoted Karen, who would say, “to paraphrase [her husband] Dave Nakaji, you are never as bad as you think you are. But remember, you’re never as good either.”

Next to speak was long-time friend Chris Smith. She and Karen met as LMC students because both of their daughters attended the preschool on campus. Despite Karen pursuing a career in English and Smith following a medical path, their companionship was unwavering.

Smith said their 30 years of friendship were spent “supporting each other through multiple college degrees, a couple of husbands, a few divorces, some boyfriends, four kids with chicken pox, girl scout troops, teenagers, single parenting, 18 house moves, and many, many diets.”

The laughs continued as Smith recalled asking Karen to accompany her to Maui, where she was scheduled to teach a pediatric course at a conference. Karen offered to help her teach as long as Smith taught her all that she knew ahead of time. At the conference, Smith said, Karen performed as a master and impressed everyone with her knowledge. They never found out she was not a medical practitioner.

She opened with a short Emily Dickenson poem about a dying woman who has yet to tell her garden, then continued “to understand Karen, poems are not enough. You need prose. You need story. You need thesis.”

Austin then read a piece she wrote entitled “Becoming Karen.” In it she said Karen was about “the things that mattered” – in her case her children, her students and her colleagues.

Austin said, while the majority of the English department tends to shy away from one another, they all came together in the nature preserve on the Monday after Karen died “and for one brief moment we loved each other, because we all loved Karen.”

“We honor her by becoming what we loved in her,” said Austin in closing.

Nancy Ybarra, Dean of Liberal Arts, personal friend of Karen’s and main coordinator of the memorial, chose to speak about Karen’s emotional and spiritual maturity.

She remembered how Karen would often deliver messages to people based on dreams she’d had of them. Many times she’d be right – including when Ybarra applied for the dean position.

As many people in the room agreed, Karen was always there as a confidante.

“One of our last conversations was about eternity … she said that although it might seem like she was going to depart from this world far sooner than I, that in fact it was really just a heartbeat on the scale of eternal time.”

Ybarra ended her speech with mention of the quote on the back of the program, one that she said captures the essence of Karen’s message: “We’re all just walking each other home.”

After speeches from Karen’s closest friends, the microphone circled the room for anybody who wanted to speak. And many did, including English instructors Wendy Alexander, Laura Burnell and James Noel, recording arts instructor Frank Dorritie and several of Karen’s former students.

ESL instructor Yongmin Zhu stood at the front of the room and sang a heartfelt rendition of “Always On My Mind” by Willie Nelson, springing tears all throughout the room.

Although not necessarily expected to speak, Karen’s sister Jodee said a few words and Karen’s daughter Kayla thanked everyone for coming, saying “we love you, mom.”

But most surprising to hear was the final speaker, Karen’s husband Dave Nakaji. He admitted that he wasn’t planning on speaking, but decided to share a poem that he wrote about the things that brought his wife joy.

The final lines in the poem depicting Karen read, “carefully pruning, lovingly attending to the roses, knowing each by name; adding color, delight, and amazement to all that she touches.”

After a grand applause guests were encouraged to share memories and enjoy tea and cookies – Karen’s favorite treat.

One of Karen’s favorite places was the nature preserve and the English department would like to place a plaque there in her honor. If you would like to donate to this cause, you can do so through the Los Medanos College Foundation.