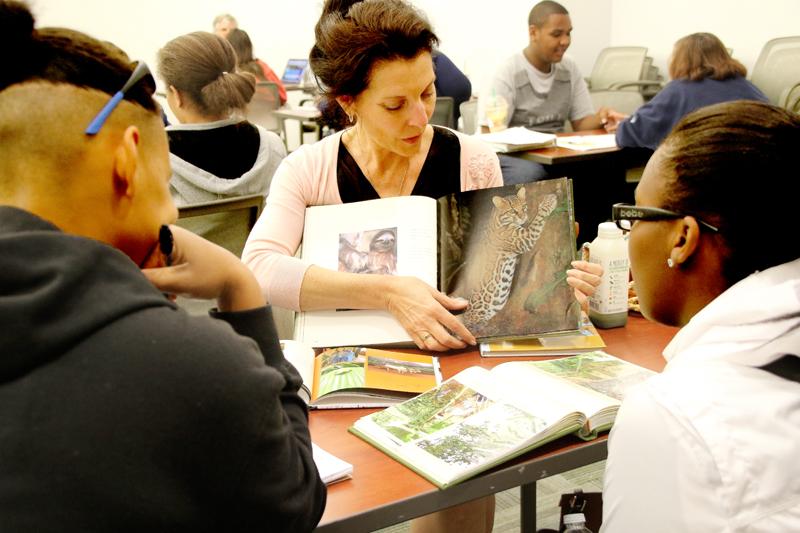 Students, staff and members of the community gathered in L109 to take part in the library’s Books Alive Event April 14. 17 people signed up to be “books” and tell students about their experiences.

There were a few students that checked out books at the beginning. About 20 minutes into the event, crowds of people started coming in to see what the event was about. Eventually, it got to a point where students had to wait around for books to become available because the room was filled.

There were a total of 17 books that students could check out. Roughly 45-50 people checked out books. There were a wide variety of book subjects that included travel, aquatics, college experiences etc.

On such person was author and former Peace Corps. Volunteer Dorothy Crews Herzberg. She talked about the time she spent teaching kids in Nigeria. She noted that even though the weather was “difficult to get used to” given the humidity and extreme heat and it was easy to get sick, she wouldn’t mind going back. She mentioned her desire to go to Thailand but said she was too old to actively participate in the Peace Corps.

“I learned more than I expected,” Jacqueline Abad Santos said. “They have a wide variety of books.”

One of the most popular books was Holly Hingtgen. She told her story of what it is like to be a travelling nurse. Many students who expressed an interest in nursing, crowded around her to listen to what she had to say. This seemed

Hingten started out as a Pharmacy Technician and then became a unit secretary. She went on to become a Licensed Vocational Nurse to an Associates Degree Nurse to a Bachelor of Science Nurse.

“I could really connect to them. Their stories were really fun,” said student Irene Orellana said.

“People can be very different, but still the same,” Smith said.

Some students stayed to check out more books after they were done with one. Students mostly sat one on one with the books, but some listened in groups.

“It was really cool,” Jessica Navarro said. “I always wanted to travel, so it was nice to hear someone who traveled to so many countries.”

The next Books Alive event will be in the fall and it will include people sharing what their careers are like. For more information about the fall Books Alive, visit the LMC library.