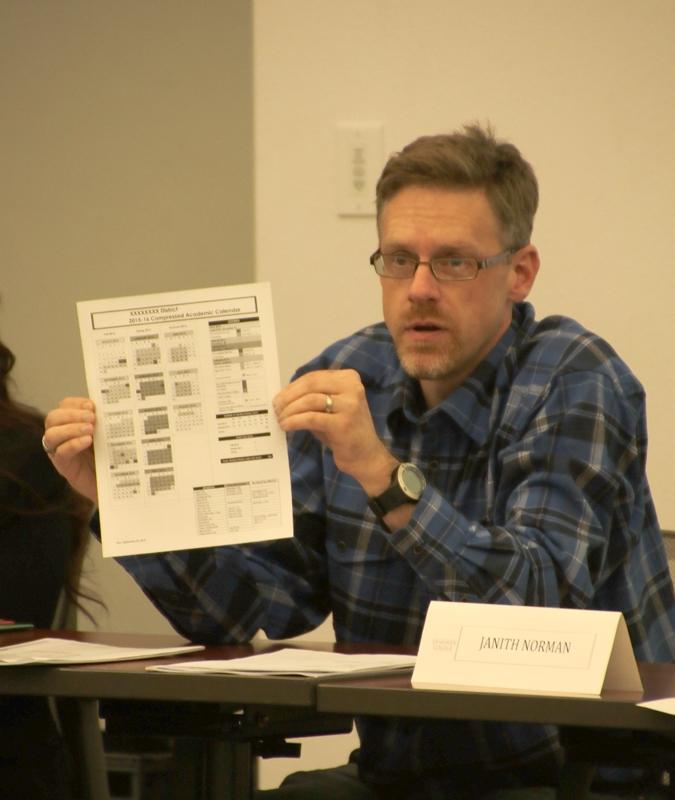 Erich Holtmann, Academic Senate secretary, discussed the change in calendars from 2005 to now during the Feb. 23 meeting.

Most Los Medanos College staff, faculty and students have grown comfortable with the traditional 18-week semester, but that could soon change. The Contra Costa Community College District is considering switching to a compressed academic calendar similar to what some other community colleges in California have adopted.

Changing the academic calendar would decrease the length of the semester at Los Medanos, Diablo Valley and Contra Costa colleges from 18 to 16 weeks. To do this the colleges would have to increase class time to make up for the loss of two weeks of instruction.

The shortened calendar is comparable to that of the California State University (CSU) and University of California’s (UC) systems making it an easier transition for transfer students.

The increase in class time also means there would be fewer class periods. Instructors would also have to change their course structure and syllabi to fit the new timetable.

However, a shortened semester would allow for a longer summer session and a possible winter intersession, which could benefit students looking to take more units during the school year.

At its Feb. 9 meeting, the Academic Senate discussed some of the issues raised by the potential change, and staff and faculty expressed concerns about the compressed calendar.

We can only adopt the change if all three colleges in our district consent to it and agree to negotiate the details, said Academic Senate President Silvester Henderson.

Meanwhile the district wants the colleges to consider this conversion because statistics show student success improves in a 16-week calendar. While many community colleges in California have adopted this system, information provided by the district suggests most Bay Area schools have not made the change, which could provide an advantage in attracting students.

According to information provided by the district, most districts converting to a compressed calendar experienced Full Time Equivalent Student growth rates, 3.89 percent more than the state average. The district receives approximately 1 million dollars from the state for a one percent increase in FTES. By increasing the course offerings in a winter or summer intersession, the district could increase its FTES up to five percent.

The potential monetary increase from the rise in FTES would go into a general fund that the college uses for various activities and programs, said LMC Bob Kratochvil.

“The goal is for the [faculty senate] at each college to determine their recommendation in regards to the compressed calendar by May 1 and keep the UF apprised of their progress during the semester,” said DVC professor Donna Wapner.

Switching to a compressed calendar must be negotiated through the selective bargaining process with district management and the United Faculty Union.

Talks of switching to a compressed calendar system first began during the fall 2005 semester by the Compressed Calendar Task force. Their job as a task force, as appointed by District Chancellor Helen Benjamin, was “to conduct a feasibility study looking at the possibility of instituting a compressed calendar at CCCCD … Using the information from the report, CCCCD will determine whether or not to move forward on an entire package of the compressed calendar.”

The talks, however, fell through after all three colleges in the district failed to come to an agreement to adopt the calendar, said Kratochvil.

Before any decision is made on this switch, representatives from colleges that have made the change to a compressed academic calendar will be invited to share their transition experiences with faculty at future LMC, DVC and CCC senate meetings.

If a decision is made to reduce the calendar to 16 weeks, the soonest it could be implemented is Fall 2016.