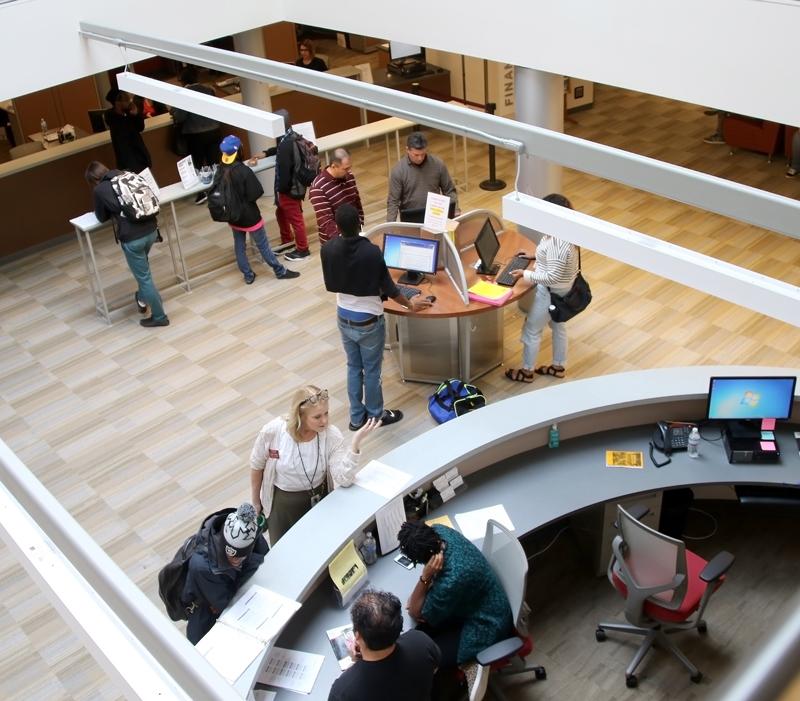 A view from the second floor as students use the new Student Services Center facilities.

“The environment has a good flow to it,” said Tiffanie Foster, “I feel fancy.”

Foster, who works the front desk at Admissions and Records, shares a common opinion of the newly opened Student Services building that opened its doors to students and faculty just in time for the start of the spring semester.

Costing $16.7 million, the 38,100 square foot building is the latest addition to the campus in an ongoing goal to better facilitate a growing enrollment rate as well as providing more convenient support for students.

“It’s better for the students,” Foster added, describing the benefit of having everything a student needs all in one location. “It’s more professional,” she said.

Departments like Financial Aid, DSPS and Counseling, which previously were spread around campus, are now located in the same building to provide what LMC President Bob Kratochvil described as a “one-stop shop” for both new and returning students.

“It’s really beautifully designed,” said Kratochvil, adding how the final unveiling of the building was “quite an emotional experience” for those involved in the process.

Having moved from various locations across campus, including a “portable” on the far side of the Science building, the LMC President is also happy to be situated in a permanent location on the fourth floor of the new building.

“It’s like coming home to where the president’s office is supposed to be,” said Kratochvil, describing his enjoyment while watching all the smiling faces that enter through the doors into the center.

“It’s amazing,” said Financial Aid Supervisor Jennifer Ma, comparing her department’s new location to its previous building just outside the cafeteria. With “an opportunity for growth,” Ma and her colleagues are “very excited” to be located in the new Student Services Center.

Although many departments have changed their locations to this newer building, confusion as to where they may be now, as well as many other questions, can be answered by those either in the new Welcome and Information centers located in the center and main entrance of the second floor.

“I feel like everything is open,” said Leonardo Bojorquez, who works as a student ambassador at the Information Center along with fellow ambassador Danielle Brown. Helping to assist both returning and new students, both say they help between fifty and one hundred students daily, even if it is “easier to find everything,” according to Brown.

With useful departments now in a central location, the newly opened Student Services Center is the final result of years of hard work designed to help benefit both present and future students at LMC.