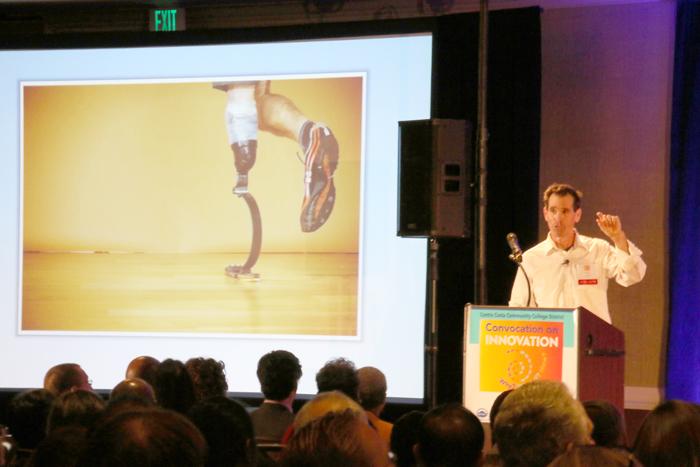 Keynote speaker Van Phillips presents to the crowd on the innovation evident in the prosthetics industry.

The Contra Costa Community College District held the first Convocation on Innovation Friday, Jan. 9 at the Hilton hotel in Concord. The conference was held to give instructors new ideas on how to better educate their students.

The keynote speaker was Flex-Foot prosthetics inventor Van Phillips. Throughout the duration of his speech, he showed clips from Good Will Hunting and Dead Poet’s Society as examples of how to engage your students. He said students are like horses because they need to roam free. He then showed a clip of a video of Louisville physics teacher who had come up with new ways to get his students involved in their learning experience. Phillips spoke about technological advancements and joked that when he was in school, students thought “the library was god, there were not laptops.”

The final speaker was Kaiser Permanente’s Senior Vice President, National Diversity Strategy and Policy and Chief Diversity Officer, Dr. Ronald Copeland. His ideas for better education focused on togetherness. He spoke on the importance of diversity and culture saying “it’s the driving force at every institution.” Copeland says the best way of earning opportunities “is through inclusion.”

After each presentation, Dr. Helen Benjamin presented prizes to attendees who entered a raffle. Prizes included Amazon gift cards, iPad minis and Kindle Fires. Benjamin ended the event by thanking everyone who spoke. Free lunches were given afterward to those who attended. LMC President Bob Kratochvil said this will be reoccurring event held every two years.