Brentwood Center back on track 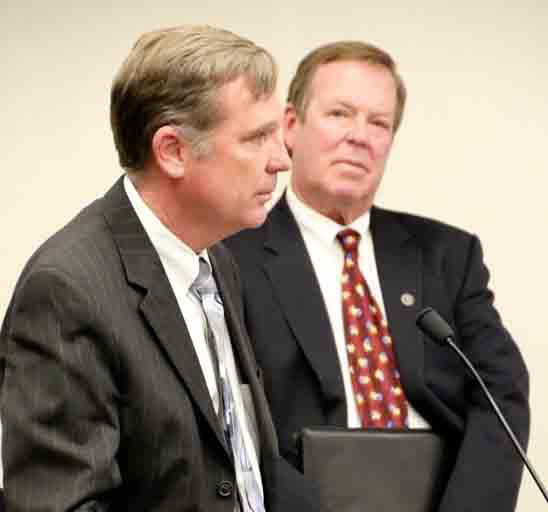 The Contra Costa Community College District is moving ahead again with plans for the future Los Medanos College Brentwood Center campus.
A halt had been put on the project in September following an 11th-hour proposal from BART Board of Directors President Joel Keller to move from the current site chosen by the district, located at Marsh Creek Road and Vineyards Parkway in Brentwood, to an alternative location next to a possible future eBART station, near the Mokulomne Trail and Lone Tree Way.
But after a feasibility study was completed on the issue, the governing board voted 4-1 at its Nov. 12 meeting to move forward with the original property chosen by the district at Pioneer Square and the project has now picked up where it left off.
“We [will] resume the process we started prior,” said LMC Vice President of Instruction and Student Services Kevin Horan, who will be in charge of the new campus when it opens.
CCCCD Chief Facilities Planner Ray Pyle said that after the request for qualifications for architectural design services was sent out this summer — which followed the approval of Bond Measure E by voters in June, giving the district funds to build the new permanent campus — 19 firms submitted their statements for qualifications and now they will finally reviewed by the screening committee, which is scheduled to meet Dec. 4.
“They have to review and score the architectural team submissions that we received back on Aug. 19, and then come to the meeting to discuss strengths and weaknesses for each firm,” explained Pyle. “Following that, we will shortlist a few firms and have meetings with each to determine which firm appears to be most qualified for this particular project.”
LMC President Bob Kratochvil said the district-level committee will make a decision based on which company is the best fit for the campus and suggest those firms to a committee at LMC comprised of district and campus representatives, who will select the best candidate to recommend to the governing board.
Timothy Leong, the district’s director of communications and community relations, said any project over $10,000 will need to go before the board and “ultimately they have the final approval” on who will design the new Brentwood Center.
Even though the selection of the design team is scheduled for February, the project is nowhere near being close to finished.
The designing process could take a year or more — possibly 18 months — and a new center typically takes one to two years to construct, Kratochvil said, but noted that although the project will take a while to complete the process is starting to go forward.
“At least we have direction now and can start moving on it,” he said, adding “We were pleased there was action taken.”
Horan echoed Kratochvil’s approval and said the board was deliberate in investigating Keller’s proposal and the community’s concerns about traffic and safety.
“The board made the right decision and demonstrated that to the public,” he said.
The new campus is now slated to open sometime in late 2108 or early 2019.