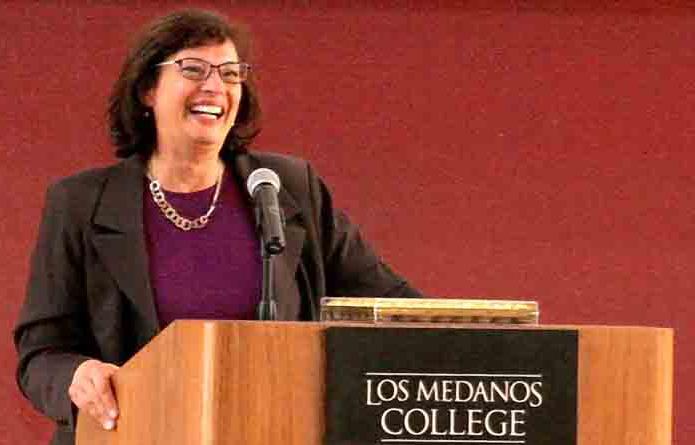 Sonia Nazario’s journey began with a simple conversation. She was chatting with her housekeeper Carmen, who had one young child, about when she was going to add to the family.
Carmen hesitated, but reluctantly admitted she had four other children she left behind in Guatemala, and had not seen them in 12 years.
It was Maria del Carmen Ferrez’s story that sent Nazario on a journey to Central America where she would interview many other immigrants with similar tales.
The Pulitzer Prize winning author of “Enrique’s Journey” spoke about that journey in front of more than 200 students, teachers and staff from Los Medanos College, and Pittsburg and Ygnacio Valley high schools in the LMC Gymnasium on Wednesday Nov. 5.
The event was funded by the Title V Hispanic-Services Institutions Grant and was organized by Puente event coordinators Stacey Miller and Liz Abril.
Los Medanos College President Bob Kratochvil welcomed the audience to LMC and introduced Puente students Alex Vega and Blanca Machata, who presented Nazario.
Nazario’s own story began when her parents moved from Argentina to the United States for a better life. But when she was 13 and her father died, her mother wanted to move Nazario and her sister back to their native country.
They moved to Argentina in the midst of the so-called “dirty war.” Her family lived in constant fear of the military who roamed the streets and kidnapped people. Journalists were killed for telling the truth about what was happening in Argentina. It was then that Nazario decided that she wanted to be a journalist and a truth teller.
“I’ve always thought of myself as a very determined person. It was part of my DNA. It is part of who I am,” explained Nazario.
She was a good student in high school, but felt overwhelmed and underprepared at Williams College, the top liberal arts college in the United States.
“You could count on two hands the number of books I had ever cracked open,” said Nazario.
However, while she struggled, Nazario was determined to work twice as hard as her college classmates. Those efforts paid off — she graduated with honors and was invited to give the convocation speech at Williams College.
At the age of 21, she went on to become the youngest person to be hired at the Wall Street Journal.
In 2002, she published the six part series Enrique’s Journey in the “Los Angeles Times” and in 2003 the series won the Pulitzer Prize for Feature Writing. Series photographer Don Bartletti also won the Pulitzer Prize for Feature Photography the same year. In 2006 Nazario rewrote the series, expanding it into a book entitled “Enrique’s Journey.”
Enrique was on his eighth attempt to get through Mexico when he met Nazario. She spent weeks with him on his journey and then attempted to travel the same 1,600 miles from Tegucigalpa, Honduras Enrique had traveled for three months, step-by-step on foot and also while on top of a moving freight train.
“I had only gone through one percent of what they had gone through,” said Nazario.
Gangsters control the tops of the trains. Ten to 20 of them go from car to car threatening people and taking their money, she said.
Those gangsters beat Enrique for money and after they found he was penniless, they beat him harder. They even threatened to throw him off the train but before they could do more damage, Enrique flung himself off the train, landing bloody and beaten on the side of the road. A passerby gave him a few coins and told to go home but he was determined to get to his mother.
Besides the danger of gangsters, weather conditions are poor. In the south it would be too hot to touch the train and in the north it was so cold riders could freeze to death. The freight trains often shakes and rocks violently side to side and Nazario nearly fell off the car.
“I didn’t hear the warning and suddenly this big branch smacked me right in the face,” said Nazario.
In Veracruz, Mexico the train moved slowly, and people from small towns brought bundles of food and water for those making the journey. If they had nothing to give they would pray for the travelers.
One of the people Nazario met passing through Veracruz explained it to her this way: “If I have one tortilla I will give half away. I know that god will give me more.”
Despite the struggles Nazario encountered and documented on her own journey, she is hopeful change is possible even as the United States struggles with the issue of immigration.
“I know that if we all bring this commitment and passion and determination to this issue we could change conditions in these foreign countries slowly but surely,” said Nazario.
She is awaiting the day that the United States fixes these problems so children don’t have to make this long journey.
“We can ensure that these refugee children get the measure of the justice that they really deserve in this country,” said Nazario.
Nazario then gave members of the audience the chance to ask her questions about her book and gave updates on the struggles Enrique and his family still face today.
At the end of the discussion, Nazario talked about the reasoning behind putting herself through the trouble to relive Enrique’s journey.
“As a journalist, there is a value to putting [yourself] in the middle of that misery and writing the story the most powerful way I can, hopefully to make you want to read that story and maybe move you enough so you may want to do something about the problem,” she concluded.
After the discussion she gave people the opportunity to have copies of the book signed. You can find Nazario’s book “Enrique’s Journey” at your local bookstore or online for $9. For more information on Nazario and Enrique’s journey visit enriquesjourney.com