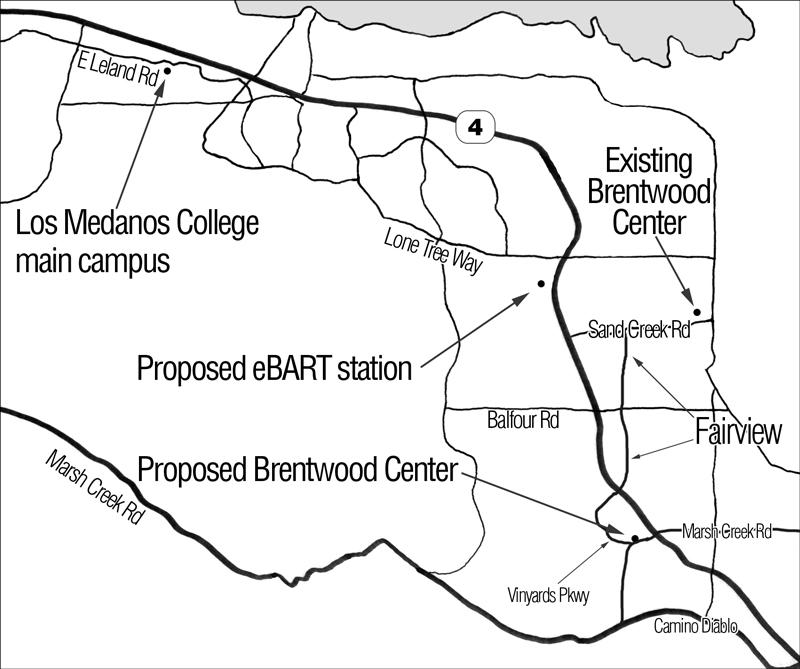 Fairview Avenue is the main area of resident concern over current and future traffic.

In a unanimous vote Oct. 28, the Brentwood City Council authorized sending two letters  — one to the BART Board of Directors and the other to the Contra Costa Community College District Governing Board — regarding the future site of the new Los Medanos College Brentwood Center campus.
Written by Brentwood Mayor Bob Taylor, the letters came as a response to objections aired at the Oct. 14 city council meeting by BART Board of Directors President Joel Keller and members of the Trilogy and Summerset communities about building the new college campus on land currently owned by the college district at Marsh Creek Road and Vineyards Parkway.
The mayor wanted to make clear to all those involved with, and affected by, the project that the city council, which had previously sent out a letter Feb. 12, 2013 supporting the Vineyards site and moving forward with construction at that location, is taking their 11th hour concerns seriously, but is not taking sides.
“I felt that it was kind of imperative that we let the citizens of Brentwood know that we are concerned,” said Taylor about the intent of the letters, adding that the council “wished to work with both sides of the fence.”
In his letter to the governing board, Taylor did not endorse keeping the future site of the Brentwood Center on land located at Trilogy Vineyards at Marsh Creek Road, nor did he express support for moving to the alternative location — at Highway 4 and Lone Tree near a possible future eBART station — which was suggested by Keller to the governing board at its Sept. 10 meeting.
But he did inform the governing board in the letter that “Brentwood residents appeared before the city council [Oct. 14] to express dissatisfaction with the Vineyards location, citing concerns about possible negative impacts attributed to traffic, public access, circulation, and public safety” and expressed their desire to have the campus moved to “a more central location in the city.”
Summerset Vista Homeowner’s Association Board of Director’s President George Schmidt spoke out at the city council’s Oct. 14 meeting regarding these issues.
He said 8,500 cars currently travel along Fairview Ave. every day and “it only takes one of those to hit one of our residents,” adding the number of accidents and injuries will grow with the number of cars.
Diablo Valley College President Garcia, who coordinated the Brentwood Center project as former LMC dean of economic development, said in an email that interview, no complaints were brought forward during the planning process.
“The developer and existing residents saw the value of a community college on the Vineyards site and understood that our value would extend to their property,” said Garcia.
Along with the comments from the Summerset and Trilogy residents, the mayor also acknowledged in his letter that the council was aware of the feasibility study the district is currently conducting on the alternative location and urged the governing board to keep the city informed during the process.
“Any plans to include a community college should be considered in the context of continued cooperative planning between the district and the city,” said Taylor in the letter.
Council Member Gene Clare said at the Oct. 28 meeting he is pleased with the college district for taking recent concerns and suggestions seriously by “doing a study and considering all the facts prior to moving forward.”
“I wanted to commend the community college staff and board for listening to the public and doing their due diligence,” said Clare.
Keller had insisted at the Oct. 14 meeting, that even though it is late in the game, the city council take action and rescind its support of the current site at Marsh Creek Road and Vineyards Parkway, previously expressed in the 2013 letter from the city council to the District February 12, 2013.
”In addition to what the residents have been asking this evening, I would ask you to consider sending an additional letter to the college district requesting that they find a more appropriate site,” said Keller.
But in the city’s letter addressed to Keller and the BART Board, the mayor described the partnership between the city and the governing board:
“For the past several years the city has enthusiastically supported the Contra Costa Community College District’s plans for a future, expanded Brentwood LMC campus.”
The mayor also recognized the objections voiced by Keller and Brentwood residents, but he made clear the city does not have final say on where the college is ultimately located.
“I reminded the residents that all decisions relating to the future of the Brentwood campus lie exclusively within the authority of the College District Governing Board, and not the city,” said the Mayor in the letter but again avoiding support for either side.
Instead, because BART has identified the area near the Mokulumne Trail and Highway 4 as a possible future site for an eBART station, the city recommended the BART Board move forward with its plans.
“The city urges the BART Board to, in the near future, approve a strategy to either acquire land or establish a capital improvement project for this future station,” said the mayor in the letter.
Council Member Steve Barr echoed the Mayor Taylor’s remarks at the Oct. 28 meeting regarding a future eBART station because he doesn’t want the city to make plans around a future BART station if it never comes to Brentwood.
“I surely would like to see a commitment from BART,” said Barr.
If you would like to watch the videos of the city council’s Oct. 14 and 28 meetings go to http://www.brentwoodca.gov/gov/council/granicus.asp. A copy of the letters to the BART Board and the District Governing Board can be found at http://brentwood.granicus.com/GeneratedAgendaViewer.php?view_id=38&clip_id=1917.
The results of the feasibility study will be discussed at the District Governing Board meeting Nov. 12 at 4 p.m., located at 500 Court St. in Martinez.