Brentwood site up in the air 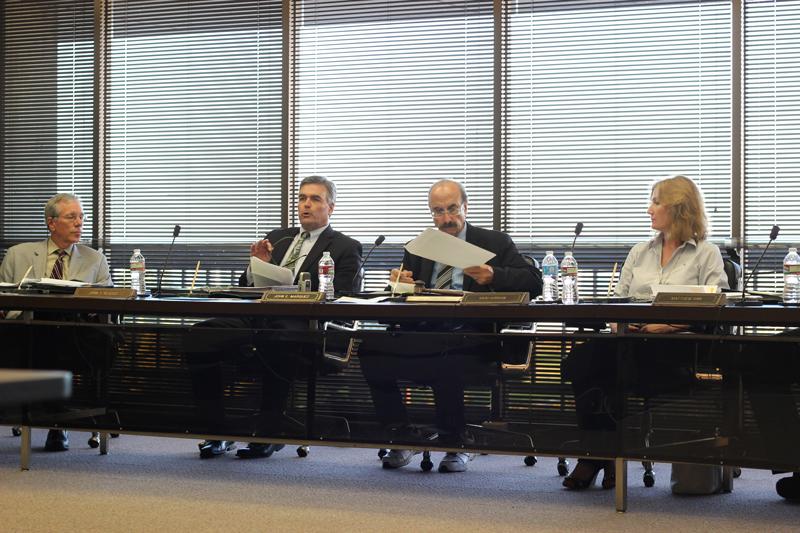 The Contra Costa Community College District Governing Board decided at its Oct. 8 meeting to move ahead with a feasibility study regarding the BART board president’s proposal to move the planned Los Medanos College Brentwood Center building from property owned by the district near Trilogy at the Vineyards on Marsh Creek Road to a parcel next to a possible future eBART station near the Mokelumne Trail.
Before the decision was made, the district board was presented with information gathered by board members Greg Enholm and John Nejedly, who were appointed to an ad hoc committee by President John Marquez during last month’s district board meeting. They investigated the feasibility of a site move this late in the planning stages, and opened the floor to public comment on the issue.
Nejedly informed the board that the ad hoc committee had met with members of the district staff and a real estate consultant Sept. 23 to discuss BART Board President Joel Keller’s proposal to move the location closer to public transportation.
It was agreed that an “unbiased and objective” feasibility study should be done on the possible site suggested by Keller, said Nejedly.
“We directed staff to find an independent consultant for the work,” he said, and after a conference call Sept. 30 with District Chancellor Helen Benjamin, Real Estate Consultant Howard Sword, who is familiar with the project, was hired to conduct a feasibility study and is expected to report his findings at the Nov. 12 district board meeting.
Enholm voiced his concerns with having a real estate consultant create the criteria for a study regarding a college campus site and suggested the board meet to discuss what specific aspects Sword should consider in his investigation.
The district board decided to move ahead with the feasibility study despite Enholm’s objections, but Enholm said Thursday morning that after the district board meeting he and Nejedly agreed to meet Monday to possibly come to an agreement on the specific criteria to be considered by Sword in his feasibility study.
After the ad hoc committee’s findings were presented Keller insisted during public comment that the board has a moral obligation, if not a legal one, to conduct a study regarding how a move from its current site to the Vineyards property would impact students — 30 percent of whom are hispanic, 6 percent African American, and 6 percent Asian — who already attend the Brentwood Center.
He reminded the district board that at their Sept. 10 meeting a representative from TriDelta, which currently provides transportation services to the current Brentwood Center site, said the company would not be able to serve the center if it moved to the parcel near Trilogy.
Therefore the district board, by moving the site 3.6 miles away from where it is now on Sand Creek Road, would be “changing the prospects of the most vulnerable students in Eastern Contra Costa county of their ability to obtain an education,” said Keller.
Relocation of the Brentwood Center to the Marsh Creek Road location might be in violation of Title VI of the civil rights act, said Keller.
Title VI of the civil rights act  “prohibits discrimination on the basis of race, color, and national origin in programs and activities receiving federal financial assistance.”
Keller’s 11th hour proposal, which Enholm has supported, came just as the construction process was about to begin.
Currently, LMC is receiving about $1.1 million annually from the state because the Brentwood Center has become “a state-approved education center,”said District Chief Facilities Planner Ray Pyle, who added that 19 architectural firms have already submitted statements of qualifications in the hopes of being eligible to provide architectural design services for the project.
“Owning land and having a plan for a new building was an essential element in obtaining that approval from the the California Community College Chancellor’s Office,” explained Pyle, who recently discovered that a site relocation would require the district to submit a change request to the CCCCO Board of Governors requiring it to show the move would not change the “student-related planning elements of the application package” originally submitted.
Having its education center status revoked is a small possibility for the Brentwood Center if there are any revisions to the student-related planning elements, Pyle said.
“I’m not sure that has ever happened,” he said clarifying the money the district receives from Measure E will not be affected by a site move because it was approved by voters and allocated by the CCCCD Governing Board.