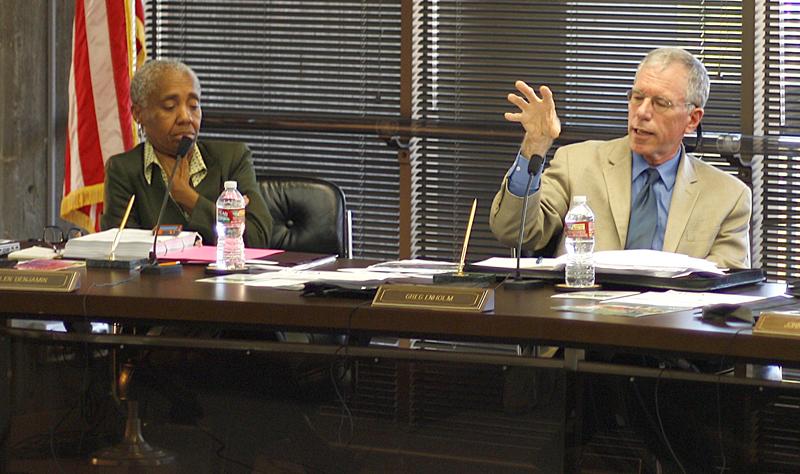 The Contra Costa Community College District Governing Board created a special committee during its Sept. 10 meeting to conduct a feasibility study that will help decide whether or not to swap the planned site of the new Los Medanos College Brentwood Center for a new location next to a possible future eBART station near the Mokelumne Trail.
District Governing Board Vice President John Nejedly, who represents Ward 4, and Trustee Greg Enholm, who represents Ward 5, were appointed to the committee following concerns and questions that arose after BART representatives presented the governing board with an 11th hour proposal.
BART Board President Joel Keller, and Ellen Smith from the BART planning department, pitched their idea of switching locations to the district governing board.
Enholm, as well as members of the public who spoke during the meeting, emphasized the importance of the college joining with public transportation to benefit economically disadvantaged students who cannot afford to drive.
“The reality that hasn’t been mentioned is that the students at the current Brentwood Center, almost all of them, go to the Pittsburg Campus for courses,” said Enholm, adding that travel to the Pittsburg campus from Brentwood can be difficult during certain parts of the day. Connecting both campuses with public transportation should, he said, ease the difficulties faced by students who have to drive from one location to the other.
He also wanted the district governing board to be aware that the current site will possibly cause an influx of traffic that the roads and communities in that area may not be prepared for.
Last year a BART study indicated the Mokelumne Trail as a site of interest for a future station that would increase ridership by 14,000 passengers between the Pittsburg/Baypoint station and the proposed extension by 2035.
“It’s kind of a sweet spot at the Mokelumne Trail in Brentwood where your ridership peaks and after that your ridership drops, while your cost continues to increase,” said Smith adding that all BART would need to move ahead with its plan is the land to build toward the proposed Mokelumne station, money for planning and construction, and city support.
But even if approved, and the land needed is acquired, BART would not begin construction on a new station right away.
“The opportunity is there could be an eBART station in the long term,” said Smith adding that, in the interim, a Tri-Delta facility is a possibility that LMC would benefit from if it were nearby.
When questioned by District Governing Board President John Marquez about when planning would be put into action, Smith didn’t have an answer and said the time frame for the project is still “undetermined.”
But Keller added, “it is possible that Contra Costa Transportation Authority will go out for a bond measure or half cent sales tax in November ‘16,” and the proposed transit center could be included.
BART’s strategy in the past for moving eastward from Concord has been to secure property years in advance of its ability to build a project, said Keller.
Both the Pittsburg/Baypoint station and the Hillcrest station, which is currently under construction, were originally Park-n-Rides before being brought into fruition.
”This model is consistent and has been successful,” said Keller. “The goal would be to purchase 10 acres of land within the Mokelumne Trail to use as land bank for a future rail extension.”
He cautioned that if land is not purchased far enough in advance, there may not be an opportunity to procure a site in the future once it has been developed, even if the funds are available to build, because it would be too expensive to purchase retail, residential and commercial property and then tear it down to construct an eBART station.
But having the land for the intended new Brentwood Center already owned by the district was a main requirement for receiving bond money for its construction, explained District Chief Facilities Planner Ray Pyle. The land purchased by the district is located several miles from the proposed Mokelumne Trail site at the junction of Marsh Creek Road and the Highway 4 Bypass.
“The Brentwood Center has already been approved and is already receiving its annual appropriation,” said Pyle.
Vicki Gordon, secretary of the district governing board and trustee for Ward 2, expressed concern that switching sites might affect the college district’s ability to continue receiving the money allotted to them by Bond Measure E.
“I don’t know that I can answer that question,” replied Pyle, adding that before a switch is made, it would be something they need to learn more about.
Brentwood Mayor Bob Taylor said this project has been eight years in the making and this issue should have been discussed years earlier. The new Brentwood Center has already been put on the map, requests for architectural designs have been sent out and light service and utilities are in place.
“It is very nebulous,” said Nejedly, who also expressed concern about the proposal.
He said that an official proposal from the BART Board, with approvals and a timeline, would be given more serious consideration, “but this public proposal by an individual in the 11th hour after we secured funding, were about to begin construction, is frankly inappropriate.”
If you want to voice your opinion on the location of the new Brentwood Center, please attend the next governing board meeting Oct. 8 at the district office, 500 Court St., Martinez, or contact the governing board trustee who represents your ward. You can find this information on the CCCCD website, 4cd.edu.