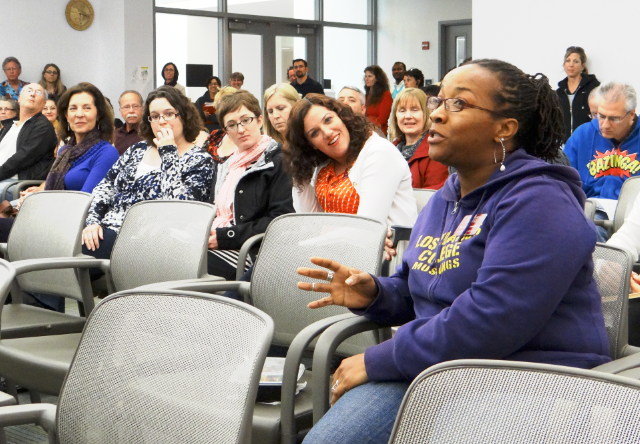 Los Medanos College library conference room played host to the second in a series of presentations regarding a new management structure. The new structure to be implemented in July has already undergone some changes since the first presentation on March 1 as LMC President Bob Kratochvil and his team incorporated suggestions from attendees who were not completely sold on the first incarnation during the latest presentation held on Monday, April 1.

During the latest presentation Kratochvil said the new structure is meant to foster creativity and create a more efficient organization.

One of the more significant changes to the management are in the responsibilities of the various deans with the duties of several current deans being reassigned or redefined in the new structure along with the creation of three new dean positions.

Kiran Kamath who currently serves as interim senior dean of instruction and career technical education has been taped by the president to serve as senior dean of planning and effectiveness. Kratochvil said in an interview following the presentation he believed Kamath was ideal for the position thanks to her background as a professor and past experiences as a dean.

The new position will free her of some duties, but she will continue to act as the college’s accreditation liaison officer or ALO. In addition to this Kratochvil said Kamath will help to spearhead efforts to help LMC plan on how it should look as an institution of learning in the next five and ten years.

Krotchvil’s senses the new position will play to her strengths.

“I am delighted and honored to serve in the role of Senior Dean of Planning and Institutional Effectiveness for LMC. Part of the new assignment will be to continue to serve as LMC’s Accreditation Liaison Officer, which I took on in spring 2012 while I was still of Dean of Career and Technical Education,” said Kamath. “The other part of the new assignment will be planning. I am a planner by nature.”

Although excited by the new position Kamath shared some mixed emotions.

“Just like I missed my students when I became a dean, I will miss my colleagues in the departments that I have had the pleasure to work closely with as a dean. While I will be wearing a different hat, I know I will continue to work with all the same wonderful people in the college and look forward to it,” said Kamath.

Senior Dean of Student Services Gail Newman was selected by Kratochvil to address one of the needs found during the last accreditation review, which was to offer the same quality of student services at the Brentwood Center as what was found at the main campus in Pittsburg. He said Vice President of Instruction and Student Services Kevin Horan did his best to make it out there, but Newman having dedicated time at the center will provide a higher quality of administrative oversight.

“I think it is going to be a great opportunity to build on awareness of the services we have at the Brentwood center and to expand on them,” said Newman.

Guerro said his role will be to make sure the college is in compliance with the student success act, senate bill 1456, before the college is under state mandate to be. One key facet of the legislation he identified is the requirement of every student having to have an education plan on file.

“I think overall [the new structure] will help the college to be more focused on things that hinder student success and at the same time help to increase student engagement,” said Guerro.

EOP&S Director Jeffrey Benford will take on some of the current duties of Guerro. Benford’s new title will be dean of counseling and support services. Kratochvil explained this move made sense because of Benford already having counseling experience, which is one component of the new dean of student development position being phased out.

Kratochvil explained he was able to make these changes due to the education code because the people being shifted were already in management positions, but for other dean positions there will have to be a hiring process for the dean of liberal arts, dean of math and science and dean of career technical education or CTE.

The three new dean positions is one of the bigger shifts as it places a CTE discipline under each of the new deans such as communication under who will be the dean of liberal arts instead of under the dean of CTE.

The move came about in part because of feedback from the first presentation.

One buzz word for the assembly was “dialogue” as Kratochvil sought to ferret out impressions of the faculty and staff gathered about the new structure. At some points his effort was met with silence perhaps due in part to some visual portions of the presentation being overwhelmed by the sheer amount of information trying to be conveyed.

Student Life Coordinator Demetria Lawrence shared her concern that program needs may not have sufficiently been taken into account when the plan was created during the assembly.

“We [student life] have been growing steadily over the last several years and to move to this new structure like this will have major repercussions on that work,” said Lawrence during a later interview.

Spanish Professor Laurie Huffman came away from the presentation with a sense it could be a step in the right direction for the college.

“Under the initial plan the deans had too much on their plate. The new plan is more equitable and manageable,” said Huffman. “It is a positive change.”

“I think it is too early to know what my concerns are. I think it will relieve the workload on the deans. If they have a lighter workload it will allow them to be better advocates for students and their programs.”

Kratochvil said the new positions will be open to current faculty and staff as long as they meet the requirements and that they will also recruit for the positions.

He ended that portion of his presentation with a call for more dialogue about the presentation as the faculty and staff have a chance to reflect on it.

Kratochvil also implemented a plan to have the presentation made available for further consideration, so there may still be more revisions before it is put into place.