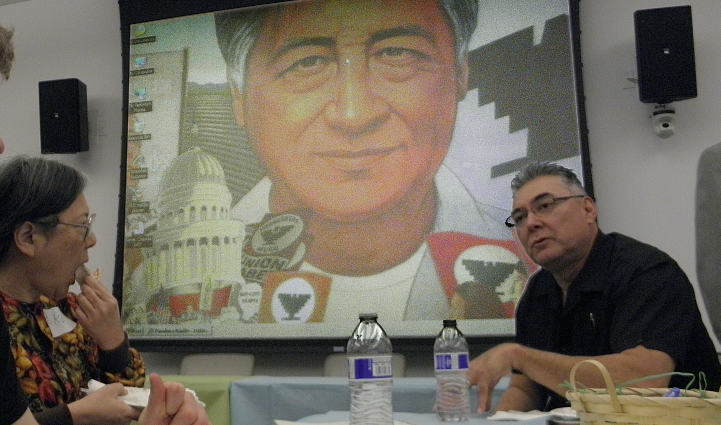 The spirit of serving the community was felt throughout Los Medanos College this week in remembrance of Cesar E. Chavez, who took a stand for migrant farm workers rights in California and across the nation.

The week-long event kicked off on Monday, March 25 with a civic leaders and student luncheon and continued with presentations about Chavez’s life and work.

“This is the first time that LMC has dedicated a week-long event to Cesar Chavez,” said Student Life Coordinator Ashley Adams.

Chavez was born in Yuma, Arizona in 1927 and moved to California during the great depression after his family lost their farm. Chavez attended 30 elementary schools and achieved only an eighth grade education. Chavez’s lack of formal education didn’t stop him from joining the Community Service Organization, a latino civil rights group in 1952 where he organized voter registration and started campaigns against racial discrimination.

In the 1960’s Chavez started his own organization, the National Farm Workers Association, which later became the United Farm Workers of America.

Chavez’s efforts eventually lead to the 1975 California Agriculture Labor Relations Act, an act that remains the only law in the nation that protects farm workers rights to unionize.

It was Chavez’s leadership abilities and drive to serve the community that makes teaching his legacy to the students of LMC so important to Carla Rosas, who worked with Adams in making Cesar Chavez Week a possibility on campus.

“It further strengthens for me how important it is for a college community that we do this kind of work.” said Rosas.“It is important that we show our students the work of these leaders.”

At many of the weeks presentations, Adams added that she and some students were moved to tears, which in turn humbled herself to be apart of bringing Chavez to LMC.

“I’ve been so humbled,” said Adams. “Because this is a historical event at LMC. The people I have been working with have been awesome. It’s very easy to take this seriously.”

During this week, the La Raza and Puente programs, both in which gears toward academic greatness and community service within the LMC latino community, have raised $192 to go towards the LMC Cesar Chavez Scholarship which will be soon be established.

“Cesar Chavez is a wonderful inspiration,” said Kidwell enthusiastically. “His influence is not just limited to farm workers, but to all who strive to make a their communities a better place.”

Cesar Chavez week will conclude on March 29th with the annual “Celebrating the Life of Cesar Chavez” awards celebration in the LMC Recital Hall from 6 to 8 p.m.

The event will honor the life of Chavez, and honor recpients in the East Bay for outstanding service in their communities.

Other recepients are UC Berkley graduate Adriana Gomez, who will be awarded The Chavez Spirit Award for making an impact in advocacy and social justice.

For more information about Cesar Chavaz, contact Ashley Adams at [email protected] or you can stop by the Student Life Office located near parking lot A.