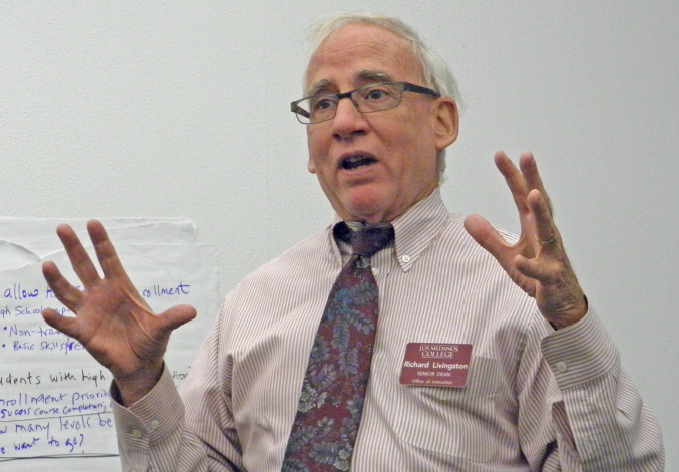 Los Medanos College was founded on the ideal of lifelong learning and one of its exemplars Senior Dean of Instruction Richard Livingston is moving on to the next phase of his life by retiring at the end of May.

Livingston is one of the founding faculty members of the college and he has grown along with it over the course of his 39 year long career. He shifted from being a professor to becoming a dean then filling the role of interim president of LMC for two years. Finally, Livingston answered Contra Costa Community’s Chancellor Helen Benjamin’s call to become the senior dean of instruction for the district.

His long association with the college has earned him the respect of those who have worked with him if LMC’s Interim Dean of Instruction Kiran Kamath’s thoughts on his retirement are any indication.

“Richard Livingston is one of the original faculty of the college who came to LMC when the doors first opened. He will be missed by the college,” said Kamath. “His history and knowledge of LMC goes back to the beginning. Given his love of the college, he will probably continue to visit and support LMC.”

Just as Kamath stepped into his role as dean of instruction at LMC, he looks for Livingston to still be part of the college, so does, Cindy McGrath, his successor as the journalism adviser to the college’s newspaper the Experience.

“Richard … has been a nearly constant presence for 39 years. So many consider him the heart and soul of the LMC, not to mention its unofficial historian, said McGrath. “When he leaves there will be a void, I hope he decides to come back and teach as so many retiring LMC family members have done over the years.”

Reflecting on his own career Livingston looks back to the start for his crowning sense of accomplishment.

“I think at heart I am still a teacher and I am most proud if establishing the journalism program…Cindy done a marvelous job of taking it to the next level,” said Livingston.

McGrath attributes her successes in part to the first production night where Livingston modeled how to be a journalism adviser in1988.

“Richard sat with me the first newspaper production night of my career and modeled how to do the job. I paid attention to the big things, and the little things, too,” said McGrath. “My students love that I feed them, but that was all Richard. That first production night he had his wife Sherry drop off pizzas for the staff. I have been providing the student newspaper staff with pizza on production night ever since.”

His willingness to pour so many years of his life into LMC comes from his belief in the transformative ability of the junior college system.

“I was a mediocre high school student – community college changed my life,” said Livingston. “It opened many doors for me and I wanted to do that for other students.”

Although many students may not be aware of how his work has benefited them one LMC alumni Morgan Livingston, his daughter, has grown up during his tenure with the college.

“I respect my dad more than anyone else in the world because of his utmost dedication to his profession. He has made so many sacrifices for LMC because he truly believes in the community college’s mantra that anyone and everyone deserves an education,” said Morgan Livinston. “My father has done a wonderful job of making this a reality at LMC. He has continually fought for student’s needs – inside and outside the classroom. In his administrative meetings, he is a bulldog, ready to fight for the students.”

The fact she is his daughter also allows her to shine light on an aspect of Richard Livingston’s character.

“He may seem rough on the outside, he is a softy on the inside,” said Morgan Livingston. “He truly cares for the students.”

Richard Livingston’s desire to close the book on his career as a founding member of LMC comes in part from the pressure of father time.

“Old age, I am not being entirely facetious this is my 39th year and I am 67 years old,” said Livingston. “I think I have contributed what I can and it’s to move on to the next thing.”

The guiding principle of his career goes back to why he became part of LMC and remained with it and the district for so long.

“To help students achieve their goals. I think did that as a faculty member and as an academic manager,” said Livingston.

Although he is looking forward to retirement Livingston does not set his eyes towards the future without mixed feelings.

“I will miss the people. I have had so many wonderful colleagues at LMC,” said Livingston. “I hope my legacy is that I have improved the college and students will benefit from that.”

Time may be the only judge of that, but Political Science Professor David Zimny summation of Livingston’s career puts full confidence in Livingston having accomplished just that with his years of effort.

“He is the kind of college administrator that I would aspire to be, if I were ever unlucky enough to be an administrator.,”said Zimny. “Being a college dean is a thankless, grueling job. Deans must walk a tightrope, balancing the demands of ungrateful faculty with the directives of demanding college presidents and boards of trustees. They are denied the deep satisfactions of classroom teaching, but their duties and responsibilities are absolutely essential to the smooth running of the educational machinery.”

“I have known, worked with, blessed and cursed many deans in my 40 years as a college teacher, but I have never met one who did the job better, more passionately or more effectively than Richard Livingston,” Zimny continued. “ LMC has been blessed by his skill and dedication ever since the College was founded, and he will be an example and an inspiration to all of us as long as the College exists.”