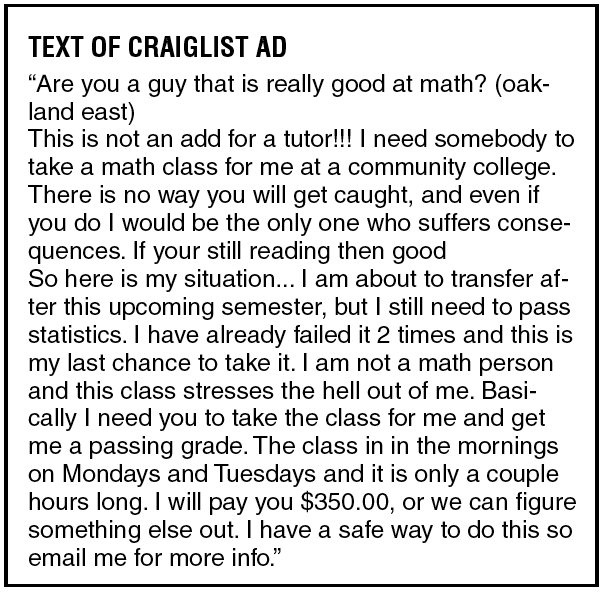 Having someone do your homework for payment has been around for sometime and at least one anonymous student from the Bay Area tried to take it one step further by posting an ad on Craigslist for someone to personally take the class for him. The post was flagged for removal, but not before Math Department Chair Julie VonBergen, received it in an email.

“A math professor friend from another college emailed me the Craigslist ad from the student trying to get someone to take a statistics class in their name,” said VonBergen in an email. “I shared the information with LMC math faculty.”

Here is an excerpt from the Craigslist ad:

“Are you a guy that is really good at math? (oakland east)

This is not an add for a tutor!!! I need somebody to take a math class for me at a community college… (see full text of the ad in the accompanying graphic)

Academic Senate President Michael Norris, who also teaches math, placed this issue of academic fraud on the senate agenda for the Jan. 28 meeting but it was tabled until the Feb. 11 meeting because they ran out of time to consider it.

“I am bringing this topic to the Academic Senate at our next meeting, just to see if they have any suggestions. Anybody can put anything out on the Internet, including Craigslist, so the posting could be a joke for all we know. But maybe we need to look into the issue,” said Norris via email.

“I was initially surprised. You hear rumors about this kind of thing in online distance education classes, but not in a face-to-face class. I don’t think I have ever had a student try to have someone else take one of my classes for them. But then I never check,” said Norris.

At LMC students are able to attempt a class three times before having to go out of district to attempt that class again. Students may feel the pressure of academia that leads them to cheat or to cut corners to get a good grade.

“Students cannot just keep repeating classes over and over again and there are perhaps going to be limits in the future as to how many units a student may take at the regular tuition cost, so there may be more motivation to have impostors in the classrooms,” said Norris.

The Craigslist ad was circulated throughout the math department, grabbing the attention of the faculty and raising the question as to whether students can be identified when taking classes. At some higher educational institutions this practice has already been implemented.

The math lab already requires students to provide ID when taking mastery quizzes but if this proves to be a problem at LMC more restrictions may be put in place.

Math Professor Mara Landers said, “As a human being, my first reaction was this is an inappropriate thing to do. I also wondered how often it happens.”

Landers admits that she did not look at her students differently after receiving the email but added “There has been some discussion about, could we ID students.”

The Experience contacted websites that offer such a service.

WriteMyPapers.org — a United Kingdom based company — offers their service to do just that. The website’s calculator indicated a 20-page thesis paper (5,550 words) at a PH.D. level will run $460.

A man, who identified himself only as Ross, explained that students give him a subject and a down payment. Once payment is received a proficient writer from an English-speaking country will start working on it. After a draft is completed and the student signs off, the document is sent electronically. All orders and transactions are done online. Ross refused to comment on the ethical and legal aspects of the business.

Wetakeyourclass.com will take the entire online class for you. This is not a tutoring website. A man who identified himself as Mike said, “I only do it for you,” and wouldn’t say much else before facetiously commenting, “We hire people part-time who work at McDonalds… We make them change their uniforms so they don’t get grease all over the key boards…We pay our writers with chicken nuggets.”

Four other websites were contacted, No Need to Study responded and left a message, but the other three sites Allhomework.net, Boostmygrades.com and Mymathgenius.com did not return the calls. The author of the Craigslist ad was unreachable for comment as no contact information could be found since the posting had already been removed.