Career ended due to illness 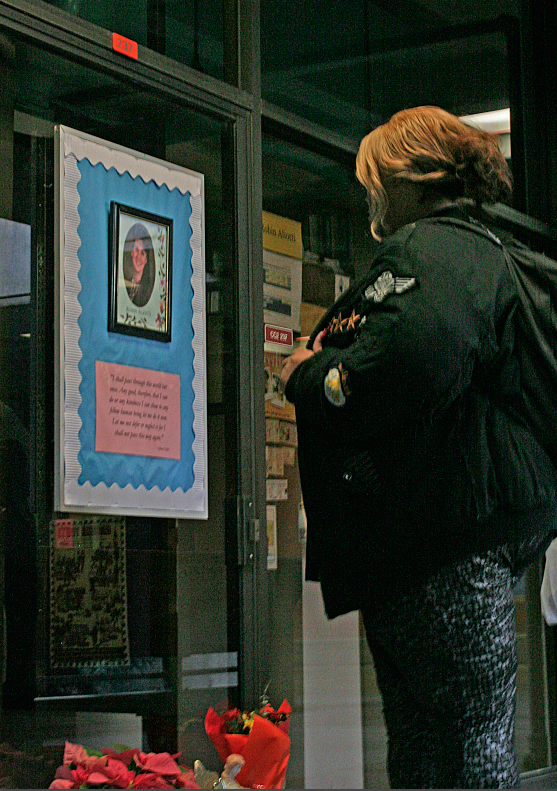 The stark gray corridors of the Los Medanos College Complex’s second level have been brightened by bursts of color from flowers placed to honor the life of Robin Aliotti who died on Nov. 14. A picture placed outside her former office shows a peaceful smile, giving a glimpse at her inner light that those who knew her could clearly see.

Robin is survived by husband Peter, daughters Ashley and Sarah and an LMC community, which colleague and Biology Professor Mark Lewis said, “will miss her terribly.”

Robin had faced a long battle with cancer that she fought in a manner Lewis found inspiring.

“She was relentlessly positive even as she faced that terrible illness for years and years. She would be undergoing treatments and still come to the school and have nothing but good things to say,” said Lewis.

Robin’s association with LMC began in the spring of 1983 according to a letter sent to LMC president Bob Kratochvil, who referred to her as a bright and energetic student. She went on to earn a master’s degree from California State University Hayward, now known as CSU East Bay.

In the fall of 1998 she was hired as a member of the LMC Faculty and began a new chapter in her professional career  teaching economics, accounting and business. Beyond these accolades, Kratochvil’s letter illustrated her efforts to better the college’s community by serving in the Academic Senate, participating in the Shared Governance Council and also working as a department chair.

During a portion of the eulogy given to honor Robin’s life, LMC Chemistry Professor Mitch Schweickert referred to the service she gave as the glue that helped to hold the college together.

“Robin’s colleagues at the college admired and loved her. We respected her devotion to her job and to her students. And her devotion to the substance of the college – in her most energetic years, Robin probably belonged to more committees than anyone else,” said Schweickert.

“I would sometimes see her in the hallways, literally running from a meeting in one room to the next meeting in another room, usually carrying that big jar of candy that she passed around at the meetings.”

Robin’s dedication and service won her the admiration of LMC’s Business Department Student Tutor’s Cesare Jacinto, who as a member of the United States Marine Corps knows about both of those character traits.

“I had the privilege of being one of Professor Aliotti’s students. In fact, she was my first teacher when I first returned to school during the Fall 2010 semester. The one thing that I will always remember about Professor Aliotti is that she brought out the best in me,” said Jacinto. “She was a wonderful person who truly cared about each and every student she came across. My thoughts go out to her family and friends.”

Lewis said one of Robin’s contributions to the college was helping to develop and institute the personal finances course at LMC. It is a part of her legacy to the college, which LMC student Nick Campbell incorporated into his life after his class with her ended.

“I think what made Robin’s class so special was her attention to detail and her ability to find ways that students can remember the material. The one thing I learned from her class in particular, was how to hone in on my budget a lot better,” said Campbell.

“In her personal finance class we learned about budgets and we were shown how to drill down to certain categories of our spending and track it. I still use that method to this day.”

To Lewis, Robin’s greatest talent was her ability to bring out the best not only in her students, but in her colleagues as well.

For her fellow Business Department Professor, Theodora Adkins, it was Robin’s bright personality that caused their relationship to transcend a professional nature.

“Robin Aliotti was much more than a colleague. Over the past 15 years we have become like a family so it feels as if we have lost a sister. Robin was smart, efficient and professional along with being a kind, caring and loving human being. She was an excellent teacher/mentor and her absence will be felt for many years to come,” said Adkins.

The college’s Interim Dean of Instruction Kiran Kamath joined with Kratochvil in heralding Robin as one of LMC’s best and brightest success stories.

“She loved the college as a student and came back as faculty. She could relate so well to students because she was one. Her passion for teaching and dedication to students made her loved by students and colleagues and she will be deeply missed,” said Kamath. Her husband Peter will create a scholarship for LMC students in Robin Aliotti’s name.