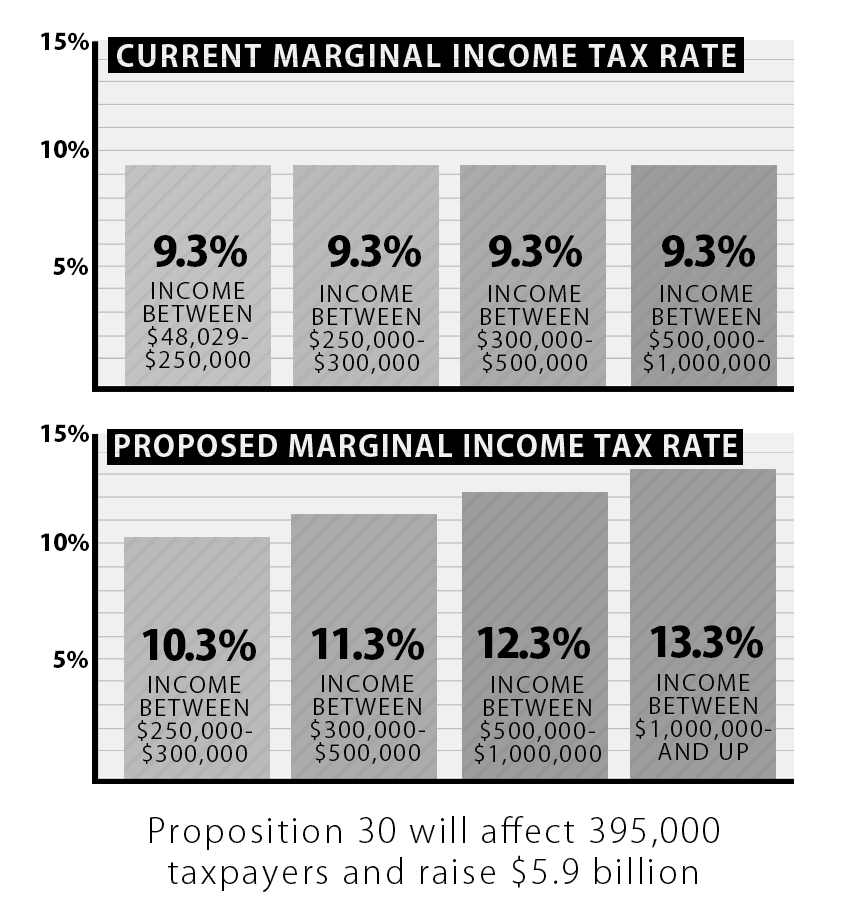 The budget axe is loom- ing over the heads of K-12 and community colleges across California, its target the last bit of flesh on the backbone of the educational system. Education has been cut closer and closer to the bone over the last three years, thus resulting in a 17 percent enrollment decline. In real numbers 485,000 students have been denied access to higher education and a possible fourth and devastating swing is on the horizon if prop 30 does not pass. A projected 180,000 students will be denied access in the Spring 2013 semester.

“I believe that the prop- osition will protect public schools and community colleges, like LMC, from additional cuts,” said se- nior Dean of Educational Programs and Services Richard Livingston “The tax measure is a good short-term solution to protect education which has been cut significantly during recent years.”

Prop 30, once known as the millionaire’s tax, raises state sales tax by a quarter percent of one penny for the next four years and alsoproposesatemporary income tax increase on high-income earners. As it stands right now, those earning over $48,029 and above pay 9.3 percent in

income tax. The initiative proposes an additional one to three percent on the top three brackets, star ting at $250,000 dollars and raising it to 13.3 percent for those who make more than million dollars. This would last for seven years and would generate an estimated $6 billion dollars annually.

“It’s very important, I think, for colleges to understand what’s ahead of us on the November ballet this year,” said Vice Chancellor of California Community CollegesDan Troy, head of fiscal policy, in a teleconference on Sept. 24. “These dollars would, in effect, help prop up the education budget for the state… so for education as a whole it assumes that $5.9 billion dollars are contingent on the passage of prop 30.”

The 2012-2013 budget was passed with the assumption that prop 30 will be successful, but we all know what happens when we assume, and in this case, should the proposition fail come the morning after the election, plan “B” will be mid-year budget cuts tallying just over $9 million for Contra Costa Community Colleges alone and $338 million around the state.

Troy added how the money from prop 30, if passed, will be divided. “That’s $250 million each for UC and CSU that’s about $5.4 billion for k-12 education so for community colleges prop 30 holds a lot of significance to us in our budget.”

“Budget cuts have had a profound impact on the colleges and as a result on students and that’s the reality we live in.” said Skinner. “The message for today in a nutshell is simply that despite the best efforts [of colleges doing what they can to cope] there is really nothing colleges can do to overcome the magnitude of resource reductions they face.”

Skinner presented stats from a statewide survey that gave insight into what colleges have been doing to deal with the bleak economy. He stated from 2008-09 to 2011-12 there has been a 24% reduction to the college system resulting in 70 percent of colleges of fering fewer class sections, employing fewer people and making it difficult for students to get the classes they need. The average college has a waitlist of 7,252 students as a direct result of under-funding.

The California Federation of Teachers is among the supporters of the temporary tax hike and sees prop 30 as a way to help the education system restore previous cuts by asking the rich to help out a little more.

“We have…a cumulative shor t fall for schools of 20 billion dollars over the past 4 or 5 years and proposition 30 will ask the wealthiest Californians, people who can best afford it to…pay a slightly higher tax rate,” said communications director Fred Glass. “California Federation of Teachers supports proposition 30 because the state of California has a severe revenue problem due to the recession and to inadequate tax rates on the wealthiest Californians.”

Where there are supporters of a cause there are inevitably those opposing, and they are saying just the opposite—that the real problem is within the way the state is managed.

“We feel that the government needs to cut spending rather than raise taxes; there is just so much spending out there and it’s just unjustified and unnecessar y and it doesn’t make sense to raise taxes when we’re in a very difficult economy,” said Bob Blymyer of the Sacramento Taxpayers Association.

Among supporters of prop 30 is the League of Women Voters who advocate for government funded services and see a new direction of money management by the state.

“Schools are just one of the many ser vices that we think government needs to perform…and the funding just simply isn’t there,” said Helen Hutchison. “We [the state] are doing more honest accounting now and so we like that. We like the honesty about where the money [goes] and where it’s coming from. We think that there needs to be more funding. We think we should pay for the ser vices and get the services.”

Kris Voseburg, executive director of Howard Javis Tax-payers Association, feels that taxpayers are already taxed enough and that the passage of prop 30 will hurt the already weak economy.

income tax rates and it (prop 30) raises both of those and is very likely to damage the economy which is already struggling,” said Voseburg.

The fate of education is in the hands of the voters regardless if this initiative is seen as a way for fat cats in Sacramento to keep up frivolous spending or a Band-Aid to keep afloat a sinking ship and give time to figure out the best way to salvage it. The reality is that education is in dire need of financial help. The government officials that we trust to run our government and make decisions on our behalf put the choice back in the hands of the voters. However you may viewthissituation,makesure your voice is represented on Nov. 6 by casting your vote.