A semester's worth of music in review 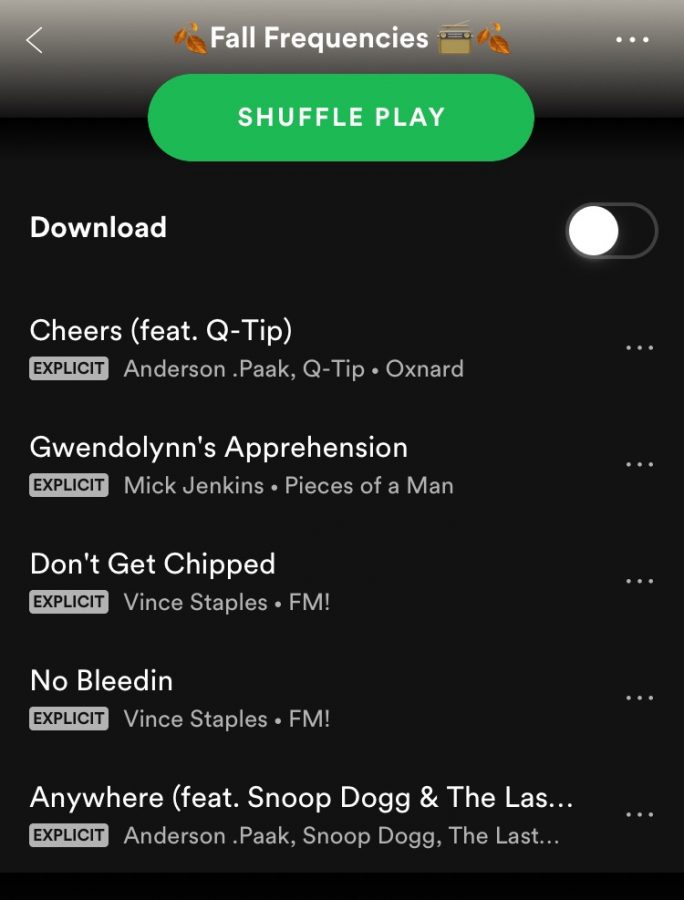 Over the course of this fall semester there have been numerous releases by artists who have shown prowess throughout their career. I have compiled a list of what I consider to be five noteworthy tracks of the albums I reviewed this semester.

I was unable to cover even half of the content released due to the high output of records. However, each top 10 entry has excelled in the two main categories that make or break a song which is the production and songwriting.

At number 5 is “Anywhere” from Anderson .Paak’s third studio album “Oxnard” released Nov. 16, 2018. The song features west coast natives Snoop Dogg and The Last Artful Dodgr over an instrumental that sounds as if it was arranged for Snoop himself, combining elements of neo-soul and R&B.

At the top of the track you hear Snoop say “Lemme get that intro” before the drum groove is introduced, sharing a strong relationship with the distorted bass groove cuts comparable to a breath of rustic fresh air. The Last Artful Dodgr is best known for her role in the Portland, Oregon’s hip-hop scene but on this record she shines providing a warm vocal harmony alongside .Paak.

Number 4 is a banger titled “No Bleedin” from Vince Staples’ most recent effort “FM!”. Staples is heard rapping over beats crafted by none other than rising producer Kenny Beats. Staples’ verse recounts his poverty stricken upbringing in Long Beach, CA coexisting with the street gang known as the Crips.

“My momma never made more than $25,000 a year, and she had four kids. Our house wasn’t dirty and we never lived in what we would consider the slums.”

Settled in the top three is yet another track from Staples’ “FM!” project called “Don’t Get Chipped” which features rapper Jay Rock, a longtime member of the record label TDE (Top Dawg Entertainment). The consistency of Kenny Beats’ production is evident throughout the whole album but track stands out as the peak of the album.

One of the opening tracks of Mick Jenkins’ third studio album “Pieces of a Man” titled “Gwendolynn’s Apprehension” comes in second place. The track is produced by Black Milk. Black Milk is a seasoned record producer working along sampling innovators such as J Dilla, RZA of the Wu-Tang Clan, and Pete Rock.

The retro eight-bit sample compliments the sidechained snare as Jenkins demonstrates he is worthy of the title of being hip-hop’s lyrical black sheep.Textured vocal harmonies toward the end of the song are foreshadowed by the ambient pads and random vocal chops as Jenkins begins his verse.

Finally, at number one is “Cheers” another track from .Paak’s “Oxnard” featuring the legendary MC Q-Tip who produced tracks for A Tribe Called Quest. The instrumentation is top-tier as well as the songwriting. It is almost impossible to not be captivated by the immense talent showcased in an almost six minute narrative.

The overall depth in the production incorporating a plethora of live instruments is only enhanced by the versatile duo rapping heartfelt lyrics of past friendships and romances. The female vocals on the track help create the soulful vibe, especially during the break before Q-Tip’s verse that serves as a vivid reflection.

Even if all of the entries are of hip-hop and R&B or a blend of both, each song artfully gives off different mood that is bound to grip the listener. Whether it’s from the playful perspective of Anderson .Paak, boisterous bars from Vince Staples bangers, or a collected cacophony from Chicago’s very own Mick Jenkins. The artists and producers featured create a lush sonic landscape that any music enthusiast can’t possibly ignore.