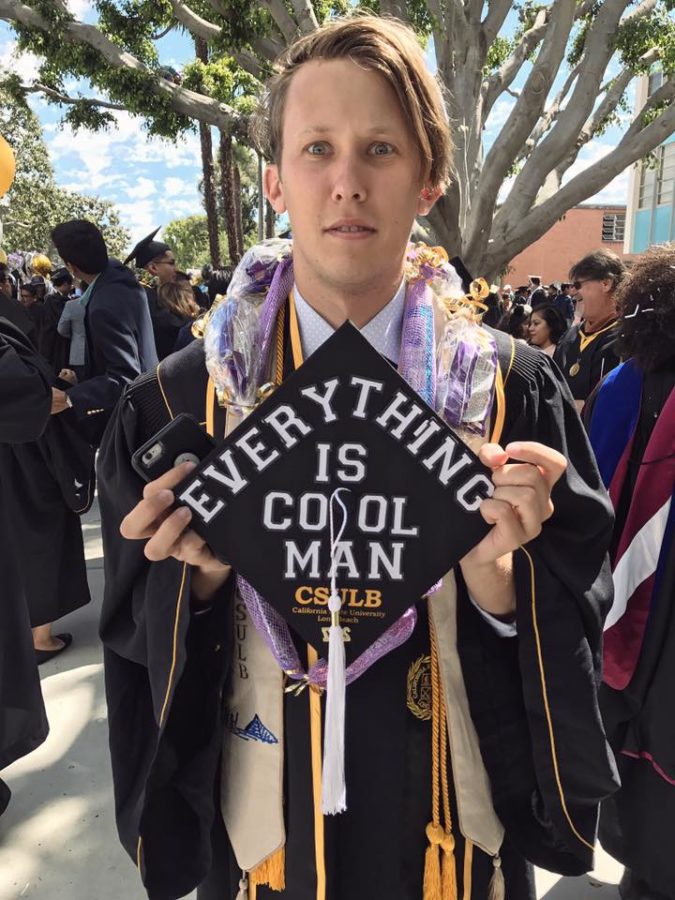 Alex Wechter celebrates his graduation from California State University Long Beach in June 2017 with a bachelor's degree in anthropology. He is now in a master's program there and works for an environmental survey company.

Editor’s note: “Where are they now?” is a continuing series in which Experience reporters connect with former students to find out what they are doing now and how their educational journey at LMC impacted their success.

A former LMC student found his calling in the field of anthropology and was part of a recent archeological survey. From trash to artifacts, the survey team uncovered a wide variety of items.

Alex Wechter, who attended LMC from 2012 to 2015, now attends California State University, Long Beach where he is part of a master’s degree program in anthropology and works for Rincon Consultants, an environmental research firm.

He chose LMC “mostly just out of convenience” as he grew up near the Brentwood campus and knew that the college has a good reputation. When he started at LMC, he did not have any true educational goal other than completing the general education courses required for transferring.

“I started off undeclared, I had no idea what I wanted to do,” said Wechter, who soon selected history as his major. “And then I took an anthropology class with Liana-Padilla Wilson— and that changed everything.”

Padilla-Wilson, a former LMC student herself, and now an anthropology professor, recalled Wechter as “one of the hardest workers,” adding that he was “really passionate.”

Wechter said LMC gave him the ability to test out certain fields and better understand what he wanted to focus on for his academic and career future.

He added that community colleges give students extra time and opportunities to find what they want to do in their lives and offered this advice to current students: “Don’t be afraid to take risks and step out of your comfort zone.”

As he found out at LMC, something that you may not think interests you could quickly become your favorite subject.

While anthropology is the broad field he wants to pursue, he constantly thinks about what he should specialize in.

Anthropology interested him because it focuses on what makes people human rather than history which is more concerned with human actions.

“I just became fascinated with the human condition of everything and kinda figuring out what it means to be human,” said Wechter.

To him, anthropology is the “study of anything and everything that involves people” and has many different applications in the world.

His job with Rincon gave him the opportunity to take part in a recent archeological survey in the Mojave desert.

That survey involved mostly “looking for anything that would fit into the historical record,” said Wechter, explaining that it could be something rather mundane, like a can or a bottle, or interesting artifacts of indigenous civilizations.

His work on the archeological survey convinced him to further pursue archeology within the field of anthropology so he can “give back by preserving these sites.”

Wechter described how his current goal is to work full-time at Rincon or a similar firm where he can “do more work in the archeological field.” While he is also still in graduate school, he explained that the pandemic caused him to put his master thesis on hold.

“I just wasn’t able to pursue it ethically because of transmission and COVID,” said Wechter.

His thesis work involves working with homeless students on campus and since the lockdown, he realized just how “important my work is and that it needs to be done to provide for people less privileged than I am.”

Wechter described how following your passions leads you to find more enjoyment in life and said the most important thing he has learned in school and work is “it’s all about being informed and taking risks.”