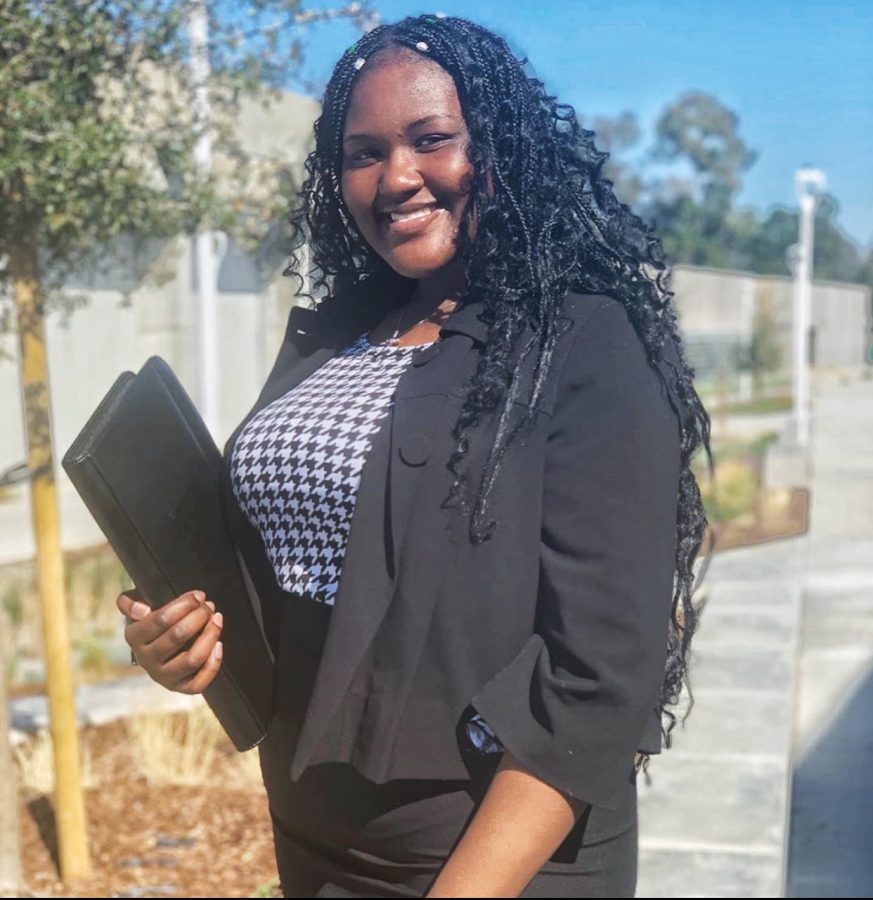 When thinking of a highly accomplished and committed college student, Thyra Cobbs may be the first person that pops into mind. Cobbs is a powerhouse name known throughout the Los Medanos College community and her legacy is one of leadership and success.

From the many academic and organizational titles and accomplishments listed on her public LinkedIn profile to her dedicated work ethic, Cobbs is turning out to be a heavily decorated LMC alum.

Her story is a portrayal of hard work and dedication with motivation of being a true leader that inspires all students of LMC.

She was born and raised around the Bay Area in Hayward, Fremont and Union City, but later moved to Brentwood after her freshman year, ultimately graduating from Heritage High School. She is a Bay Area city girl through and through, from her outgoing personality to her individual and fierce fashion sense that defines the Generation Z fashion term “boujee-streetwear.” It is no wonder she looks visually appealing in the many photos posted to advertise LMC on its website as well as its 2019 student handbook cover.

Anyone engaged in conversation with Cobbs can conclude she is an educated and determined woman who knows her goals in life and exactly how she wants to achieve them. Much of her determination and self-expectations are rooted in the fact that she is a first-generation college student and is eager to break the cycle by accomplishing as much as she can.

“My family always expresses their excitement for me and what I have accomplished. Currently, I have the most educational achievements in the family and I am still in disbelief. I would have never imagined myself accomplishing everything that I have. I feel very strong and empowered,” said Cobbs.

Cobbs is the embodiment of interpreting wealth through education as demonstrated by the diverse and sizable collection of literary works showcased on her desk and bookshelves. Many are written by authors and novelists within the Black community, a telling fact that besides advocating for the benefits and opportunities that education can give, Cobbs also advocates for closing the educational gap that many African-American students face.

“I think there is a lot of inactivity around supporting and uplifting the black student population,” she said.

Representation and advocacy are two values Cobbs holds dear, especially considering these were two of the main reasons she decided to run for LMC Associated Students president back in 2018-2019. Having had no student political experience before her campaign, Cobbs was in a constant state of anxiety leading up to the election results. What a surprise it was for the first-generation college student when she won.

Though the impending responsibilities and work-load that awaited her wrecked her nerves, there was one significant person who knew she could do it.

“My grandmother believes in me more than I do, so she wasn’t very surprised,” she said.

She emphasized that her biggest takeaway from her experience serving as president taught her not to doubt herself. She said she didn’t realize then what she brought to the table and why she got elected, but lists gaining confidence and professional skills as being two of her most important areas of growth.

While many who hold student government positions try not to add anything more to their plate during and after their term limits, Cobbs has been doing the exact opposite. While she was LMCAS president she was also holding down top leader positions in Umoja, Honors and EOPS, programs that she is still part of today.

But what is even more impressive is that Cobbs had the chance to transfer a while ago, but instead of following the generic route many UC-CSU transfer hopefuls take, she decided to further her community college education. Currently, Cobbs is enrolled in classes across LMC, DVC, Foothill College and De Anza College and by June 2021 she said she expects to have at least one associate’s degree from each of them.

Her work ethic is a testament to her strength and dedication, and involves sacrifice some college students aren’t willing to make.

“I also have to be willing to sacrifice my social life in order to succeed in my academics. With COVID-19, it isn’t as bad since we can’t go outside anyways,” she said, shrugging through the Zoom screen.

Cobbs knows the benefits and opportunities achievable by prioritizing education. Take a look at her LinkedIn profile page and you will notice the “Honors Research Scholar” listed under the “Honors & Awards” section — an honorary title given to few by Stanford University.

“I worked with a Stanford Sociologist on a research project centered around victims of sexual assault. I had to schedule interviews, learn interviewing protocol, transcribe interviews,” she said with a bit of pride in her voice.

Her time interning at one of the top-ranked private universities in the country, reinforced what she already knew about Stanford and made it her first choice for transfer. Few LMC students apply there due to its daunting admission process, but Cobbs is undeterred.

“It will be difficult to get in, but I am willing to take the chance,” she said confidently.

Cobbs is also considering other schools such as UC Berkeley, LA, Riverside, and Davis, as well as some of the CSUs. Cobbs wants to stick to her California roots and plans to transfer in Fall 2021, majoring in psychology and African-American studies.

As for whether or not another student election is in her future at other institutions, Cobbs let the question float in the air for only a second.

“Yes, I would definitely serve as president of student government at the four-year university. I know that it will be a lot more challenging because there will be more students to outreach to and advocate for, but I always love to challenge myself. Even if I do not win, I will still serve in the student senate, ” she said.

While many of her achievements are a result of hard work, Cobbs also credits the faculty and staff at LMC for her successful journey.

“I have had so much help at LMC that I can’t count the people using my hands,” she said.

And although she has been inspired by the support of so many, she also serves as a role model to others.

“I’m really proud of how far she’s come since high school” said LMC student Maracelle Nasrat who went to high school with Cobbs. “She inspires me to achieve more than just my goals, she motivates me to hold myself to no limits.”

No limits is what Cobbs is all about, and her advice to students on the fence about venturing as deeply into the academic world as she has, comes from what she has learned along the way

“Never doubt yourself and don’t let anyone tell you what you can or can’t do,” Cobbs said, “Your life is what you make of it, so choose your path wisely.”