Friends through thick and thin

Jasmine Combs and Sierra Heuer are best friends that help each other deal with difficult issues. 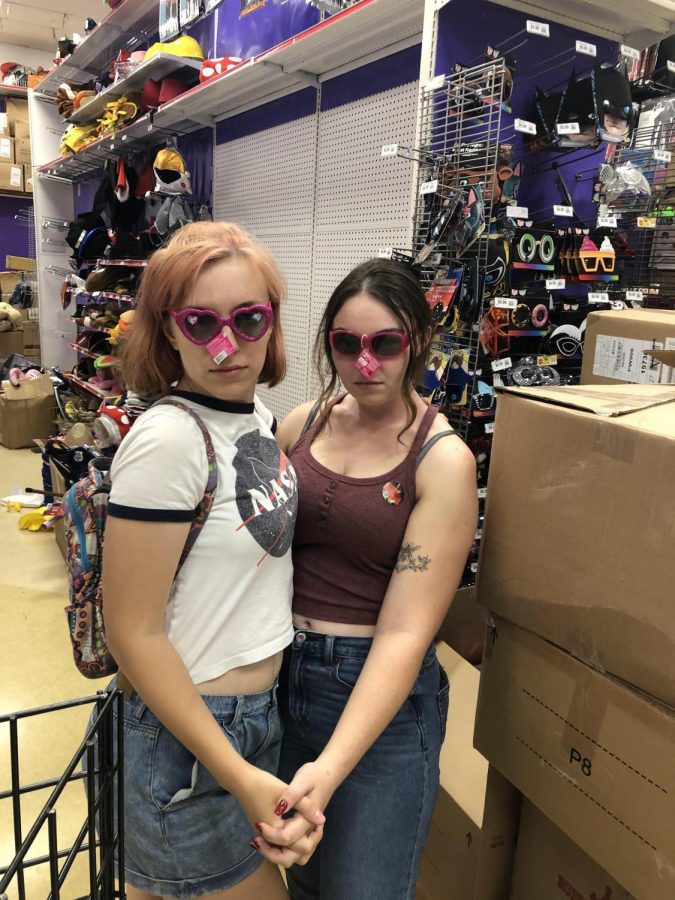 Sierra Heuer and Jasmine Combs check out different props at the Brentwood Party City in 2019.

Muhammad Ali once said, “Friendship is the hardest thing in the world to explain. It’s not something you learn in school. But if you haven’t learned the meaning of friendship, you really haven’t learned anything.”

The true meaning of friendship is a difficult thing to learn. Sadly, not every friendship lasts forever. If it does though, you’re one of the lucky ones.

Two LMC students in particular can consider themselves the lucky ones. Jasmine Combs and Sierra Heuer met and became friends in third grade, but have been best friends since seventh grade, and it’s safe to say there’s no end in sight.

But the longevity of their friendship, as impressive as it is, is only a part of their story.

“I found out I had epilepsy after I’d randomly had a seizure two separate times and was diagnosed by a neurologist when I was a sophomore in high school,” said Heuer.

Combs, on the other hand, was diagnosed with arthritis as a four-year-old, though she “started showing symptoms when I was three.”

But they haven’t let these conditions stop them, both have big dreams. Combs wants to go into music production and Heuer dreams of becoming a college professor.

“The biggest obstacle is knowing my limits and being able to communicate them with people,” said Combs. “There are some days I can do everything like a ‘normal’ person, some days I can work from home, and some days I can’t do anything at all but stay in bed. I just have to listen to my body.”

Heuer explained that her recent epilepsy diagnosis has changed her life in a variety of “very small, very specific ways.” There are things she can’t do at all, like skydiving or snowboarding, “anything really adrenaline-heavy or risky.”

And then there are the day-to-day changes she must make.

“The more prominent things I can’t do include drinking alcohol at any point in my life, staying up later than normal, swimming in pools without constant supervision, or taking baths without leaving the door unlocked and letting someone know nearby. The biggest one is that I’m unable to drive,” said Heuer. “Unfortunately for my seven-year-old career decisions, I won’t be able to be a mermaid performer.”

The most inspiring thing about their friendship is how far they’ve come through their disabilities together.

Combs explained how she’s been able to help Heuer deal with her epilepsy diagnosis.

“The best thing I can really do is be there for her when she needs moral support or needs to talk and make sure she feels validated,” said Combs. “A condition like hers is a huge mental burden that she has, thankfully, come to terms with.”

Combs has done a lot of research on epilepsy to be helpful to her friend: Learning how to help when she is having a seizure to just knowing what Heuer needs after having one. Whenever they get together, Combs reminds her of the time so she doesn’t accidentally miss her daily seizure medications.

This isn’t a one-sided effort, however. Heuer also puts time into helping Combs with her arthritis.

“I mostly just try to support her emotionally and listen to what she says she needs,” said Heuer. “If she needs to sit

down and use three ice packs for her joints I’m going to try and grab as much ice as possible so she can use it.”

They acknowledge how much they have impacted each other’s lives with meaningful looks.

“Oh god,” said Heuer. “I don’t know where I’d be without Jasmine. She’s really helped me build confidence as a person and helped me learn about my own self worth, even helped me become less of a fashion disaster.”

And Combs feels the same way about Heuer: “She has made up so much of my growth as a person.”

The young women have helped each other in so many ways and credit a little piece of themselves to the other.

“Describing our friendship is challenging, but I’d say empathetic, we both understand how it feels to be students going through something and we try to look on the bright side or poke fun at our situations,” said Heuer.

A true friendship is something some people try to find for their entire lives, but Combs and Heuer are lucky enough to have found that friendship in third grade.