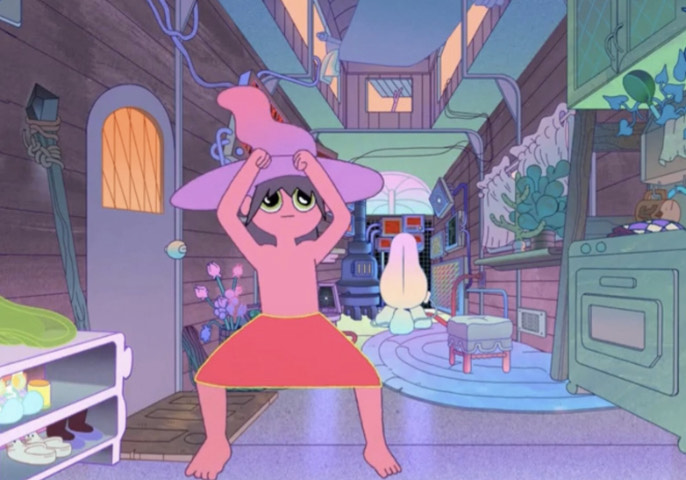 Screenshot from the Netflix show "The Midnight Gospel"

While all the craziness in the world is still occurring, I’m sure everyone is looking for something to keep their mind off things. We’re all searching for that one show, video game or hobby to keep us distracted. Personally, animation has been one of my favorite ways to escape and I think Netflix has filled that void with their new show.
The streaming service recently added the show “The Midnight Gospel” to its platform. The show follows the main character, a man named Clancy, who travels to different simulated planets that are nearing their ends.
“The Midnight Gospel” could easily be explained as an animated podcast as most of the dialogue comes from Comedian Duncan Trussell’s podcast. Clancy, voiced by Trussell, travels these worlds while running his own podcast, or ‘spacecast’ as they refer to it in the show.
The animation style is a strong highlight of the show and is filled with soft neon colors, dark scenes and action. It’s also fun to spot the ways in which the show has taken creative inspirations from other shows.
At times, it feels like the show ‘Home Movies,’ and the third episode of the series strongly reminded me of an old animated movie I saw a long time ago called ‘Cat Soup,’ which was quite surreal as this show can be at times.
I think all of the colors and different magical planets slightly resemble life on earth in a dreamy and possibly metaphorical way. So much is going on around the characters as they carry on with their various conversations. Many of the conversations strongly fit the subject matter of the animation by covering topics such as drugs, magic, spirituality, loneliness, love and death.
In episode three, Trussell speaks with Anne Lamott, an American novelist who has covered many morbid subjects in her own work, learning how to bring humor out of telling her stories. Lamott speaks as this magical animal talking to Trusell about passing away while they both calmly handle dying.
One thing that makes ‘The Midnight Gospel’ special is that it isn’t just people talking, it also features side narratives and added dialogue aside from the pre-recorded podcast that has characters reacting to scenes accordingly. Episode six as a strong example of this, as Clancy deals with the happenings in his own world.
While I have not completely finished this show just yet, I am excited to finish it because I know it will hold many more meaningful, strange and magical moments, making it re-watchable. The show feels like something you wouldn’t come across very often and I highly appreciate what was put into it. It shows the importance that conversations can hold.
As Trudy Goodman says in episode three, “We don’t really let it in, about our mortality… The time of death is uncertain, but death is certain. If we really got that, we would have fewer of the kind of moments where we regret having wasted our time or somebody else’s time… just as horrible and brutal as the world can be. It’s gorgeous and exquisite too.”
Terrible things are happening in Clancy’s world and the worlds around him, but it still seems so wonderful and full of exploration, just like ours.