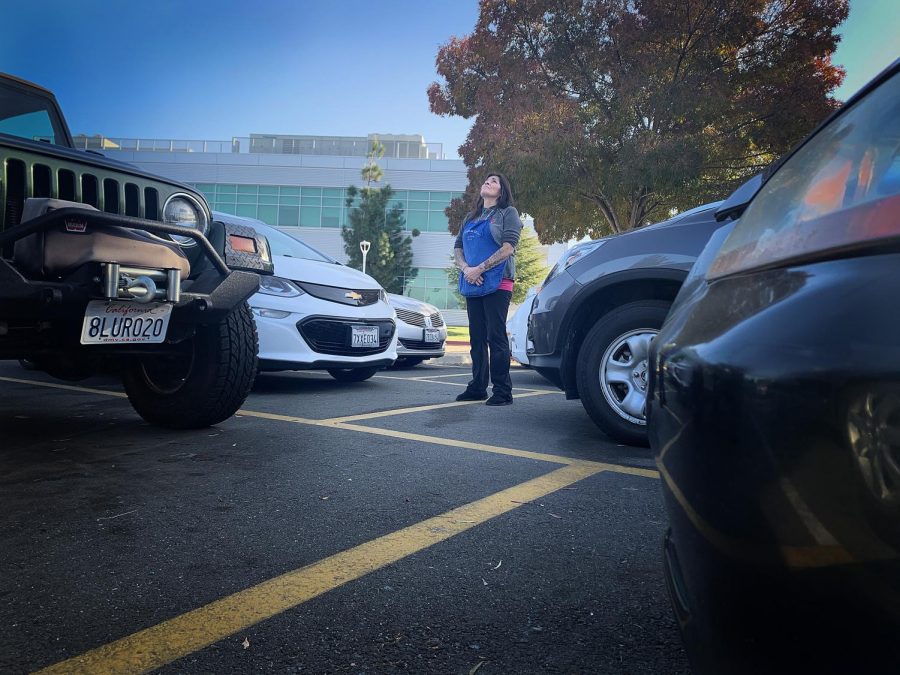 Leticia Webb returns to the spot where the good Samaritan saved her life in LMC’s Parking Lot A.

Abiding by her unspoken daily schedule, Webb went outside to eat her lunch in her car, as she does every day during her break. This particular afternoon, Webb decided to enjoy a burrito and soda from El Pollo Loco for lunch.

At approximately 12:05 p.m., Webb took a bite of her burrito and lost her ability to breathe. Choking on the food, Webb took a drink of her soda to try and wash it down, but the soda came back up and the burrito stayed lodged in her throat. At that point Webb realized she needed help before she completely lost consciousness, and got out of her car.

“I had five minutes to eat and I took a bite and as I swallowed it. I knew — I knew I messed up because it got stuck in my throat,” said Webb. “I started to panic. I remember I was thinking ‘oh god, I can’t breathe, I can’t breathe.’”

Frantically scanning the parking lot for assistance, Webb saw nothing but cars and began to thrust herself against her car in order to try and unlodge the food herself. When that wasn’t effective, she began to run towards to Child Study Center in hopes of being seen.

Four of the men in the group immediately backed away from Webb, as it was Halloween and they didn’t know what was going on. Albeit, the fifth male in the group reacted immediately when Webb approached, asking if she needed the Heimlich.

“Right away he just grabbed me twice. One thrust nothing, the second thrust it came out and then I gasped for air and then as quick as you know it he disappeared,” said Webb.

The individual who saved Webb’s life, and his group of friends, all disappeared immediately after the burrito was unlodged from her throat.

“That guy’s an angel, he doesn’t realize that he saved my life. Even if he doesn’t come forward, I just want him to realize that he really changed my life tremendously. I mean he gave me back my life that I saw leaving me real quick,” said Webb, crying. “He helped me with no hesitation at all, not a lick of hesitation.”

Searching for her saving grace, Webb scans the parking lot every day trying to find the student that gave her the Heimlich. Although she hasn’t found him yet, Webb hopes to thank him for saving her life if he ever comes forward.

Webb describes the student who saved her life as what looked like Asian male, with dark curly hair and glasses, “kinda stocky, kinda well built… that’s all I know about him.”

“The thought that came through my mind was my children and how I wasn’t going to die with a burrito in my mouth,” said Webb. “I’m a grandma, I’m a mother, I’m a teacher… I take care of my mom and help her out a lot too.”

A mother of two, one son age 35 and one daughter age 35, as well as a grandmother to a 12 year old boy, may not have been here today were it not for the student that saved her life.

“It was the most terrifying moment in my whole life,” said Webb. “Whoever he is, I really thank him tremendously from the bottom of my heart.”