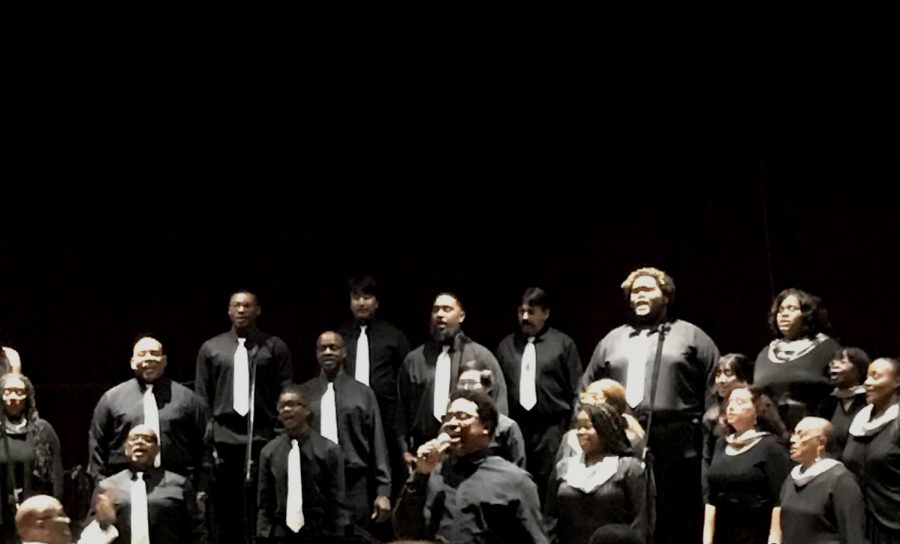 The Choral Adventure Concert held Tuesday, Oct. 29 at Los Medanos College proved to be a delightful event in terms of music, and even something that many people would probably find educational.

Professor Silvester Henderson conducted the event and there were a few special guests that attended the concert. The special guests consisted of Dr. Phillip Harris, Ric Alexander, who performed, and David Chong an LMC alumnus who spoke.

During the concert, Henderson talked about his feelings towards his career and his experiences throughout it.

“My greatest accomplishment is having been a professor working with young people,” said Henderson.

He went on to explain how the performers have worked hard, and deserve praise for the level of care they put into it. “They do good in my heart; they do good in yours,” said Henderson.

Solo performances then commenced. Overall they were excellent. Kyle Martinez’s solo performance of “Losing My Mind” by Stephen Sondheim was particularly sorrowful, and something that would probably bring a tear to someone’s eye.

The Gospel Choir then got its chance to perform; they were superb. During the performance, some of the attendees were so moved by the music they stood up and danced to the rhythm.

Chong got a chance to speak about his upbringing, how his parents were first-wave, working-class immigrants from poverty-stricken countries in Africa. Chong shared how his father was deported due to suffering schizophrenia and how Chong struggled academically for most of his life, disclosing even that he had straight Fs in high school.

It wasn’t until Chong attended LMC that he start excelling academically. The reason for his profound change is that he was able to learn more about African history and African American music. “I had the opportunity to learn about me,” said Chong.

Chong then said that he felt that the reason why he did so poorly is that the school system has to do with racial prejudice in the system.

“Traditional music education oppresses students based on race, culture, and other social statuses, regardless of the original attention such as labeling Afro-centric ways of musicing as musically unorthodox,” said Chong, explaining how some African-American students may feel alienated due to how the music curriculum is structured.

There were a couple of duets after this, as well as a couple more songs performed by the choir. One of the duets, Casey and Erica Pringle was a husband-wife couple who were also former students of Henderson.

The reception to the event was extremely positive, with many people giving a standing ovation after the last few performances.

“I feel it’s a great opportunity for people to come out, see and connect to music,” said Tyrell Burks, one of the performers, explaining his feelings about the concert.