Audiences get down to rhythm and beat 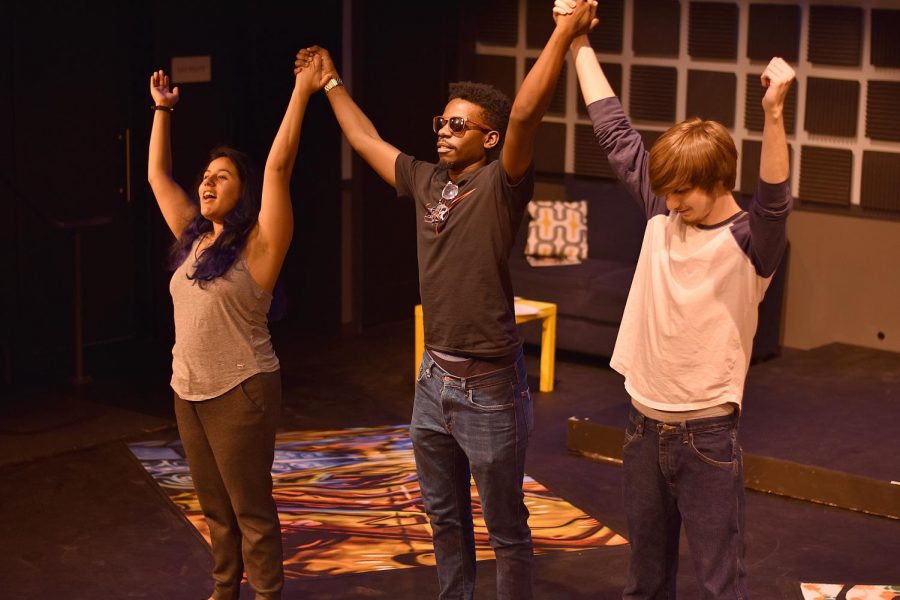 The student-produced play “Hype Man,” which debuted at the Los Medanos College Little Theatre Thursday, Oct. 10, proved to be a resounding success. The play was written by Idris Goodwin and is directed by Terrance Ivory.

The story of “Hype Man” features three friends in the hip-hop industry dealing with various social injustices that plague society such as racism, sexism, police brutality and cultural appropriation.

In the story, Verb, an African-American hype man played by William Thompson, and Peep, a female DJ played by Kayla Martinez, come into conflict with Pinnacle, a white-rappper they work under played by Jason Wolcott, when they try to be more politically and socially active, especially in regards to their music.

The story features three characters and how they confront how their sex, race and class shape how society views them and what potential drawbacks and privileges could be their result.

The story feels true to life and no one is really demonized. The characters felt entirely human in the way that racism or sexism is displayed by each character, albeit condemnable, in such a way that makes clear that the characters aren’t monsters for their flaws. The chemistry between the actors is plentiful – one could truly believe that the actors on stage had been friends for years.

The performance got off to a bit of a rocky start because, initially, things were a little awkward. Nothing majorly wrong, just a few fumbled lines from an actor here or there.

As the play progressed, the performances only became better and the audience was clearly enthralled to the story. But, overall, the best performance came from Thompson. He was charismatic in his performance, his movements were exuberant and excited, and, overall, very entertaining to watch on their own. Thompson handled the emotional beats of the play very well. You could truly believe that he’s a dissatisfied young black man who wants to change the system and feel his rage and sorrow.

Wolcott’s performance was a close second in terms of quality. His character’s expressed reluctance to get involved with political or social activism felt totally genuine. Watching the performance, you grow irritated by his character’s persistent apathy and whining about his friends wanting to be activists instead of focusing on problems that are specific to him but in a good way. It gives a realism to the story.

Wolcott truly captures the tone with centrists, especially white centrists tend to have, in regards to racism or sexism. That those problems aren’t really major issues in society, especially in parts of society they function in. It’s a self-centered attitude and Wolcott’s portrayal of that sort of attitude is dead-on.

Martine’s performance was also splendid. You could truly feel the frustrations her character expresses about being a woman in the hip-hop industry.

The music used during the play, while simple, was utilized fairly effectively. The audience applauded strongly at the ending of the play which featured a call to action.

Performances of “Hype Man” will continue on through Oct. 21 at LMC Little Theatre. For tickets and more information, visit www.losmedanos.edu/drama/productions.aspx.