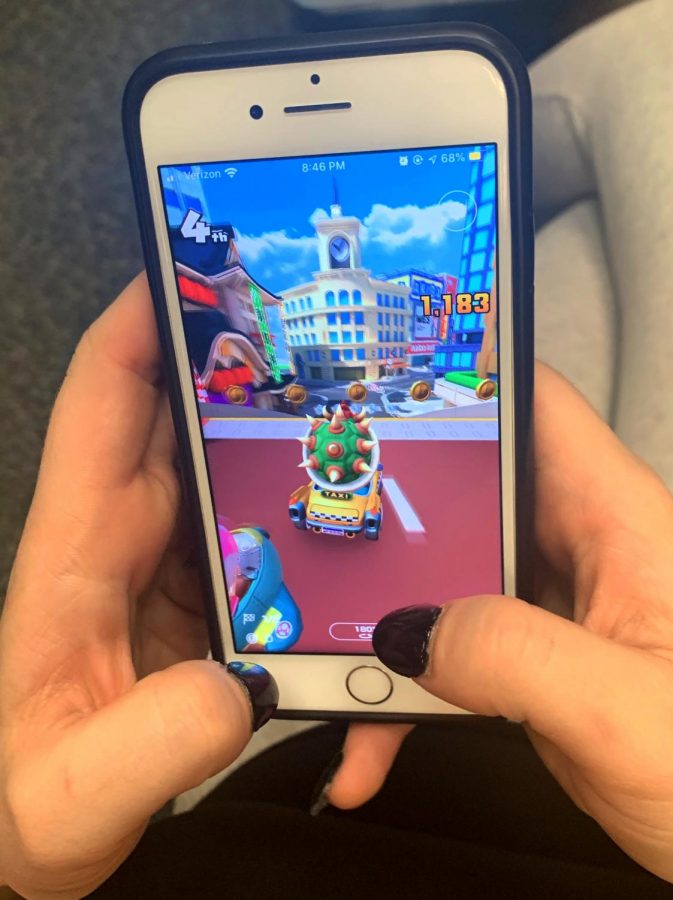 The new mobile Mario Kart game, Mario Kart Tour, was recently released on Wednesday, Sept. 25 and has since become number one in racing, and in the Apple App Store.

The app already has more than 677 thousand reviews in the Apple App Store, with an overall rating of 4.8.

Yet there are a few glitches and smaller issues in the app, such as the daily coin limit and slight glitches during gameplay.

“The game isn’t very efficient, as you need to play many hours a week in order to collect enough coins to make them useful for anything. For example, you only collect on average about 15 coins per race, but everything in the shop costs anywhere from 200 to 8,000 coins,” said student Hailey Pecknold. “Plus, the game puts a limit on how many coins you can collect in a day.”

When Mario Kart Wii was released in April of 2008, the outstanding reviews started pouring in almost immediately.

This title left a huge impact on electronics consumers throughout the nation, and was quickly made available on the DS(I), Switch, PC computers and more.

“Who hasn’t played Mario Kart when they were little?” said Jade Daily, a student at LMC.

Albeit, the most recent Mario Kart app developed by Nintendo has created waves of elation and gratitude throughout the nation, even bigger than before.

“New data from app analytics firm Sensor Tower, cited by VentureBeat, indicates that Mario Kart Tour reached the number one spot on the free App Store charts in 58 markets today. That includes both the United States and Japan,” according to 9to5 MAC, a news site that announces and reviews the newest electronic devices and apps in the market on a daily basis.

Mario Kart Tour is available on both iPhones and Androids, and is free of charge to  users who just want generic gameplay options.

There are other payment options as well, such as the $4.99 per month membership that unlocks badges from Gold challenges and Gold Gifts for tour races, though these are not required to play the game.

In the most recent update, Nintendo added a multiplayer option to the game in which users can add their friends who have registered Nintendo accounts through username and play against them.

Before this multiplayer option was added, the app creators developed a plethora of computer-generated players to race against users. If you have not played multiplayer with people you know are real, you are racing against fake users tailored to seem as real as possible.

“They [the faux racers] have names like FOURARROW, kieronsc, chorns, metnka119, and usually, you’ll see at least one player in a race in Japanese script. The point here is clear: these are supposed to look like real players rather than the simple Nintendo characters that fill out a normal Mario Kart race. Don’t be fooled: they’re not,” said David Thier, Forbes Senior Contributor.

Regardless of whether or not the players are real, users around the world have found enjoyment in the newest Mario Kart title.

Mario Kart Tour is perhaps Nintendo’s biggest mobile success yet, with over 90 million users in the first week of its release, trailing only slightly behind Pokemon Go. The app is only expected to improve and grow from here.