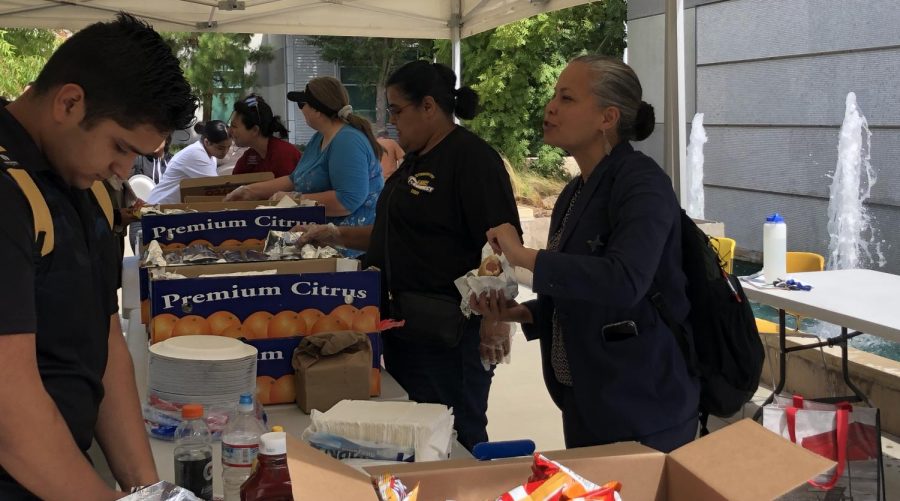 Mustang Day kicked off the fall semester with free food, provided by the Office of Student Life, and a booth for Student Services to assist students with any questions or concerns Wednesday August 29 in the outdoor quad.

Many student services and clubs were present in an effort to attract new students into their programs. The programs had the opportunity to get a table and promote themselves to students who attended the event, as well as students who walked through the outdoor quad during the event.

A total of 10 student clubs were at the event recruiting new members. Among them was “Advancing Toward Achievement,” a STEM-based group entering its second semester as a chartered club on campus.

Advancing Toward Achievement club president Anthony Early said, “For today’s event, it’s just trying to recruit new people at LMC who do not know about the club and would like to be involved, but [have not heard] about us yet.”

The Office of Student Life, who organized the event, provided free food for students who attended the event. A total of 20 pizzas, 500 hotdogs, and 500 water bottles were handed out to students.

“I think [the event] is going really well. I’m really happy with the turnout,” said Teresea Archaga, Director of Student Life. She continued, “We actually have community partners this time around, which is a little bit different than what we normally do, so that’s even more exciting.”

Community partners who provided information to students were Contra Costa and Solano Food Bank and the Community Emergency Crisis House, among others. The food bank has been an important part of the LMC community since it was introduced, it allows students to receive free canned goods to take home.

“We have some clubs [and community partners] tabling which is pretty good, more than normal, that’s always good,” added Archaga.

“It’s great! You get to meet people and there’s free food, and it’s a good way for people to find somewhere where they fit in and be themselves,” said second-year student Carla Martinez.

At the end of the event, Archaga made sure to thank everyone who attended the event and those who helped make the event the success that it was.

“I want to say a big ‘Thank you’ to all my friends who stepped up and helped me at Brentwood yesterday and Mustang Day today.”