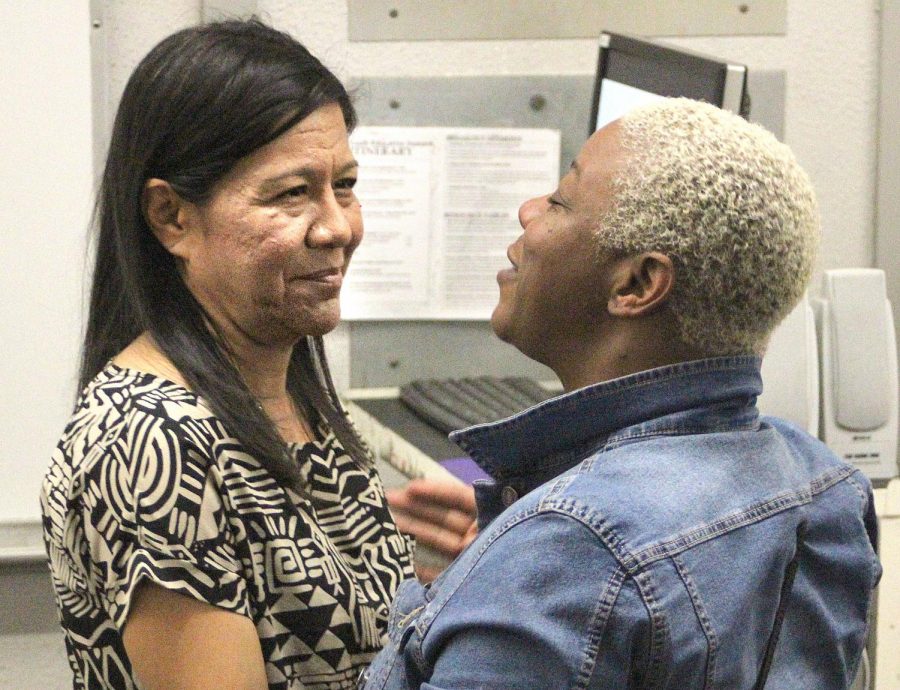 As a child growing up during the zenith of the labor movement, Juanita Chavez, niece of César Chavez, embodies the movement started by her mother Delores Huerta. Her mother, Delores Huerta is the head of the Delores Huerta Foundation. The non-profit is a community benefit organization that organizes at the grassroots level, engaging and developing natural leaders. Huerta, a recipient of the Presidential Medal of Freedom from President Barack Obama, received her education from the University of the Pacific.

“My family’s path to education started at the community college level,” said Chavez.

The students of Professor Joshua Bearden’s history class, having watched the documentary “Delores” about the life and work of Delores Huerta, were treated to a keynote speech by Chavez to further examine the finer points of the film.

Among the topics explored about the event ranged from intersectionality, the power of women organizing and Huerta’s work challenging gender norms. At the heart of Huerta’s work was “helping ordinary people do extraordinary things” and the documentary chronicled the rise of the United Farm Workers union.

The UFW worked hard to fight for civil rights of migrant farm workers. The union also helped launch critical boycotts of stores who profited from worker abuses and even organized a grape strike across California. That work continues today and currently fights for worker’s rights and also organizes to ban poisonous pesticides on fruits and vegetables.

Founded in 1962 by Huerta in partnership with Cesar Chavez, they were often paired with the Civil Rights Movement of that era. Huerta was often in the company of Coretta Scott King and Robert Kennedy.

Describing her philosophy behind her mother’s community activism, Juanita Chavez reflects on the advice passed down to her: “If you can move 5-10 people to action, we can have a movement.”

Today, the Delores Huerta Foundation is thriving and located in Bakersfield, California with field operations throughout the state. Chavez, a board member since its inception in 2003, has been dedicated to continuing her mother’s advocacy.

Some of the social injustice issues the organization addresses include ending the school to prison pipeline and her organization was instrumental in passing Proposition 30, which helped to increase state funding to local schools.

This keynote speech was part of a series of educational events held by Professors Joshua Bearden and Courtney Goen.

“Ms. Chavez has been great to work with. She was very accessible and willing to come speak to our students,” said Goen.

The students were receptive of the film and the keynote by Chavez. LMC student Karina Gomez walked away from the speech inspired by the documentary.

“I love learning about my culture as well as other cultures,” said Gomez.

As the event wrapped students met and took pictures with Chavez and she left them with a call to action: “Si se Puede! Si se Puede!”

You can learn more about the Delores Huerta Foundation at www.doloreshuerta.org.