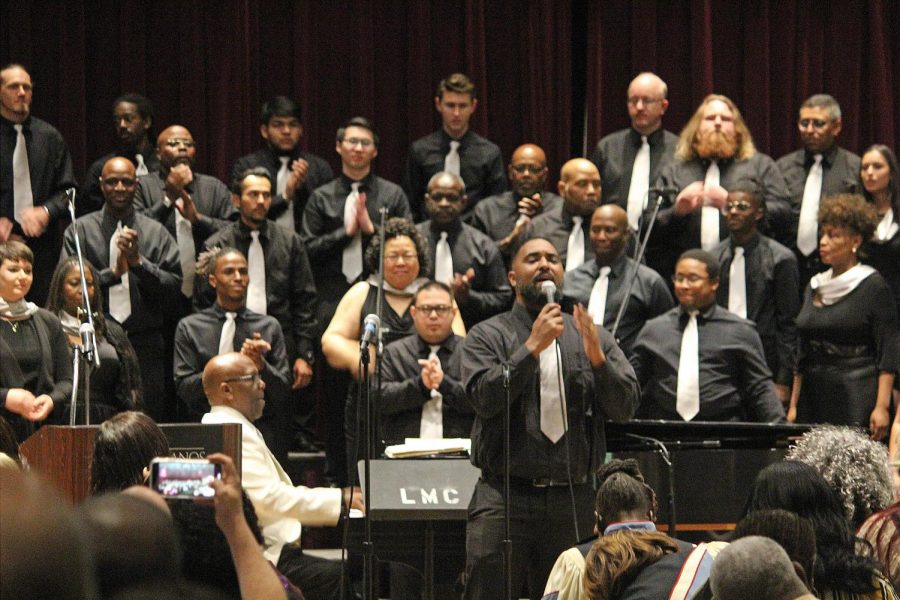 A variety of local and regional guest performers joined in on the celebration, as well as celebrity vocalist Kyla Jade, a top contender from NBC’s “The Voice.”

LMC’s gospel celebration began as a way “to show the nation the value of urban music as it relates to higher education,” explained Gospel Choir Director Silvester Henderson, who conceived of the event 25 years ago.

Early in the program he paid tribute to the late James Smith who served beside him as assistant of the Gospel Choir for 20 years. Henderson took his position at the piano as soloist Carol Bussey, a member of the LMC Gospel Reunion Mass Choir, stood center stage to lead the first selection of the evening, “That’s When You Bless Me.”

LMC President Bob Kratochvil, who wore silver to honor the choir’s silver anniversary, congratulated Henderson for “25 years of just an incredible institution for the community.”

Henderson used the occasion of a packed house to recruit new voices and add a bit of levity to the program.

“We found a researcher that…says group singing is cheaper than therapy,” he said to the audience which responded with laughter. “Think about it. Healthier than drinking, and certainly more fun than working out. So instead of some of you going to a therapist, you [should] come and sing in a gospel choir. Now come on, that’s your therapy.”

The Gospel Choir then chimed in with  “Psalm 117” — The Choral Praise Anthem, and Henderson quoted Dr. Martin Luther King, Jr.: “’Darkness cannot drive out darkness — only light can do that. Hate cannot drive out hate — only love can do that,” adding, “Doesn’t that make sense? We love you, thank you, Psalm 117.”

This year’s event was not only a celebration of gospel music, but also a Celebration of Women’s Diversity, and three women were recognized for their contributions: Pamela Haynes, vice president of the Board of Governors of California Community Colleges; Dr. Yvette Gullatt,

vice provost of Diversity and Engagement at the University of California’s Office of the President; and Chelsea Esquibias, regional coordinator for Guided Pathway at the California Community Colleges Chancellor’s Office.

Motivational speaker Kirk Anthony James, from New York University’s Silver School of Social Work, focused his remarks on the story of a young man sent to prison 25 years ago for possessing a few ounces of cocaine.

“The judge told him, at 18 years old, as a first-time offender, that ‘I’m doing you a favor by only sentencing you to seven years to life,” James said. “He would ultimately be released in 2003 after serving nine years in prison.”

James explained that sentence was equivalent to a sentence for eight counts of murder, adding that, “During those nine years, he got educated…He read… he went to school, he had an opportunity to get an associate’s degree.”

When released from prison, the man continued his education, earning bachelor’s, master’s doctoral degrees, and studying how prison systems treat people who look like him.

“That story, if you haven’t put it together yet, is my story,” James said, adding, “The umbrella that I work under is ‘evolve.’ If you look at the word ‘evolve,’ it has ‘love.’ To evolve, we must love.”

The rest of the inspirational evening unfolded with selections from the Los Medanos College Gospel Reunion Choir, including “LMC Gospel Reunion Medley” and “Rock of Ages.” Then the guest performers took their turn in the spotlight. Celebrity vocalist Jade wrapped up the evening’s musical entertainment and encouraged the audience to join in if they knew the words.

The audience was inspired all evening with the words and the music, and many were on their feet, frequently lost in the moment, dancing, clapping and singing along.