Pittsburg park gets a facelift 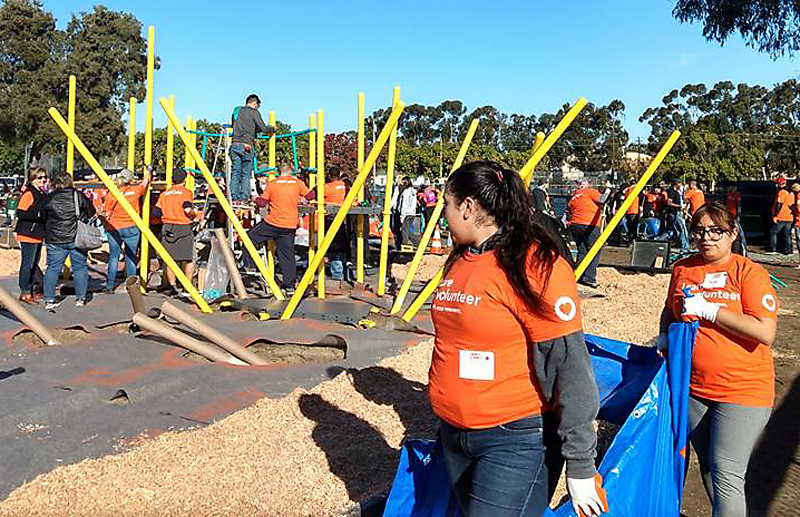 Volunteers lift materials and hold up poles during the playground’s construction.

More than 200 volunteers from Kaiser Permanente, First 5 Contra Costa, East County Regional Group (ECRG) and the city of Pittsburg did their part in helping local area kids by building a new playground together. The volunteers gathered Saturday, Nov. 11 to construct the new play structure at City Park on Railroad Ave & E 17 Street in Pittsburg.

LMC student Abisola Ishola decided to make her mark in the community by volunteering for this event as a representative of Alpha Gamma Sigma.

According to Ishola, “The event was amazing!”

“This was the perfect event for me to help serve the community by impacting the lives of children,” she said while she stood in line to register. All volunteers received an orange T-shirt, donated by Kaiser Permanente, and instructions for the 6 hour process with one stop for lunch.

“It was really cool seeing how the individual components that we were working on came together to make a uniform playground,” Ishola said.

KaBOOM! Project Manager Brian McNamara welcomed the volunteers with coffee and breakfast burritos. KaBOOM! is a national non-profit dedicated to giving all kids – particularly those growing up in poverty in America – a childhood filled with balance and active play, so they can thrive. Having collaborated with partners to build, open or improve more than 16,700 playgrounds and having served 8.5 million kids, they have created great places to play and inspired communities to support play, and they continually work to drive the national discussion about the importance of play in fostering healthy and productive lives.

“It felt good knowing that we helped create a space where kids could go out and have fun,” said Ishola.

City Park was chosen for this project because it is in a low-income area in Pittsburg, has a high concentration of young children and was identified as being in need of priority improvements by First 5/ECRG’s Pittsburg Parks Assessment.

The city is also continually reviewing its parks and play structures to determine what improvements can be made, according to a recent press release from First Five Contra Costa. The playground is estimated to impact the lives of 1,600 kids in Pittsburg.

That same press release stated “a playground is more than a playground. It’s a brain-expander, friend maker, and muscle-builder. Play is central to a child’s ability to grow into a productive adult. It can transform children from sedentary, bored and solitary to physically, mentally and socially active.”

To learn more why #playmatters and why cities are embracing #playability: visit kaboom.org or join the conversation at twitter.com/kaboom or facebook.com/kaboom