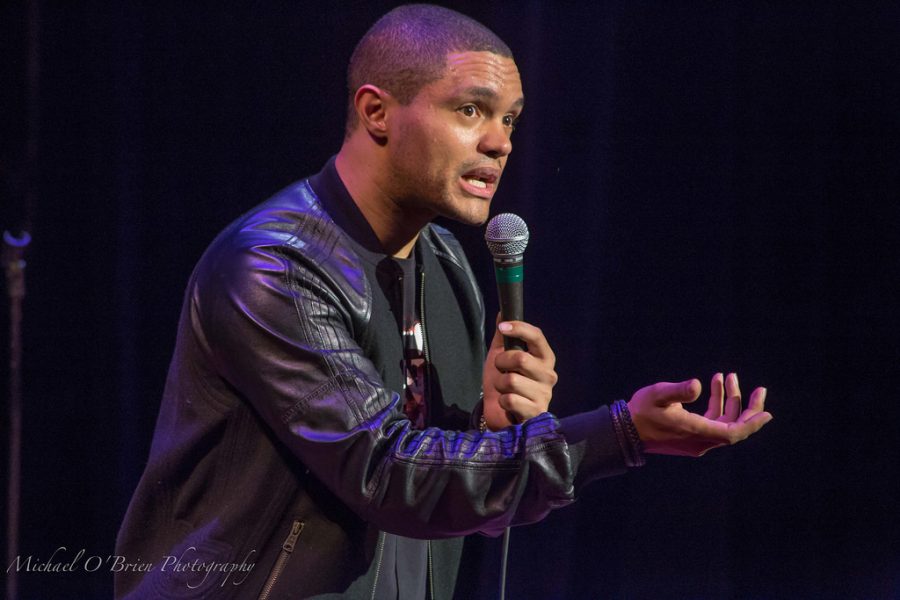 Now best known as the host of “The Daily Show,” comedian Trevor Noah performed a standup routine for Stanford students’ friends and family as a part of Family Weekend Saturday, Feb. 25 where he, despite some problematic stances on American social issues, managed to remain charismatic.

As a family weekend exclusive event it meant that admission for the general public would not be guaranteed, but with the line beginning with a family who had been waiting at the door since 1:30 p.m. and ending with about a 10 minute walk away from the venue, the long wait was evident for all.

By the time the event began there were more people outside rather than inside the building. Noah expressed his surprise and sadness for the amount of people who were still waiting outside.

One of the best things about Noah is that he isn’t afraid to call people out and shine a light on reality in a way that may make others uncomfortable.

He used cultural and racial issues as a base for a majority of his show.

In a retelling of the booking of his first show in Compton, which he had never previously heard of, he recalls his friend’s referral to the city as an “urban” area. He also used this to comment on non-black people’s tendency to whisper black instead of just saying it.

Having grown up in a South Africa, Noah has a unique perspective on American culture — a point he made consistently throughout his performance.

Although a majority of his comedy is based in truth, he at times comes off as self-righteous due to his smug delivery of jokes. This is most evident in his bit about the n-word.

He said because the n-word means only means “to give” in Xhosa, the language he grew up speaking, he was never exposed to the derogatory meaning of the word and so it doesn’t have the same effect on him.

He gave an example in the context of South Africa where there is another word equivalent to the n-word, which most Americans would only see as the name of a probiotic.

Whenever he has heard the n-word used against him, he just uses it as an opportunity to give the slur back to them and show them it has no meaning to him, because to him it’s not about the words we use, but the actions we take.

Although his jokes are completely relevant to his life and his perspective, his delivery almost makes it feel as though he believes what he says to be a fact.

Within comedy it’s funny to joke about the truth, but only with the right audience.    Although he tried to make the point that he recognized it as a negative word in America, an audience consisting of mostly white upper middle class privileged people hearing the n-word repeatedly thrown out there as something that “shouldn’t have meaning” is not a productive comment to make within American society.

As much as one person chooses to change how they are affected by a word, such as the n-word, it doesn’t change the societal meaning of the word — it’s still a slur.

Still, it wasn’t all bad. His piece was also helpful in pointing out the necessity in questioning everything and recognizing that not knowing everything is okay. Despite some erroneous remarks he made, his stand-up sparks conversations and there’s something likeable about Noah and his thoughtful way of speaking.

Following his performance, he stayed for a Q&A session, where it was clear that his position as a comedian has shifted. Since taking over “The Daily Show” after Jon Stewart left, Noah has assumed this social responsibility to be politically aware. Most of his questions had to do with social commentary and his show rather than as his journey as a comic.

Where Noah is to go from here is up in the air. As someone who is being seen as more than just a funny man now, there’s still some thought that needs to go into what his role as a public figure will be.