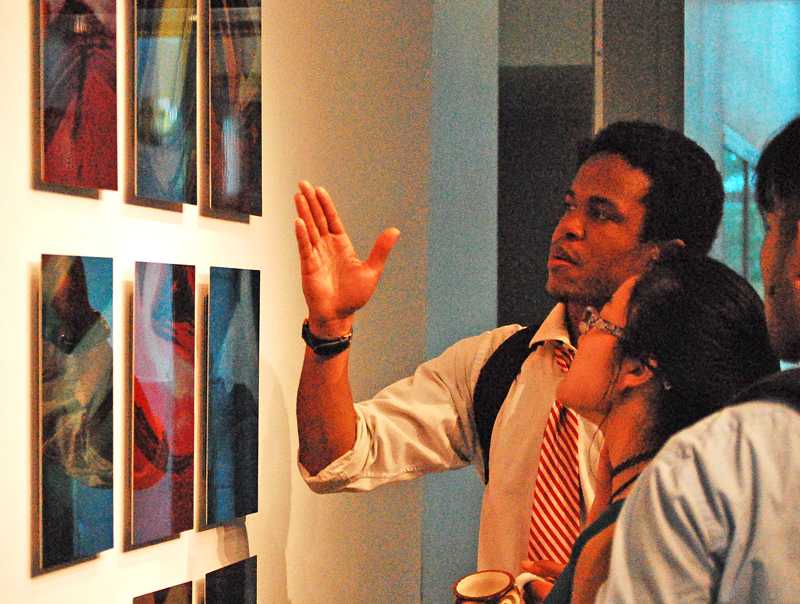 LMC art students viwing "Portrait of Artists as a Sucker" by Elizabeth Sher during the reception Wednesday, April 20.

Los Medanos College presented Elizabeth Sher’s exhibit “Crossing the Digital Divide,” in the art gallery Wednesday, April 20. The event showcased a variety of Sher’s digital art pieces including those that had a combination of both her digital and hand drawn and painted creations.

Sher said she does not like to think of herself as a “digital artist” but just simply an artist. According to an Essay titled “Elizabeth Sher: Some Kind of Nature” written by Patricia Watts, “Sher’s art is a creative expression of the ubiquitous manipulations of nature inspired by mankind’s imagination reconfigured in a digital world.”

She wanted students who were present at the show to enjoy the images and to think about where technology and nature meet in terms of making it and the concept of what’s going on with our world.

“I’m thinking about that with all this work also if they haven’t played around at all with any of these digital tools maybe I inspired them,” said Sher.

LMC Art Gallery Director Judi Pettite contacted Sher a few months ago to ask if she wanted to do the show. After she agreed she went to Sher’s studio to select which works would be showcased. Pettite selected the pieces based off of how well she knows the gallery and had an idea about where everything was going to go.

“I select the art work with all that in mind,” said Pettite, “then when it gets here I still move things around to see or if it make sense to have bigger pieces on the back wall and just move thing around until I gets it right.”

Sher said chose which pieces to exhibit at this show by presenting pieces she hadn’t shown before as well as having pieces that show the actual crossing of drawings and digitized art to get people to understand that drawing is apart of her process. She is trained in painting and fine arts but always admired mixed media and multiples.

“I kind of want my cake and eat it too,” said Sher. She continued, “ I like having one thing and then having different solutions for it, I call it ‘infinite possibilities and multiple solutions.’”

In this show, many of the visuals started with a digital image then Sher worked on them with the computer in a variety of ways. She said that Photoshop is what she used to create most of these varieties and that within the program, she uses a lot of layers in a couple of different ways– taking an image then copying it on to top of it’s self and then will make changes to it such as changing the color, making it sharper, blurrier, etc. Sher said this process is not easier or faster than painting but it takes the same amount of time and effort.

According to Sher’s husband Phil Schnayerson, her piece “Cisterna” started off as a photo she had taken of the cisterns underneath the plaza of Istanbul. It was about a thousand years worth of dripping that stained the walls, then Sher went in and manipulated the image, changed the colors, and painted over it to create what it is today. He said he likes how advanced the art is and how she can now she can take an image, captured by camera, and manipulate it on a computer.

“She started off as a print maker and a painter but when she started teaching at the California of Arts, she was one of the first people of her generation who was a working artist when they started making programs for the computer that could digitize and manipulate and image,” said Schnayerson.”

LMC students Sarina Sylva, Sharon Sim, and Micah Judah were in attendance and each connected with the art in their own way. Sylva enjoyed Sher’s “Liken Lichen” piece because of the explosive colors it presented and how the glitter made the piece as a whole cohesive.

“I think it’s amazing that artists are now not only picking sides of traditional and digital art but bringing them together,” said Sylva. She continued, “Their experience brings together both sides of the art.”

Sim said that she was fascinated by Sher’s work and felt very inspired and motivated to do her best with her own work. Judah, LMC Art Club President, thought the way she captured the metal object, as abstract in her piece “The Portrait of the Artist as a Sucker” was very intriguing.