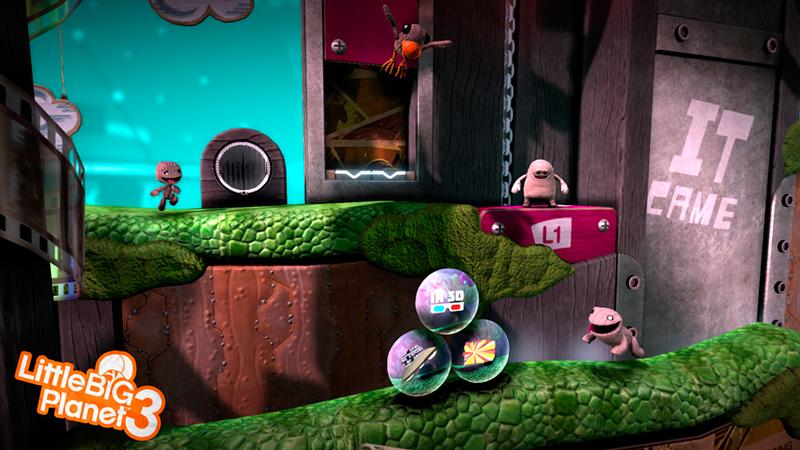 Sackboy is back and this time he brought three friends, Oddsock, Toggle and Swoop along for the ride in LittleBigPlanet 3. Together, the quartet must save Newton, an egomaniac inventor after he is possessed by three ancient Titans.

At the beginning of the game, you meet Newton, an inventor who kidnaps Sackboy and takes him to the world of Bunkum. Newton expresses the lack of creative juice in Bunkum. He unleashes three ancient Titans which in turn posses him, thus corrupting his intentions. In order to save Newton, Sackboy must then awaken three ancient heroes, which are the new characters in the game. They first defeated the Titans and now Sackboy has to go through different hubs within Bunkum to unleash and recruit the aforementioned heroes to save Newton from destroying the creative world of Bunkum.

First you have to finish main campaign levels to unleash marbles that when placed together will awaken the hero. You can also explore each hub for side quest and mini games. After you have thoroughly explored the hub you will be redirected to the next hub to unlock the following hero and so on. In each hub you will be given a gadget by the curator that must be used to fully complete each level. There are a total of five gadgets, although you will only use four.

The first hub is Manglewood swamp, there you will awaken the first hero, Oddsock, a dog-like companion that can jump off of walls and runs much faster than Sackboy. He can also jump from wall to wall to reach higher areas. You will meet the curator, Marlon Random, who assists Sackboy in finding the marbles to unlock Oddsock. He is the most active curator as he is constantly assisting the player. He presents Sackboy with one of the most fun power-ups, the blink ball.

With this tool, Sackboy can teleport himself from portal to portal to better assist him in making his way through the different levels that Manglewood has to offer.

Once Oddsock has been unlocked, Marlon Random will then send you off to your next destination, Ziggurat. There, you will meet the next curator Papal Mache. He is scatter-brained and forgets important information, like how to help you attain the marbles, but he does offer some encouraging advice to Sackboy. Another power-up is unlocked in this hub, the hook hat, which helps Sackboy attach to grind rails throughout each level. Once all three marbles have been found, the new hero is awaken, Toggle. This gentle giant is the much bigger companion, he is best for moving heavy objects, but can also become small to run through small tight spaces and walk on water.

Finally, you will move onto Bunkum Lagoon, it’s curator Pinky is a feisty lady, but she is also interested in helping Sackboy find the final hero, Swoop, a bird that can reach high places, lift blocks and grab other players to fly them to higher places.  In this hub, Sackboy will get the final power up, the boost boots, which as the name suggests gives Sackboy an edge by giving him an enhanced jump to allow him to reach higher areas.

Soon after you unlock Swoop the game comes to an end and although this storyline is less extensive compared to LittleBigPlanet 2 and the original, you still have fun in playing this immensely creative game, but the fun does not stop there. You can access the online community to play in user-generated levels, so possibilities are endless. Since creating your own levels can be overwhelming at times, LBP 3 has a new game mode, the popit puzzle academy, which introduces you to create mode for those who need a little extra help.

Like all new games, you will encounter some glitches such as getting stuck behind a layer or fall far down below the level requiring you to restart at the last checkpoint. Another annoyance that you could possible encounter is failure to respawn at your last checkpoint. This will force you to restart the level and lose progress. Besides those problematic encounters, the graphics of the game are incredible. There is never a dull moment especially when playing among friends. All stages are very different and offer numerous collectables. The only down side to the new playable characters is that they can only be played in the hub in which they were unlocked in. All in all LBP 3 is a fun-filled enjoyable game that you will want to play over and over again even after you have conquered the whole game.