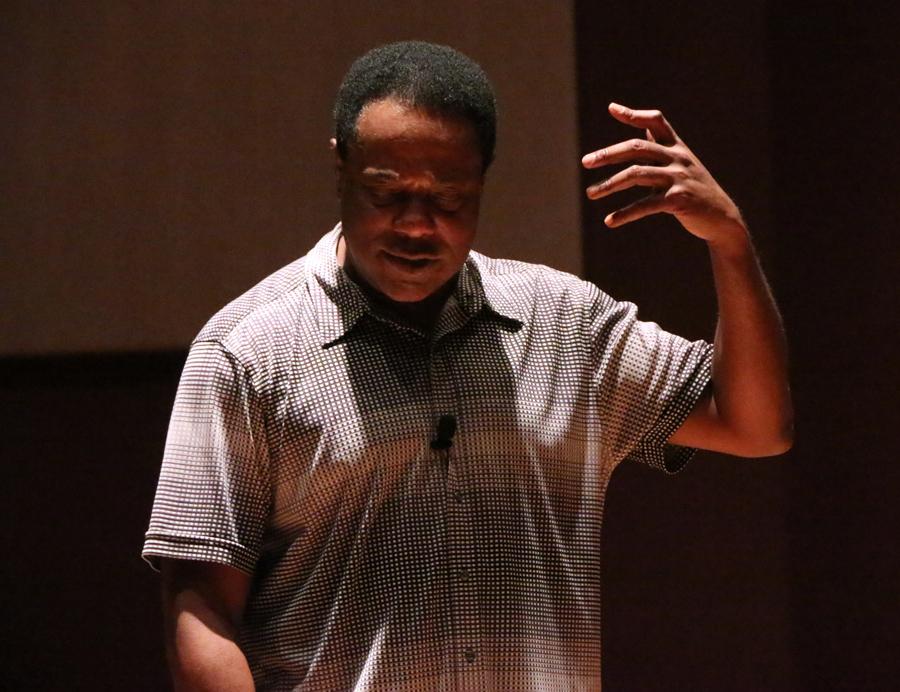 Brian Copeland performs during his special engagement in the LMC Recital Hall Nov. 12.

As applause erupted inside the Recital Hall Nov. 12, the audience rose to its feet to show its appreciation, compassion and respect towards writer, actor and comedian Brian Copeland. Copeland captivated a packed house of students, faculty and members of the community that came to watch the Bay Area native perform a special free engagement of his one-man show “Not A Genuine Black Man.” The show was a retelling of his experiences growing up in the area during the 1970s.
Moving back and forth between different periods in his life, Brian Copeland brings his past to life through the varied tones in his voice and demeanor of his stage presence. Blending humor, drama and an inspiring ability to morph between various characters, the many faces of Copeland’s performance have the ability to both delight and sadden the audience.
With an ability to engage an audience in laughter, levitate their spirits with his wit and on-stage humor, Copeland can immediately change direction, sending the audience into a sense of awe, leaving them watching silently as he retells the darker, more personal events from his life.
While the amount of “f-bombs” and subject matter may be inappropriate for younger ages, the theme of the show is one that all should learn from an early age.
“My mother really wanted white children,” the actor said in an upbeat tone. Delighted, the audience laughed and took it as another humorous moment in the show.
Expressed by a delicate, well-spoken tone and a soft touch to his chest, the portrayal of his mother left the audience feeling compassion towards his relationship with a woman whom had so much influence on his life.
It is not until later in the show that the true meaning of that statement, and the overall theme is truly expressed.
“Mother really wanted the respect white people seem to give each other based on their heritage,” said Copeland, rephrasing the account that his mother “wanted white children.” It was respect she wanted, for herself and her family.
From a small child, moving to a “99.99%” white neighborhood in San Leandro as an attempt to escape the horrible abuse inflicted by his father, to an adult man facing his own inner demons that eventually lead to the culmination of an attempt on his own life, Copeland’s story is a dramatic telling of just one-man’s experiences with racism and the overwhelming effects on his life.
Delightfully charming, witty and driven by a sense of personal experiences that will make the audience laugh and cry, Brian Copeland’s “Not A Genuine Black Man” is an excellent achievement that earns the actor, comedian, father and son the “respect” he deserves.