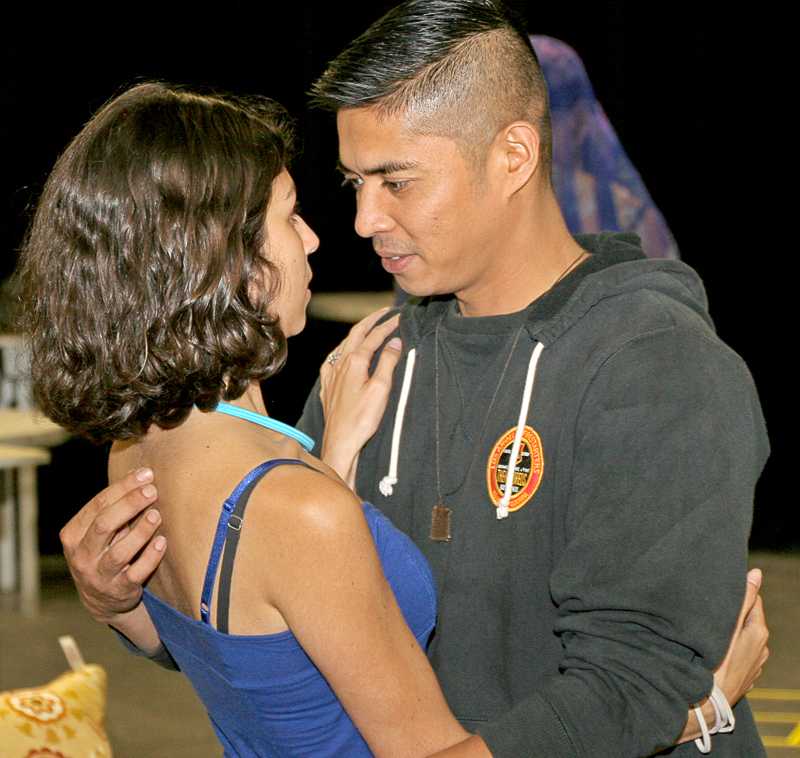 The LMC Drama Department is currently rehearsing for one of this semester’s upcoming plays. The first production, “Man of the Flesh,” is a modern interpretation of the classic tale of Don Juan and was written by local Bay Area playwright Octavio Solis. This play is to be performed in less than a month.

Portrayed by student actor Federico Bartolo, the character Juan is a young man who leads a life of promiscuity and debauchery. Juan does not care for the consequences of his actions, or the people he hurts. Throughout the course of the play however, Juan experiences the feelings of love for the first time, and through this, begins to understand the results of his actions through themes of consequence and death.

Marina Ketchum, who plays the role of Anne Downey, is the love interest in the show.

“I haven’t played a leading love before so I’m happy and ready for this,” said Ketchum adding,  “I’ve made a lot of connections with her and feel she is a strong character.”

A lot of work has been put into the show, including finding interesting ways to advertise. The cast thought of using social media to advertise the show by creating the “What Would Juan Say?” challenge. With this, each cast member makes a video telling their favorite pick-up line, and then challenges three to five friends to do the same.

“The cast is a good mix of people and I trust each of them.” Ketchum explained. “We’re almost done blocking so it’s coming together well.” She went on to add, “Amazingly enough, this may sound down and dark but it’s a comedy through it all. We lighten things up and make things like a party.”

Director Hugo Carbajal is aware of the importance of the show. With the writer having grown up in the Bay Area, it sends a message to the audience that their work here can be seen and appreciated, and it doesn’t take only having connections to make it in the industry.

“I chose ‘Man of the Flesh’ because it challenges the students to really show what they can do,” Carbajal said.

With Bartolo continuing to paint a picture of his experience, he says Carbajal isn’t afraid to tell you when you’re not giving it everything you have on stage.

“It is always a growing experience working with him,” Bartolo said. “Hugo has been a blessing to work with and great a person to know.”