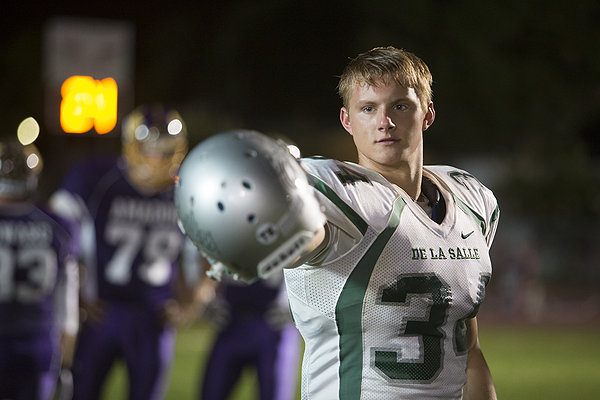 “When the Game Stands Tall” tells the story of local private school De La Salle High School and its 151 game winning streak. The film focuses primarily on Coach Bob Ladouceur, portrayed by actor Jim Caviezel, and shows the struggle between his relationship with his family and the relationship with the team.

Despite the strong messages of teamwork, family and modesty, “When the Game Stands Tall” manages to foul up any play they made to portray these themes in the film.

The pacing felt awkward for most of the film. A major character dies about a quarter of the way into the film, but due to almost no character development his death fell flat.

The big defeat happens early in the film, and is almost completely brushed off with only around ten minutes of moping. After a second defeat, the coach decides to have the team do volunteer work and help some war victims. Even though there weren’t many shown interactions, the team suddenly understands the importance of friendship and the film just carries on.

Characters weren’t fleshed out enough either. There was a lot of pointless angst. After suffering from a heart attack, Ladouceur can’t coach for a few weeks. Instead of his son being upset that his father almost died, he is upset at his inability to coach.

Certain characters were brought in only to never be discussed or seen again, and despite being about a “team,” you really only get to know about three members. All three members didn’t have a real personality; they were just overplayed character types in sports movies.

Tayshon Lanear, played by actor Jessie Usher, filled in the role of “egotistical player.” His only lines were about himself, and there was never any development on his background or why he feels the way he does about the team.

Actor Alexander Ludwig played the role of Chris Ryan, whose father always wanted Chris to work harder, score more points, etc. It was clear that they really wanted to build on the relationship with Chris and his father, but interactions weren’t seen until near the end of the movie. It needed much more development.

“When the Game Stands Tall” wasn’t sure what it wanted to be. It wanted to be a sports movie about teamwork, a struggle between a coach and his team, and a coming of age story. What the film needed to do was pick one of those three and excel there, instead of going for them all.

Overall, “When the Game Stands Tall” is essentially a bust. With too little development for characters, too much preaching and awkward pacing, it just didn’t score with me. If you want to watch an inspiring sports movie, stick with “Remember the Titans.”