Pizarro molds her own future 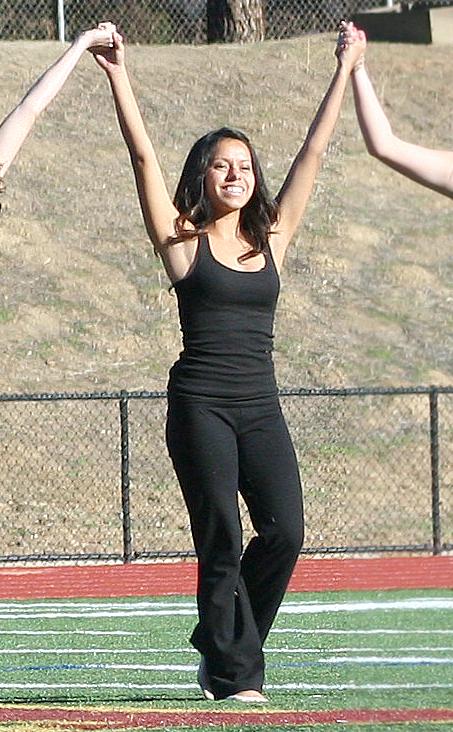 Fiona Pizarro stands in a dance line. While being a student at Los Medanos College, she was an active member of the dance team.

Fiona Pizarro, who immigrated from Peru with her family in 2007, almost cried as she sat in front of their television when the announcement came through. Effective Jan 1, 2012, she would be allowed to apply for scholarships, the California Board of Governors waiver and the Dream Act.

Pizarro, a mechanical engineering major, is a current recipient of the $8,000 Kennedy King scholarship, which is only given to minority students under-represented at four year universities, an award she wouldn’t have been eligible for prior to the new legislation.

Her story is similar to the children of many immigrants. She didn’t know she was undocumented until she was ready to go to college.

When she asked her father for her social security card for college paperwork, he told her she didn’t have one because they had come here on a six-month visa, which had long expired.

“At first I was really shocked and the word ‘illegal’ just made me feel as if I had committed a crime,” she said. “I felt like I was less than my friends because I did not hold any documents.”

Pizarro explained it wasn’t her fault because she didn’t realize she was undocumented until she came to LMC.

Her parents couldn’t afford tuition and because she didn’t have a social security card, she couldn’t get a state I.D. or license, financial aid, scholarships, or even a job.

That semester she did everything she could to help pay for her own education — asking for loans from other family members and even doing garage sales.

“My grandma helped me as much as she could and also my step grandpa, who I wasn’t really close to, loaned me a good amount of money,” she said.

After AB 130 and 131 were passed, she was given a special social security number that allowed her to get an I.D. and apply for financial aid, but to keep it she has to work and renew it every two years.

But getting permanent residence status is her top priority.

It will open more doors, said Pizarro and added it would be especially helpful for getting internships.

Sometimes engineering firms will only hire U.S. citizens or permanent residents because they think the might be spies from other countries.

Even though she is legally allowed to work and go to school, a representative who came to one of her classes was reluctant to let her visit the engineering firm but after her teacher explained the situation and she was able to use her passport.

Pizarro, who has been accepted into California Polytechnic State University in San Luis Opispo and the University of California, both Davis and Santa Barbara, is working two jobs while going to school part-time in her last semester at LMC.

She had hoped to get into Berkeley because it is closer to home but was not accepted.

“Berkeley and Cal Poly were my top choices, so I’m not sad,” said Pizarro.

Cal Poly has a really good engineering program, so she was really excited when she got the news via email while in the LMC library.

“I was so happy,” said Pizarro, adding she just wanted to scream when she read the acceptance email.

Her parents were just as thrilled.

Pizarro grew up in Lima with her parents and younger sister, where she studied ballet, played chess and discovered that she enjoyed math.

“I just find it more challenging than any other classes,” she said.

But becoming a female engineer in Peru is difficult. Men are the ones who usually receive their education and women are dependent on them.

At 15, her parents told them they would be moving to the United States so she and her sister would have a better life and more opportunities.

But she didn’t believe them at first.

They had never mentioned wanting to move to America before and she just remembered feeling really sad and surprised.

She kept asking, “Is this real?”

After flying into West Palm Beach, Florida, and staying for a week or two, they arrived in Antioch where they stayed in a room at her mom’s friend’s house for about a year before moving into an apartment and later to the house she lives in now.

The first year was hard for her sister, who missed her best friend, but even though the culture was different and she didn’t speak English, Pizarro didn’t have trouble adjusting.

“I wasn’t as depressed,” she said. “Everyone is nice here.”

High school in America was easier compared to Peru, where she wore uniforms and studied six subjects a day, a large portion devoted to math.

But she didn’t get good grades at Deer Valley High because, she said, she cared more about making friends, meeting guys and dancing.

Then after she graduated in 2010, she realized this was her future and needed to get serious.

Most people assume she is going to be a nurse, a hygienist or have a career in biology and are surprised when she tells them she wants to be an engineer.

Nursing was actually her first choice when she started college but she changed her major because nursing didn’t involve math or physics, which is her passion.

“So that’s why I picked engineering but I wasn’t sure what kind of engineering I wanted to do,” said Pizarro, until her freshmen year, when she used a 3-D software called SolidWorks, a program used by mechanical engine.ers.

“Everyone gets surprised when I tell them that I am doing engineering,” said Pizarro.

But she expected it to be that way.

There are groups like The American Society of Women Engineers because it’s harder for women to get engineering jobs.

“They support only women engineers because we are kind of left out from the engineering world,” said Pizarro.

In her dynamics class, she is the only woman out of six students.

“And it’s been like that in all my engineering classes,” said Pizarro.

It’s been hard for her and she wishes there were other female engineering majors she could relate to.

“They are different from me,” said Pizarro about the men in the program and she often ends up sitting by herself, while the men sit together.

She feels left out.

“I don’t feel like men in my classes treat me bad or even care about me being sometimes the only woman in class,” said Pizarro.

She thinks it is more of a psychological problem because, she said, most of the time when you think of an engineer, you picture a male.

When she told her friends what she wanted to do they responded, “Isn’t that a male career?”

“I guess you can compare it to a guy doing nursing,” she added.

At the beginning it lowered her confidence and when she goes to an engineering organization and sees only men, she said, it’s intimidating.

Only 14% of engineers in the United States are female, but compared to 5.8% in the early 1980s that is a big step forward.

Kurt Crowder, Pizarro’s dynamics teacher, said, “My Introduction to Engineering class has 7 women in it; they make up a third of the class, which is a huge increase over past years, so I think that things are starting to change for the better.”

He thinks Pizarro is an excellent student and likes having her in his course because she brings great intellect to the classroom.

“She answers questions in my Dynamics class that the guys cannot handle,” said Crowder.

Not only are women engineers scarce but they are boring and ugly, at least that is what Pizarro said she has been told, but she doesn’t see herself that way and never has.

Despite her interest in math from a young age, Pizarro has also been a dancer for most of her life. She studied ballet for years in Peru but left the country before going on to advanced levels. She continues to dance in the United States, not only ballet, but contemporary, lyrical and hip hop — almost any style.

“When I transfer I would like to try out for the school’s cheerleading team,” said Pizarro, who has also been an active member of the LMC dance team.

When people have doubts based on stereotypes about what she wants to do it only makes her stronger and more determined because she is doing well right now and, she says with a smile, “I am proud of myself.”

She acknowledges it is going to be harder for her in the engineering field because she is not only a woman but also a Latina.

“But that’s what I want to do, so I’m just going to do it,” said Pizarro, encouraged by statistics from Cal Poly. “I know that it is possible for a woman to get a decent job after graduating.”

She is just going to give her best in every project during her time at Cal Poly so that when recruiters come to the university they will hopefully see what she capable of.

Pizarro sticks with engineering because that’s what she really wants. It challenges her every day and she said she wants people to know that what no matter what happens, you should never give up.