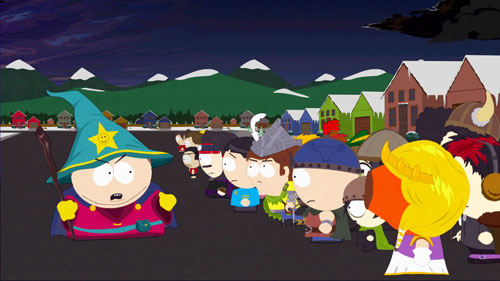 Screen shot of the new South Park game, The Stick of Truth.

South Park: The Stick of Truth is a turn-based role-playing game developed by Obsidian Entertainment and published by Ubisoft based on the popular South Park show on Comedy Central.

At the beginning of the game your character is the new kid in town and is looking to make some friends. His parents push him to go outside where he meets Butters, who is in a battle with another kid. Butters is the first friend you meet as you continue on the quest. Butters then takes you to Cartman’s house, who is referred to as the “Wizard King,” and takes you to Kupa Keep Kingdom, which is in his backyard.

Kupa Keep features an armory where you can purchase weapons, consumables and other power ups. At Kupa Keep you can choose your character name, although whatever you type in will have Cartman saying that you chose “Douchebag” as your name. You can then decide on four different player types, a fighter, mage, thief or Jew.

The game features a smart phone that is carried by the player where you can view quests, your inventory, your net worth (the amount of money you have) and keeps track of friends you meet as they post messages on a Facebook-like wall sporadically. On the smart phone you can also call up a map of the area and view collectables you gather throughout the game.

In your inventory you can equip different weapons and items you either buy or find as you continue to level up. In order to level up you must complete quests and fight off the elves that are trying to take back the Stick of Truth hidden at Kupa Keep. The stick is indeed exactly what it implies, just a stick.

The game as a whole is extremely smooth and well done. It really is only meant for fans of the actual show, as there are a lot of callbacks to things that happen on it, but players new to the world of South Park will still enjoy the game as long as the comedy is up your alley.

The dialogue really sets the show apart from other shows, and the dialog in the game is what sets it apart from anything that may be of a similar ilk. Trey Parker and Matt Stone, the creators of South Park, contributed heavily to the dialogue, and it shows. The game is absolutely hilarious. While your character does not actually speak, the favorite South Park personalities around him are an absolute riot.

The actual gameplay is fun and easy to maneuver. Just walking around and looting other peoples houses or businesses around town is the best way to collect little items you can use to customize your character’s looks and other abilities. As you travel around town you receive quests from many of the South Park characters such as Priest Maxi who tells you to literally find Jesus and Tweak who tells you to go to Kenny’s house to collect “fresh” ingredients for his parents’ coffee business, Tweaks Coffee Co.

My only quibble with the game thus far is the fighting system, for the most part it is difficult to lose any battle you may find yourself in, but the timing mechanism tends to be hard to get used to. When a player does any kind of an attack, you have to press the correct button at the exact right time, usually in correspondence to the flash of a light or other general timing elements, to inflict the most amount of damage. I feel as though the leeway between a perfect attack and a weak attack is too little, and if you are a split-second off it greatly reduces your chance at a strong attack.

All in all, the game is one I would recommend to fans of the series. If you are new to the series, I would be cautious in trying the game as the general humor is staunch and to the point, but that is how it should be and makes you feel like you are in an episode of South Park.