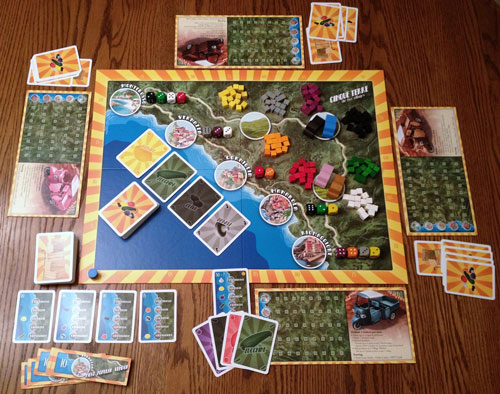 Cinque Terre, by Rio Grande Games, is a strategy game where players collect different crops such as tomatoes and olives and sell them to the five different coastal villages of Italy, fulfilling specific produce orders at different villages.

Before playing, I initially thought the game would have too many similarities to the likes of Settlers of Catan, but it certainly did not.

Cinque Terre offered its own unique style of the collecting then building or selling strategy genre.

The scoring system is unique.

Colored dice to match the different types of produce are rolled to begin the game and placed down on different villages to signify how much a crop is worth at that village. Fulfillment cards will tell you what to sell in what village. Players can also attain a Most Popular Vendor card if they sell enough produce at a single village. The end of the game is triggered by the player that collects and completes a combination of five fulfillment and MPV cards.

Despite little player-to-player interaction, the game is entertaining and easy to learn once you start playing.