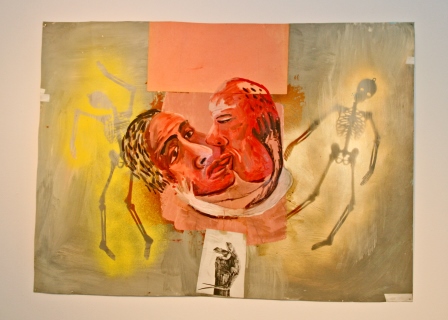 Have you ever seen a picture and wondered, “what was the artist thinking?” What exactly do you consider art? Everyone has their own idea of what art should be. Who remembers the dogs-playing-poker picture? To some that is art. Some say, “the piece just called to me,” while others just like the colors or patterns. Some art is controversial in subject matter, while others are a bit ordinary but so colorful you can’t help but like it on the spot. The LMC art gallery is showing pieces by visual artist Cate White, from Oakland, who has done some rather interesting pieces. For instance, on closer inspection “The Treasury of Gods” is the cover of a book with lips cut out of a magazine, organized in such a manner they look like a face with a closed eye. At first glance it looks real. “I make drawings, paintings, altered objects and videos populated by heroic derelicts, awkward lovers and dignified losers. Drawing from outside art, punk, neo-expressionism, comics and media clichés, the work speaks from and to the marginalized aspects of the self,” said White in a statement sent to Gallery Director Judi Pettite White has an interesting way of looking at the world and tries to express this in her work. Her pieces can be graphic in nature and touch on gender and race narratives, religion, art historical and even sexuality. With each stroke she brings her picture to life. She uses several different mediums, sometimes in the same picture. While the meaning of White’s art can be taken differently by everyone, there is no doubt she shows great vision. I’m not an art expert, but I know what I like. I did like several of White’s pieces. “Dead or Alive” shows a person lying on a rock with a sun above him. The brightness of the sun plays well against the dark backdrop. But there is an old Mac computer playing videos as you look at the art on the walls, and it made me feel a bit uneasy. I believe White has a great way of showing the world around us and making you think. I would suggest checking it out and forming your own opinion. The LMC Art Gallery is open Tuesday,Wednesday and Thursday 12:30 to 2:30 and 4 to 6 p.m. located in the library building.