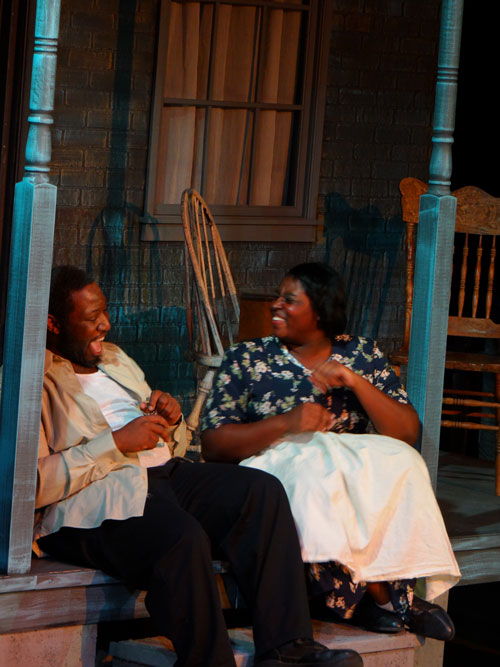 The play cultivated real life issues and hit close to home with outstanding performances by the entire cast. It captured what life was like for a former African-American baseball player of the 1950s, struggling with his sons “modern world,” being “liked” in society and him getting scholarships in football.

Many emotions were visible such as love, comedy and betrayal. The 6-8 week rehearsal period paid off brilliantly. There was approximately 50-70 people in attendance who were intrigued and active when it came to certain moments, such as Gabriel Maxson  (played by Xavier Ali Travis) giving Rose Maxson (played by Arionna White) a rose “like a rose you is.”

The production team did a great job with the set, technical things and lighting. The house alone was believable and it told a story without speaking.

“The play is called fences because we as humans build fences for two reasons,” said Professor Nick Garcia,  “ to keep things out or keep things in.”

The play revolves around a fence, which symbolizes Troy Maxson’s (played by Olinza Headd) struggles as a baseball player from the 1950s who has missed his chance, and the modern world of his son Cory Maxson (played by Mario Castillo), who he is holding back.

The 7 dollar ticket (with ID) was worth the watch. The audience connected with the characters, emotionally and dramatically as though they felt each character’s pain. The tension was felt and held throughout the 2 hour and 30 minute play.

“So the piece exceeded all of my expectations,” said Moses Lawson. “It was really a show that I felt I could connect with and I think others who see the play will feel the same way too.”

The eight-person cast did a fantastic job of establishing each character and showing the change of times through different eras. That necessitated multiple costume changes, which they did with great speed. The major highlight of the play was Olinza Headd as Troy Maxson. His performance led the audience to feel the tension and the build up of the character. Maxson’s famous line was “you got to take the crookeds with the straights.”

Du’praiseja Smith did a great job as Raynell Maxson, showing the reluctance of the character. Despite the small role, it held a major significance and strong impact with the audience.

Overall, the play was outstanding and it didn’t disappoint. “Fences” is a play that I recommend because you can relate and it hits close to home.