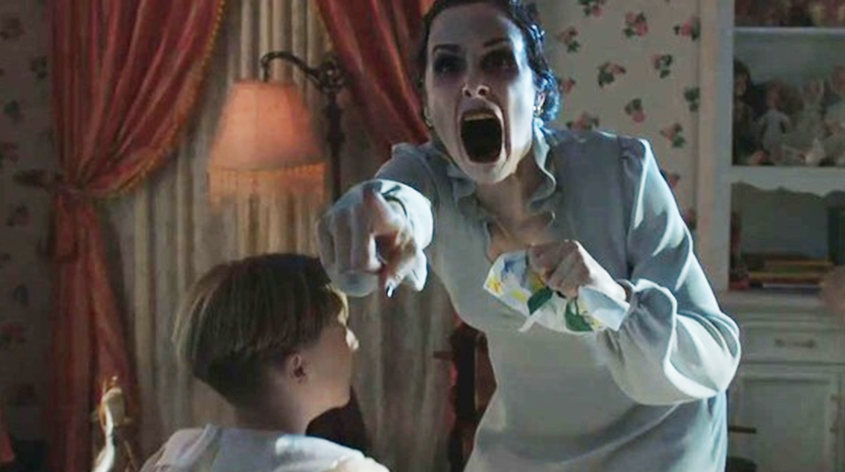 A scene from Insidious 2

If you plan on seeing this movie I recommend you see the first because Insidious: Chapter 2 starts off where the last one ended.

The movie starts off with a flashback of Josh Lambert that references to the first movie. This movie does an excellent job of connecting full circle with the first one.

This horror film is full of surprises and will make you jump out of your seat several times. Often times horror films have lame pop-outs, but this movie has horror that will not only scare you but will disturb you in some scenes.

Just when things get intense, Specs (Lehigh Whannell) and Tucker (Angus Sampson) do one of the best jobs with the comic relief. My heart raced after an intense scene and the duo never failed to come in at the right moment to relieve the tension.

This movie tugged on many of my emotions and if you are looking for a good scare and true horror film then I would without a doubt recommend this movie.

Insidious: Chapter 2 blew the doors off the expectations I had for it. After watching the first Insidious, I wasn’t impressed. But this sequel is an amazing comeback that is far superior.

Chapter 2 approaches a sequel in the way a book approaches a new chapter. It starts exactly where the first one ended, which is a rarity in the cinematic industry.

Unfortunately for the Lamberts, the hauntings continue as they realize that when Josh saved his son by returning from the “Nether,” an area between life and death, something came back with him.

This movie has several great plot twists and some elaborations upon the first movie.

There are countless scares that range from cheap thrills to the fear that settles in the back of your mind and reawakens when you attempt to sleep later that night.