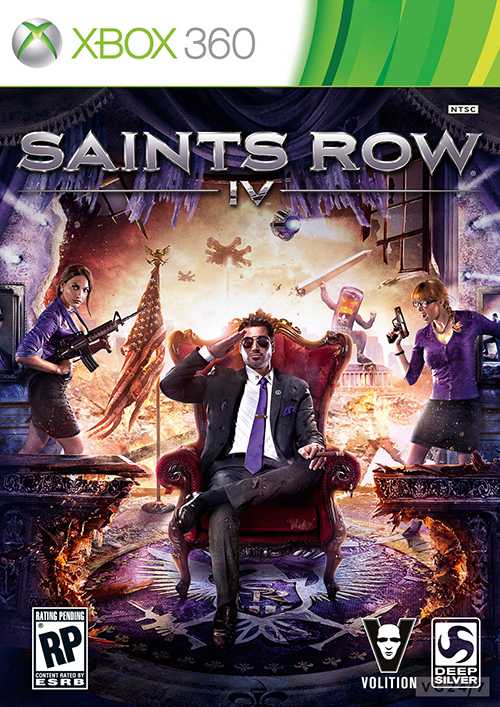 Saint’s Row IV is the fourth game in the series and it does not disappoint. It was developed by Volition, Inc. and published by Deep Silver. It is available to play for Microsoft Windows, Xbox 360, and PlayStation 3. I played it on the Xbox 360.

After playing the first three games in the series I was unsure how the series would continue but Volition, Inc. delivered and made an outlandish but addicting sequel.

As if this isn’t unbelievable  enough already, an alien emperor by the name of Zinyak attacks Earth and takes many people prisoner, including the leader of the Third Street Saints and his cabinet members.

This is the point where the game really takes off and the action gets started. Emperor Zinyak holds everyone in a simulation with their worst fears using alien technology. The catch being that once you overcome your nightmare, you have the ability to gain superhuman powers such as super speed or telekinesis. The leader of the Saints is a self-proclaimed badass and overcomes his nightmare, which is not being with his gang members. Early on he overcame it and gained his superhuman powers.

If you’ve ever seen the movie “The Matrix,” then I’m positive you’d like this game. Many aspects of this game share similar characteristics. If you’re a sci-fi junkie, then this game was meant for you.

Once you obtain superpowers, the players feels as if they are invincible, which in a way could be both a good and a bad thing. A good thing for the obvious reason that it makes eliminating Zinyak’s henchmen and other enemies loads of fun, but also a bad thing because at points it can make the gameplay a little too easy. That being said the game does have an element of difficulty when it comes to boss battles.

The length of the gameplay is on the longer side, which is good news for games, because it provides hours of fun.

The weapons in the game will make you say, “are you kidding me?” at first, but once you actually use them it makes the game interesting. Guns such as the “Dubstep Gun” which fires every time the bass drops makes for interesting firefights. There is even a weapon called “The Penetrator” but I think I’ll let you figure that one out on your own.

The graphics aren’t great but they’re not bad either, but let’s face it, the outrageous but fun gameplay outweighs the graphics.

It isn’t necessary that you play the first three games in the series in order to play Saints Row IV, but it does help to understand inside jokes throughout the game.

Saints Row IV is an exciting game that will keep you entertained. If you’re looking for a realistic game, then this isn’t the game for you. Otherwise I would highly recommend this game as the gameplay and action is very addicting.