‘Evil Dead’ not as good as the original 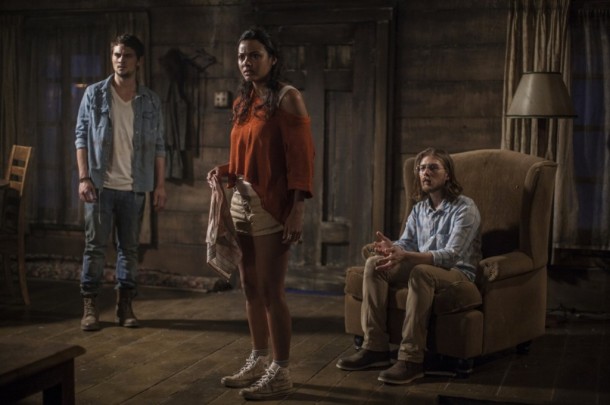 “Evil Dead” is a remake of “The Evil Dead,” which was released in 1981 to rave reviews. The idea of the series was to not only scare people, but also make them laugh. The idea of the trilogy (“The Evil Dead,” “Evil Dead II,” “Army Of Darkness”) was to take a genre that is normally scary, like a zombie, paranormal or demonic theme, and twist it into something funny and ironic.

While the 1981 version certainly has not aged too well, it’s still definitely better to watch over the remake. The original version spawned the career of famed Bruce Campbell, while the newly released one is, for the most part, full of actors who quite frankly should not be acting.

In the film, Mia (Jane Levy) is trying to break a drug habit and goes to a cabin with four other friends in order to help her in her first few days of being cold turkey. A “book of the dead” is found in the attic, and the contents are read which arises the evil within the cabin.

Jane is really the only actress who was decent in the movie. Everyone else was trying to be way too serious. Framing a somewhat over-the-top and comedic movie with actors that are taking every word and scene to seriously just does not jive.

If you are a fan of gore and loads of blood, then this would be a recommendation, otherwise I would steer clear. I would lightly compare it to a “Cabin in the Woods.” While some of the movie takes cheesiness to a whole new level, there is still some enjoyment in the irony that does not get lost in the acting.